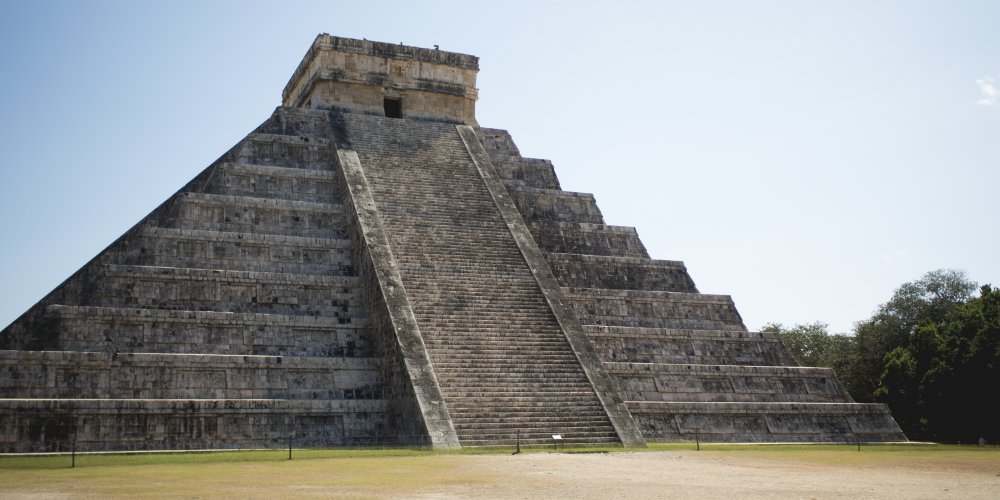 Though it may look like we lounged on the beach for most of our holiday, we were actually busy ticking things off our bucket list!

While beach lounging and a constant stream of cocktails is reason enough to head to Mexico for a beach-side break, I was personally incredibly excited to check off some travel bucket list items and adventure out into the Mexican jungle away from the resort.

The temples at the ancient Mayan archeological site of Chichen Itza are in fact one of the New Seven Wonders of the World (along with The Great Wall of China, the Pyramid of Giza in Egypt, The Colosseum in Rome and others).

The site is situated in the Yucatan jungle, a 2 and a half hour drive from our hotel in Riviera Maya. In fact, it’s in a totally different peninsula, with a totally different time zone! Quintana Roo (where our hotel was) is one hour ahead of Yucatan, so we had to adjust our watches to make sure we got picked up at the right time. 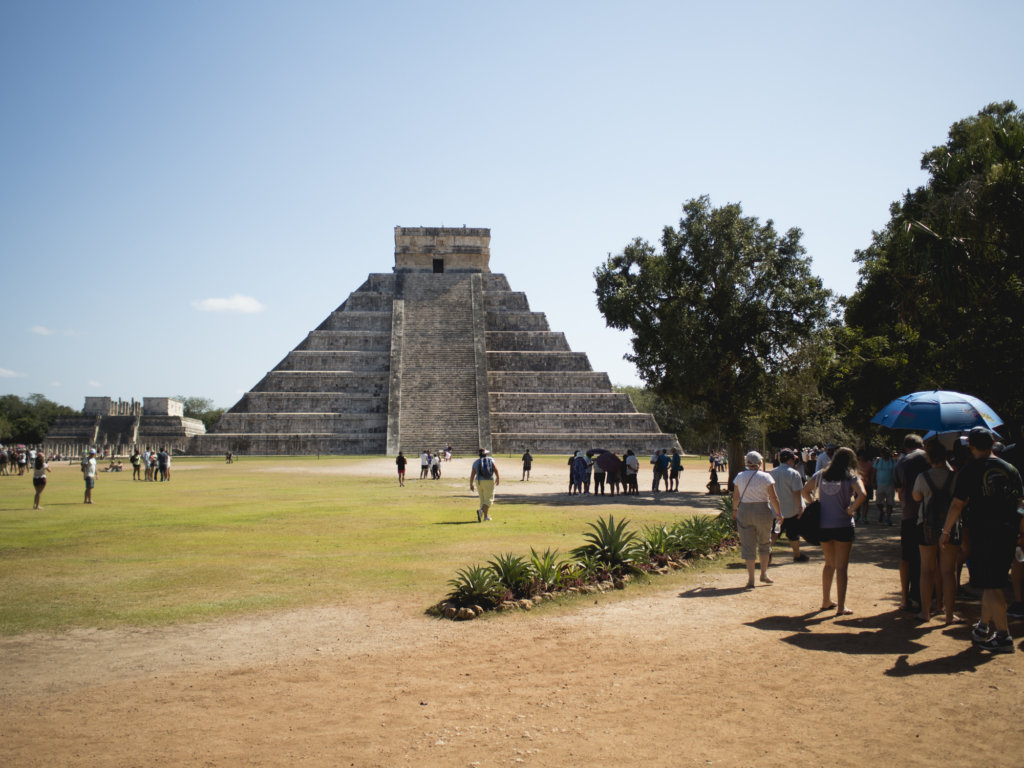 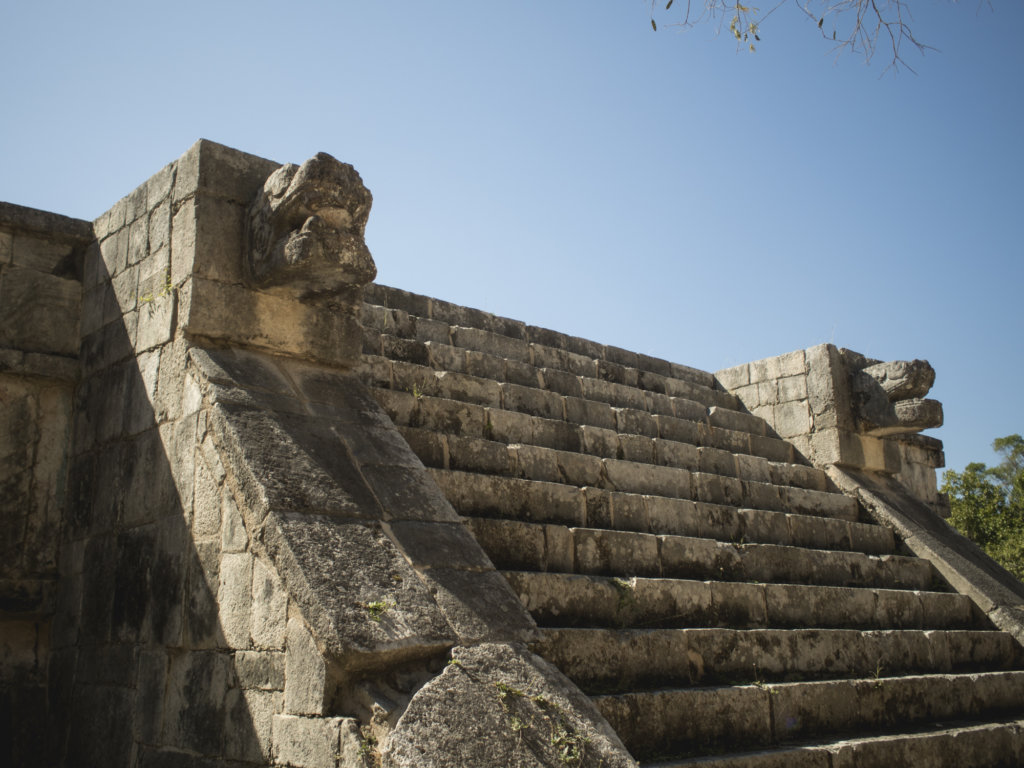 The jungle felt infinitely hotter than the coastline, which most days had a strong refreshing breeze to help cool you off. There’s not much shade around the temples either, so bring a ridiculous amount of water if you go (because having to sit on the floor from feeling light-headed in the middle of a tour is pretty embarrassing…). 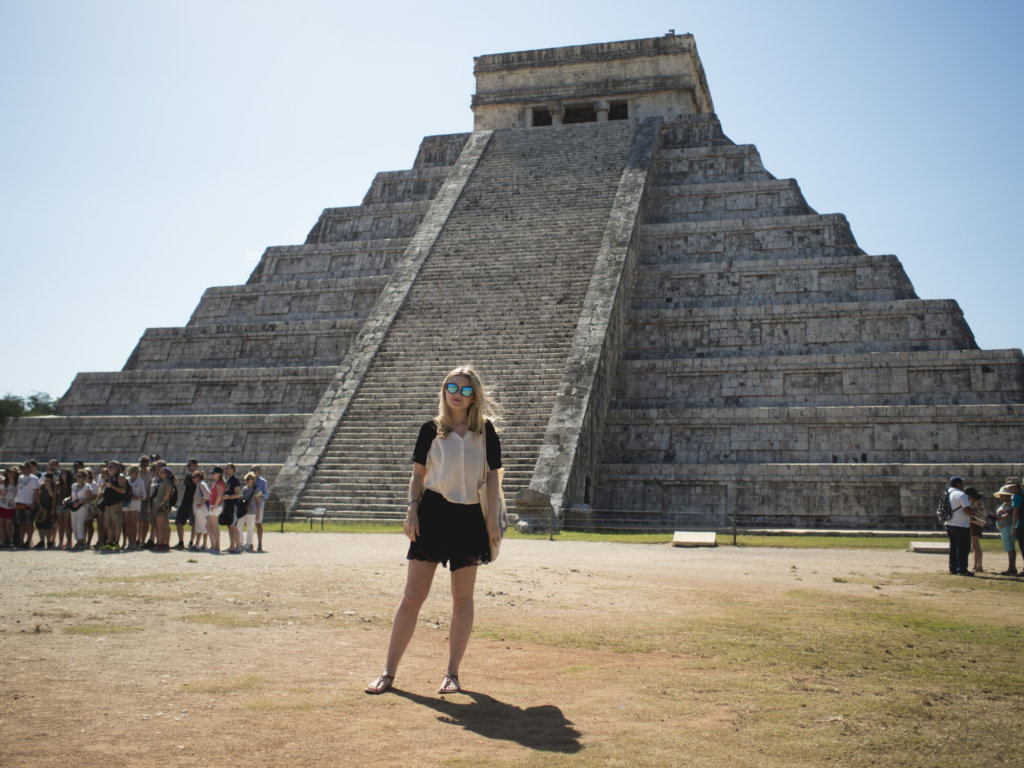 This was the first ‘Wonder of the World’ I’ve ever seen, and I’m excited to tick off more! These limestone temples were incredible to see, and it was humbling to travel through today’s Mayan villages as well and get a sense of a really amazing culture.

Anyone who has been on the travel section on Pinterest will recognise a picture of a cenote (aka. a natural underground sink hole). They are insane just to look at, but I’ve always wanted to swim in one too! 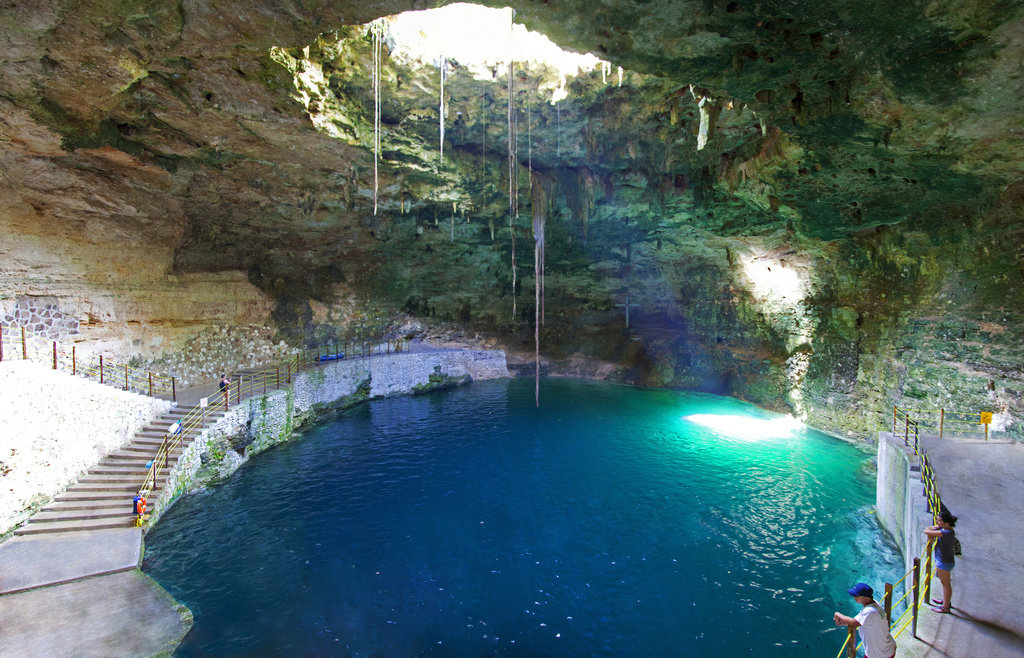 There are hundreds all around the peninsulas of Yucatan and Quintana Roo, both small and large. The one we visited was called Cenote Hubiku, and honestly it was so much bigger and more jaw-dropping than I’d imagined!

The water was so clear, and seemingly infinitely deep (in fact the actual depth is around 27 to 30 meters! Pretty impressive!). I was expecting it to be freezing cold, because the water is filtered up from subterranean rainwater rivers, but it really wasn’t bad at all. Nothing like the Atlantic ocean anyway! 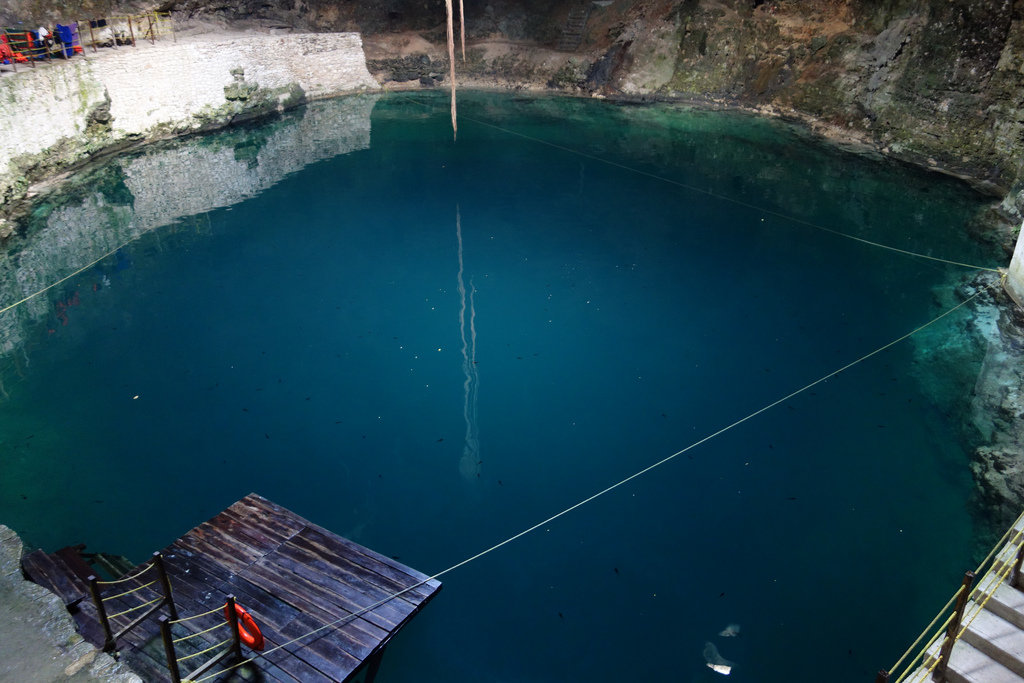 And yes, we got to swim in it! Unfortunately I didn’t get any photos of us swimming in it, but I got some video footage instead (see the YouTube video at the bottom of this post!). I’d normally never ever consider going out of my depth, let alone get in a body of water where I can’t see the bottom – it’s what my nightmares are made of!

However, I figured it was probably safe, seeing as it’s just fresh water and hundreds of people visit each day without being eaten by monsters, so I did it! Also it’s a one of a kind opportunity, so I couldn’t pass it up, could I?

This experience was very high on N’s bucket list, so we did some research and journeyed from our hotel to Akumal Beach with our snorkels. The bay is famous for spotting endangered green sea turtles (they have around 40 – 45 in the area), so we thought it would be our best chance. 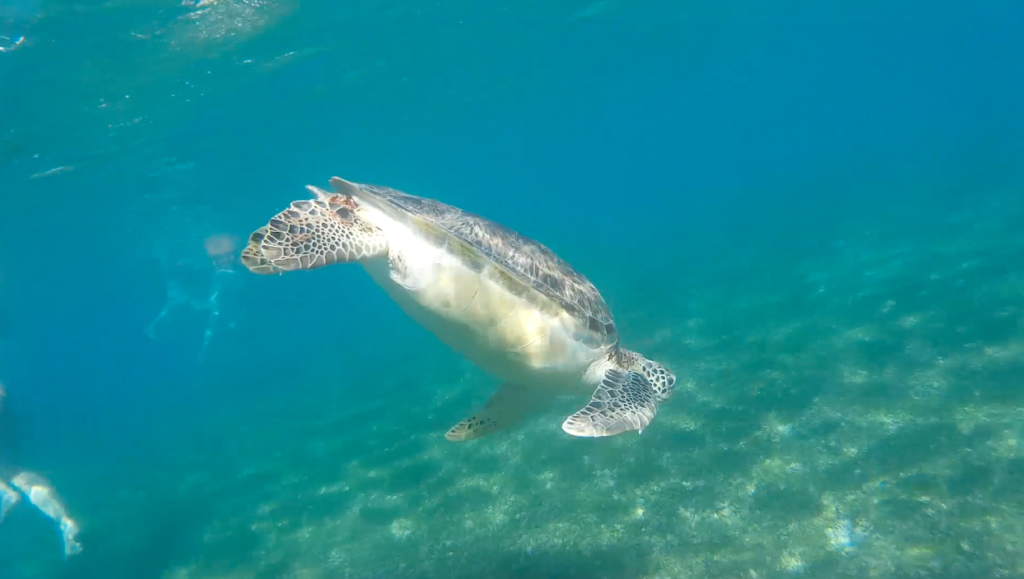 We were expecting to have to swim out far across the corals to see any, and even then we thought we might just see one or two, but incredibly just a hundred metres or so out among the seagrass, we came across a group of 5 or 6 of them!

The largest we saw was about 1 meter in width, which was incredible – and they move so gracefully! They also really weren’t shy at all; swimming just inches away from people and not seeming to care about our presence. 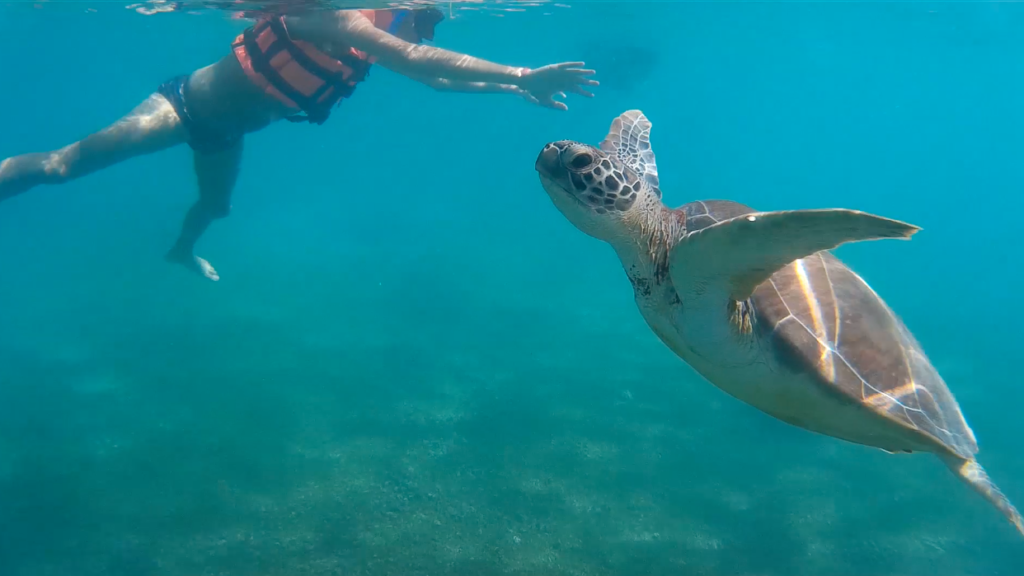 However, we made sure not to get too close. Sadly this species is now globally protected due to hunting, but many of them also die each year from tumours which grow when they come into contact with chemicals – even just toxins from suncream or lotions on human skin.

A couple of times we actually had to swim away from them in the opposite direction as they were coming so close as they went up to the surface for air. Very hard to do when you’re in a life jacket, but the last thing we’d want to do is disturb them or harm them. 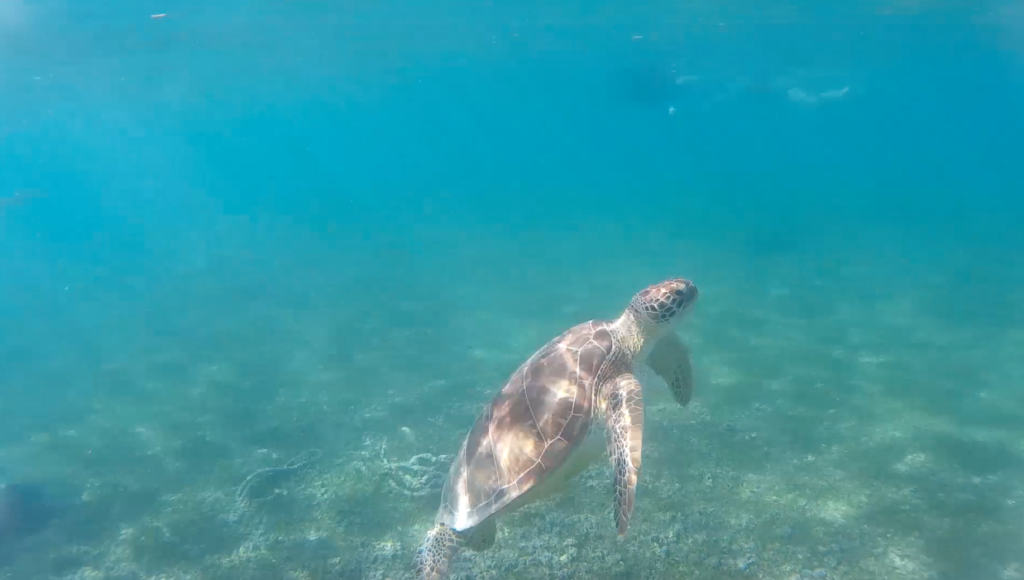 It was a truly a magical few hours and I’ll never forget it – so peaceful and amazing to watch these creatures in the wild!

Watch our Mexico travel vlog for clips of our Chichen Itza visit, cenote swim and the sea turtle snorkel adventures: 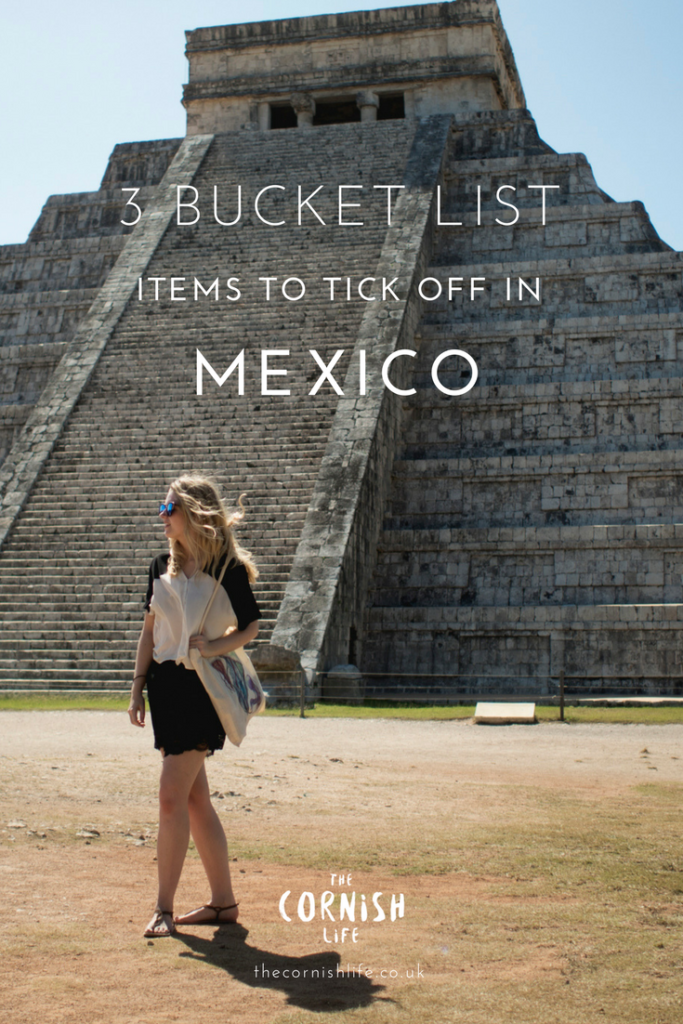 ← Misconceptions About Cornwall and Cornish People
How do you de-stress at the end of the day? →