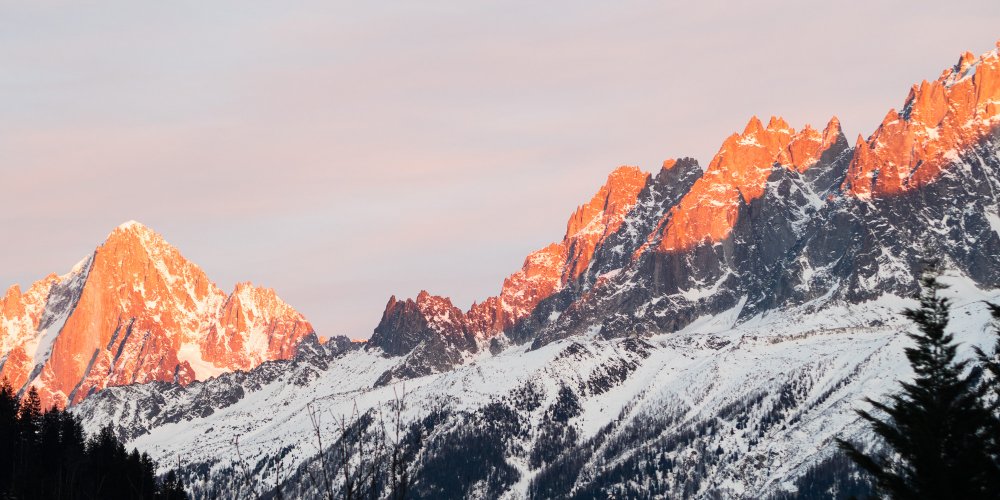 We’ve just come home from a week skiing in the French Alps near Mont Blanc.

It was my third time skiing, and if you read my ‘A Very Snowy Trip to Val D’Isere’ post, you’ll know how nervous I’ve been on my first and second times away. However, towards the end of last year, something was starting to click, and this year I’m proud to say I’m now a fairly proficient ski-er, going down Blue slopes happily, and I even tried a Red slope (albeit a small one) by the end of the week too! 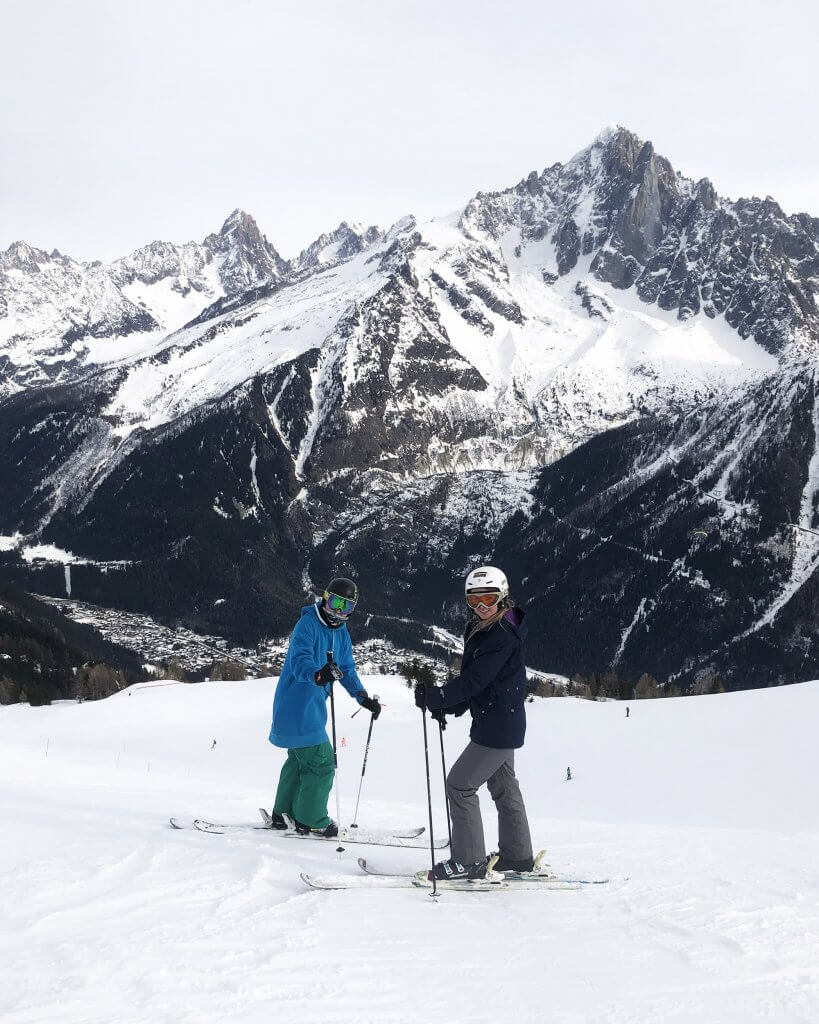 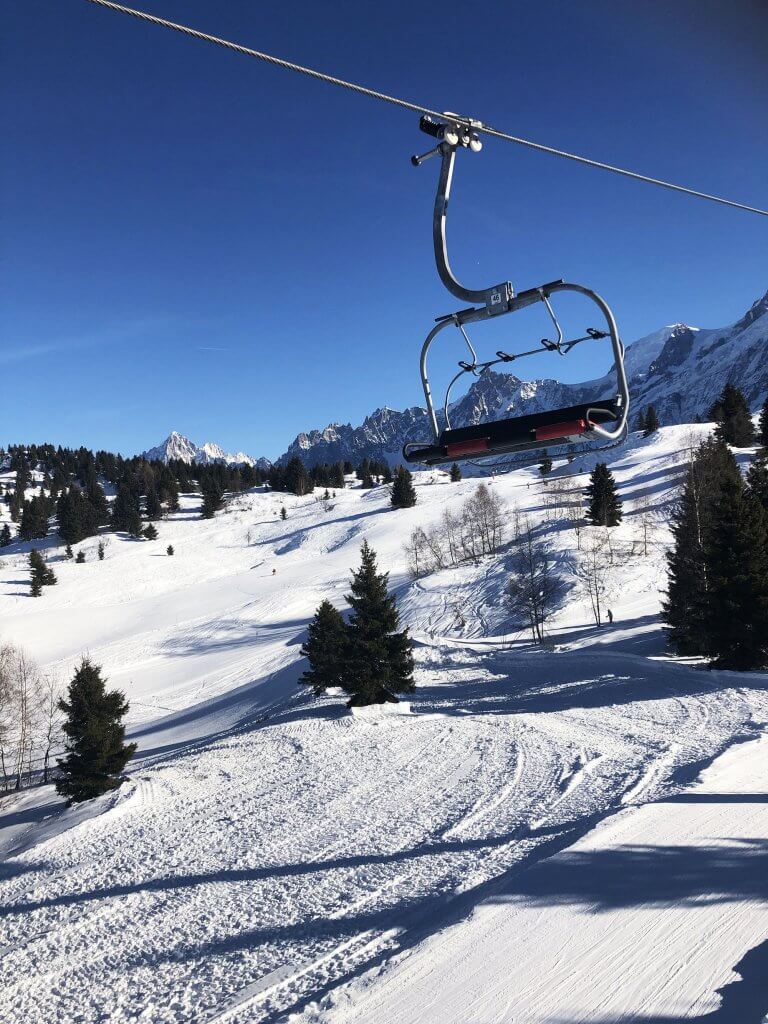 Yes, there may have been one mid-slope breakdown, but compared to previous years that’s pretty good going 😂, and in my defence I’d had an awful night sleep the night before and was extremely tired!

Anyway, I thought I’d share my thoughts and recommendations of the areas we visited during our trip, in case it helps anyone else going around Mont Blanc for their skiing… 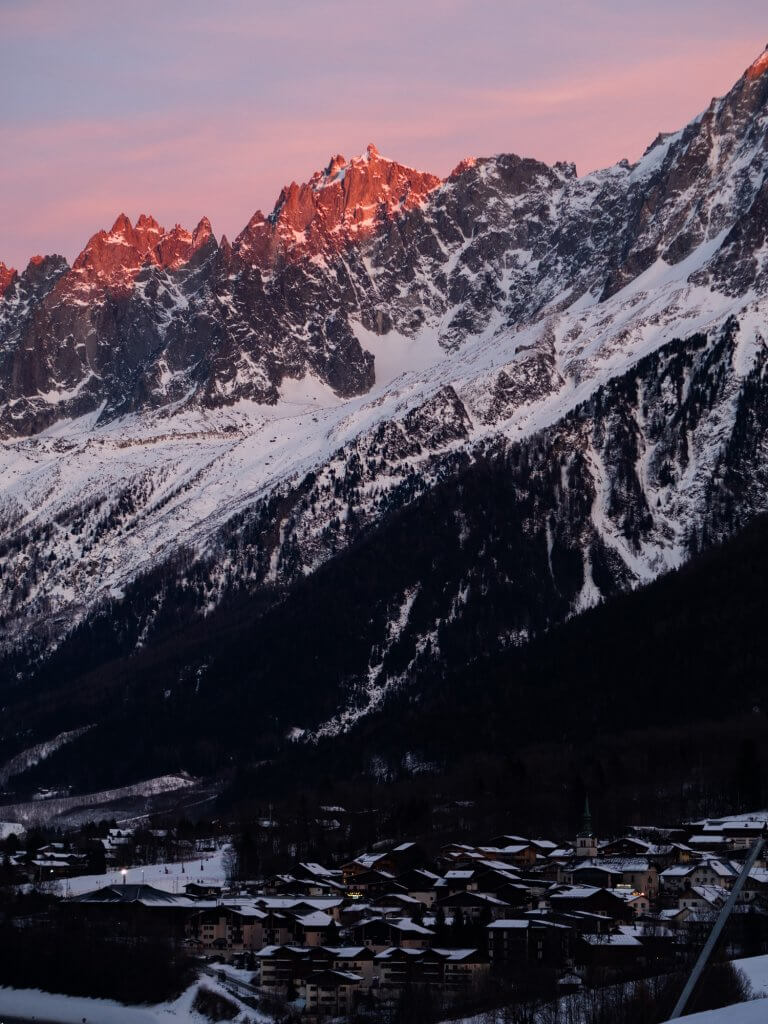 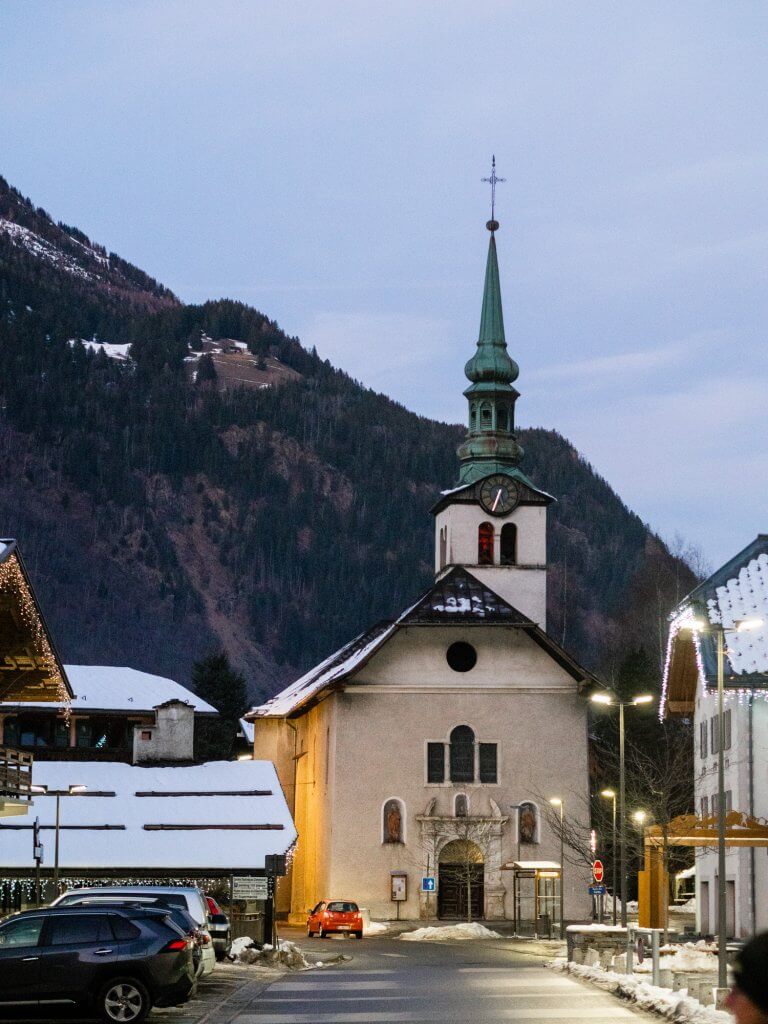 Where we stayed, equipment, & transport

Each year we go away with Alex’s family, who organise the chalet on a website called Love Home Swap; it’s an awesome idea for trading people staying in your home (or holiday home) for you to go and stay in theirs! I would definitely recommend having a look (especially if you happen to live in Cornwall like we do – which is a sought-after holiday destination).

However that being said, because I didn’t book it myself, I don’t have the link for the apartment we stayed in, but it was in Les Houches, about 100m away from the Prarion ski lift, which was super useful!

What was also incredible about this trip was that Alex’s parents actually drove across from Cornwall the week before, so we had a car for the whole trip to drive to the different areas. However, there are plenty of buses available in all these places.

In terms of equipment (because I don’t own my own gear), I hired from Battendier Sports which was opposite the Prarion ski lift. This was the cheapest place and also the easiest/closest, plus they have lockers there if you don’t want to walk back and forth in your ski boots. It cost around 130EUR for 6 days (Beginner skis, ski boots, poles & helmet). 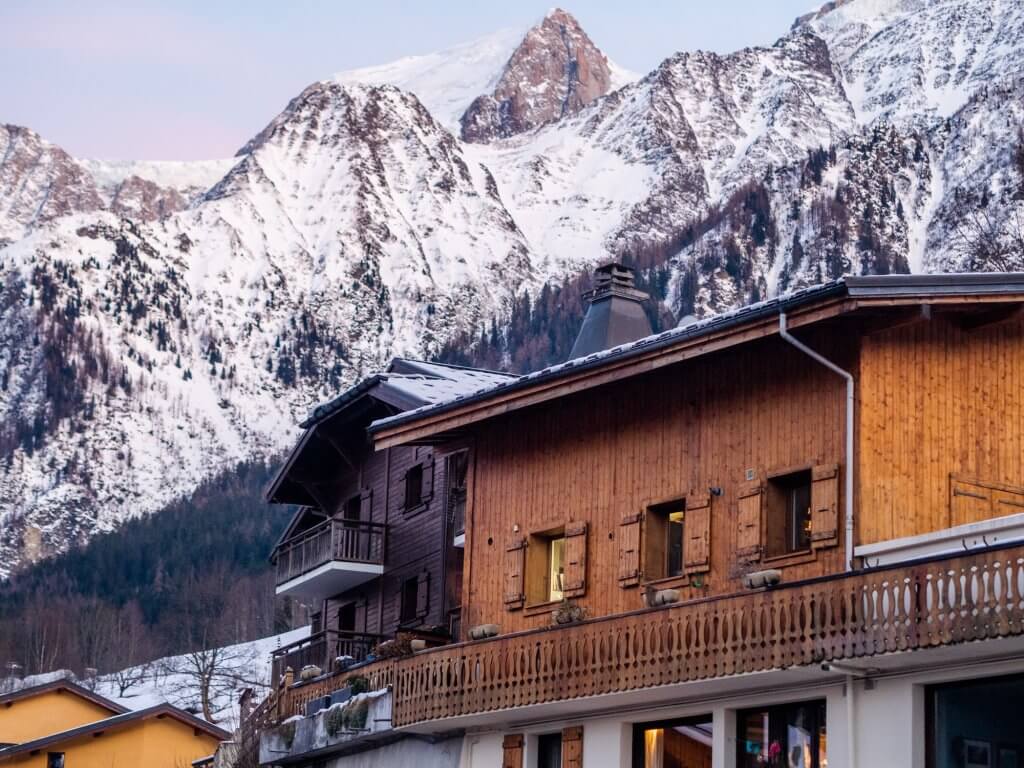 I think the Les Houches ski area was my favourite of the week. Alex and I ended up going there three days out of the six, and I’d say it was perfect for my level of skiing. Not a total beginner, but someone still finding Blue slopes pleasantly challenging. The lift passes were 40 – 45EUR for 1 day.

This area is also where I tried my first (and only) Red slope, which was super short and basically easier than some of the harder Blues I’ve done, but still a good one to start on!

Each time we went we made sure to stop for a hot chocolate or Vin Chaud at La Cha restaurant, which has a truly beautiful view. 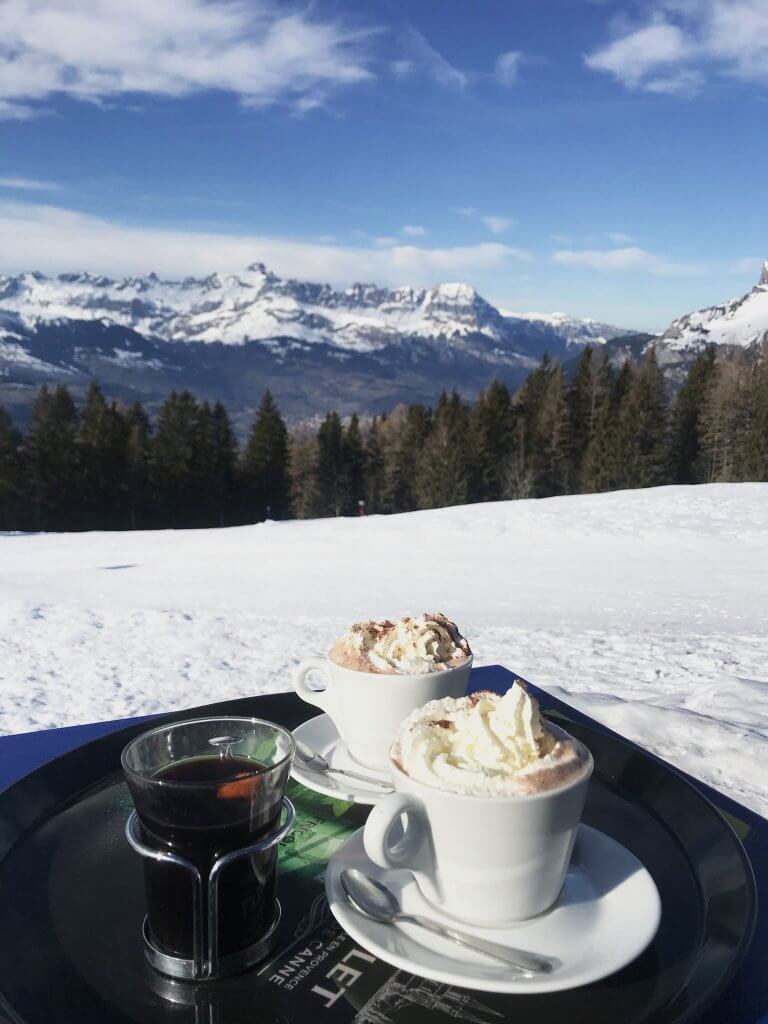 It was Alex’s dad’s birthday while we were away, so we headed out one evening for dinner at La Delice in Les Houches. Their menu got us all really excited and we all found it really hard to choose, due to their unique Asian twists and awesome vegetarian options.

I had the crispy tofu satay starter (vegan), followed by cauliflower katsu for main course (vegan), and both were incredibly tasty. Probably the best vegan food I’ve ever had! Would definitely recommend if you’re looking for something other than classic Alps food of meat, bread and cheese 😂 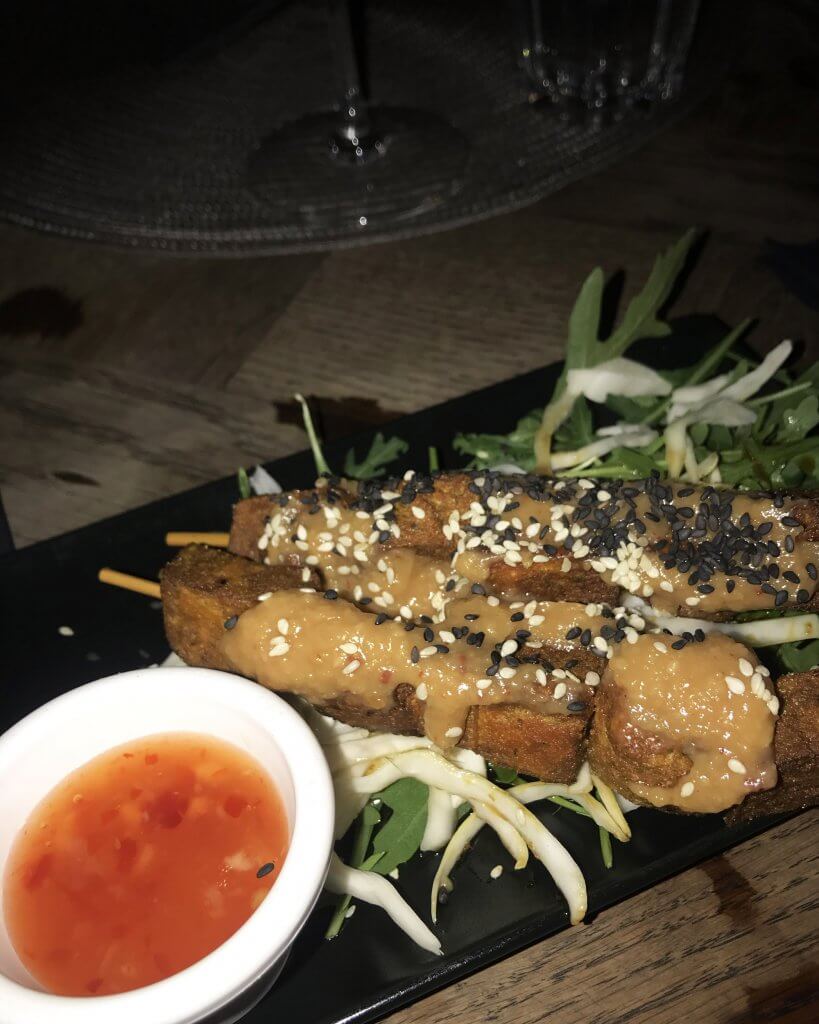 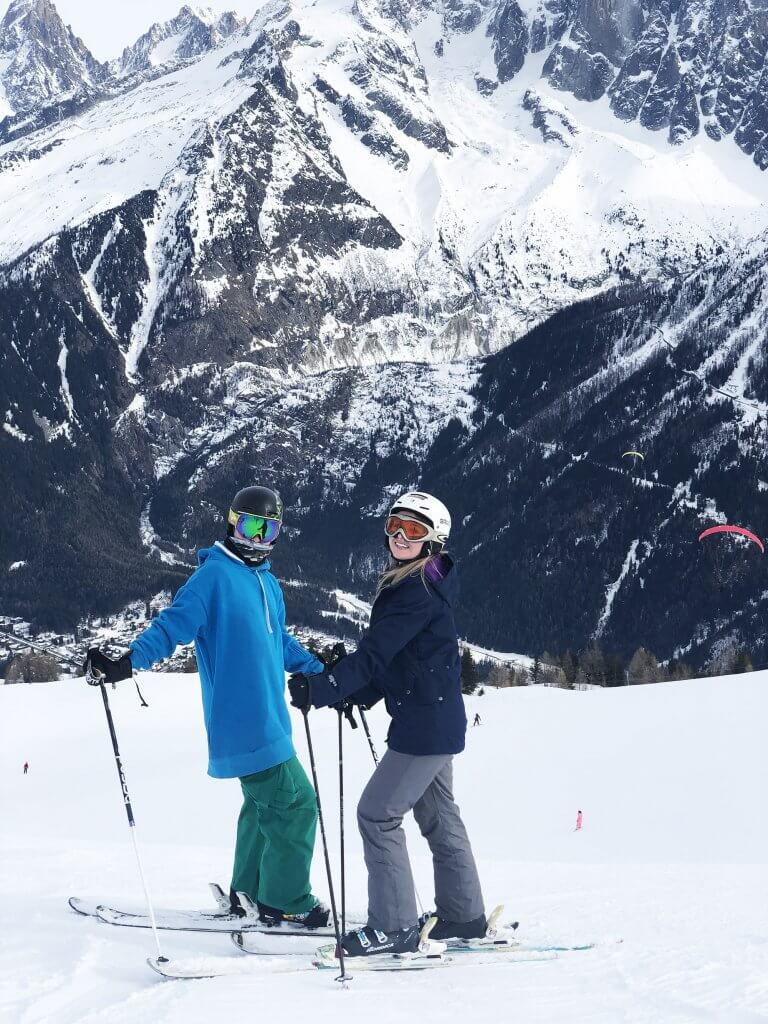 On day 4 we visited Chamonix, which is a pretty HUGE town. Therefore it’s quite a busy area for skiing, but it was still nice for my level. We went up on the La Flégère ski lift which was slightly quieter than the Brévent one, and ended up catching different cable lifts across the areas to make the most of it.

The pass for 1 day was between 50 – 55EUR (due to it being quite a popular, expensive area!), and has lots of ‘cat-track’ style Blue runs to try out. Of the three areas we visited, it was probably my least favourite because of this, the expense, and the busy-ness. 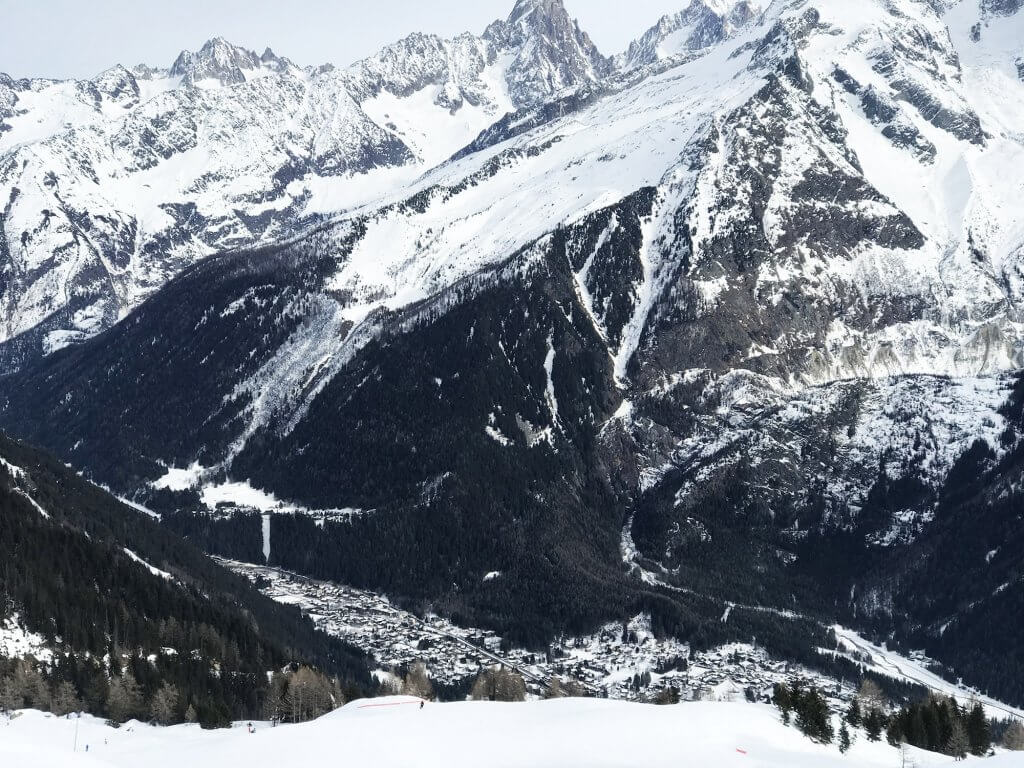 We didn’t end up eating out in Chamonix, but I had a recommendation from a couple of people on Instagram to check out Poco Loco if you love burgers! 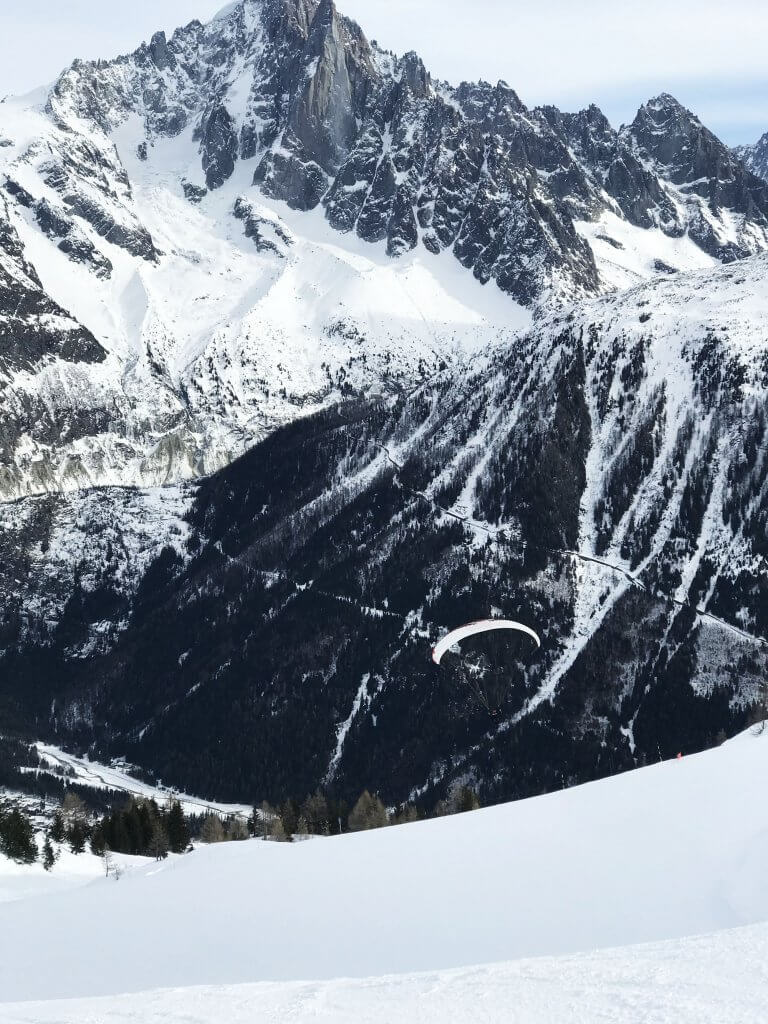 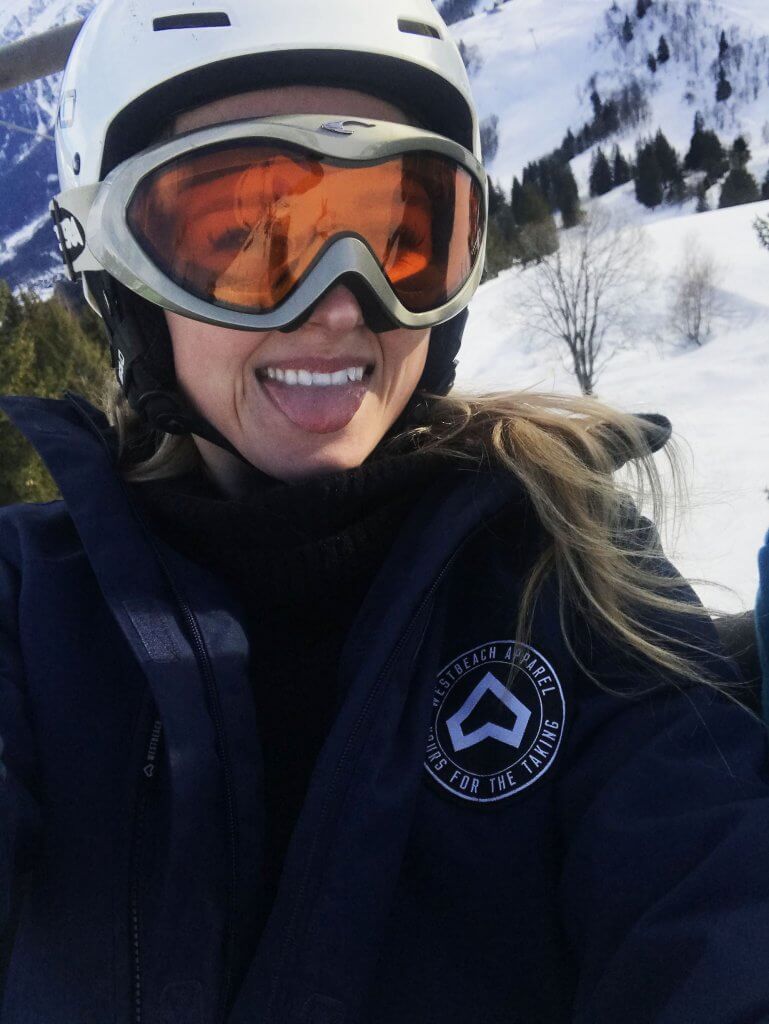 We visited this area on two days; the first time was when I was uber tired and ended up having a very anxious day (mid-slope breakdown included) so didn’t enjoy it that much BUT the second time we went I really enjoyed it.

The ski pass was around 50EUR for 1 day, and there are loads of Green slopes in Megève, so ideal for anyone wanting a relaxed ski day (Alex’s parents loved it). I found the Blues quite challenging in this area, but it was still lots of fun. 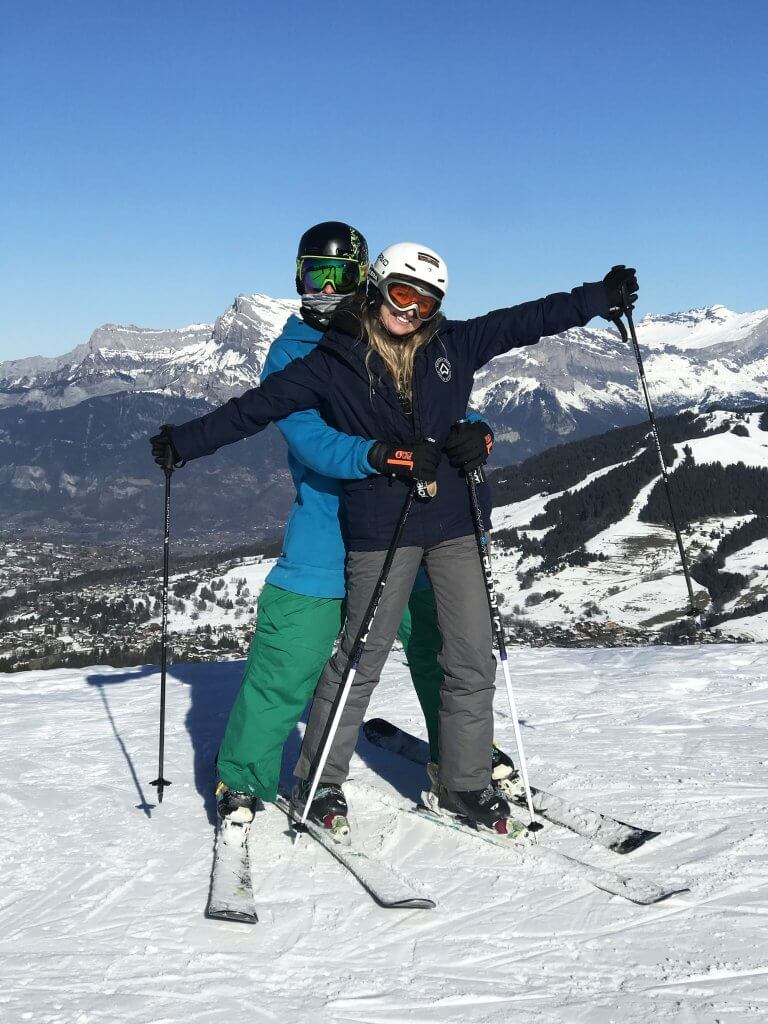 Both times we went up to Megève, we stopped for lunch at Le Club du Mont d’Arbois. The restaurant itself has a slightly confusing self-serve system and pretty slow wait-staff (who refuse to serve you at the bar and insist on waiting your table for drinks, but then take forever to come to your table…) BUT if you’re having pizza and/or fries, it’s worth the wait!

They have a wood-fired oven outside making some of the tastiest pizzas, and THE FRITES – omg. We all agreed they were the best chips/fries/frites we’d all ever eaten – so yummy 🤪 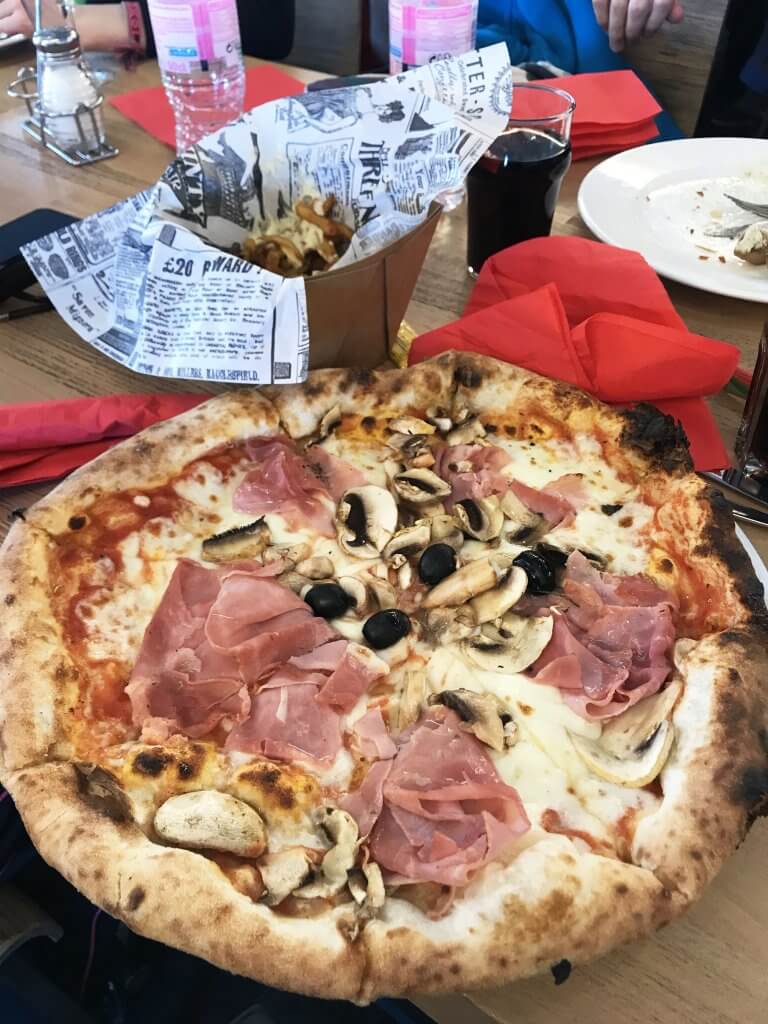 We were super lucky with the weather during our trip; we had wall-to-wall sunshine for all 6 days. This made for beautiful photos and lovely visibility, but it made the actual skiing a little more tricky. With less snow cover a few slopes were closed or had very thin snow cover (challenging!) and we had a LOT of ice. Despite that I’m so proud of how I’ve progressed and can’t wait for next year now! 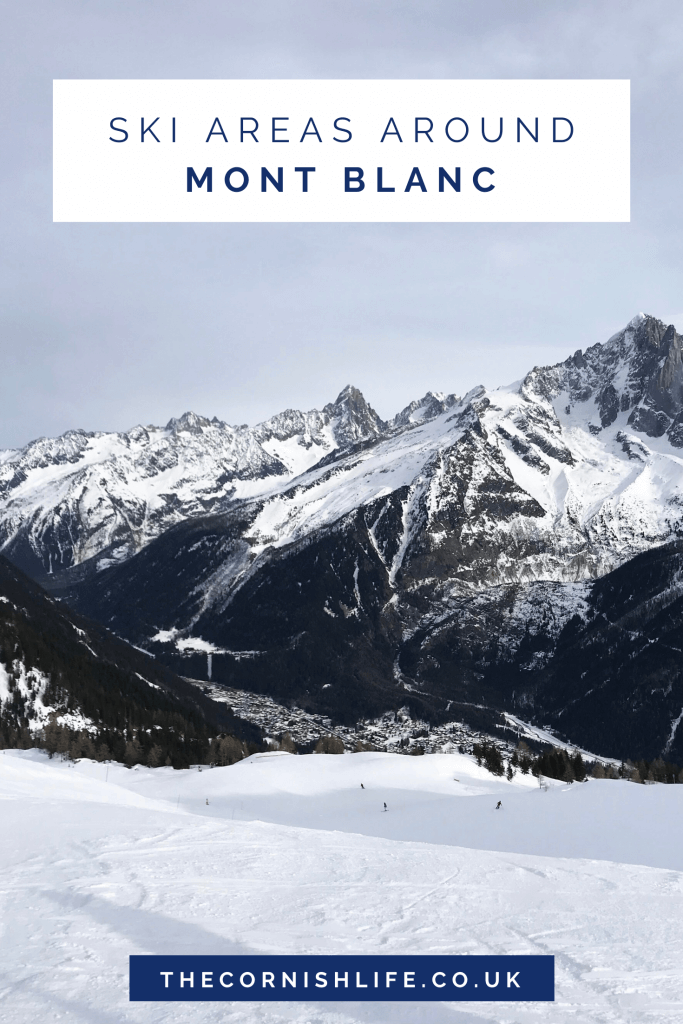 Where are your favourite places to ski in the Alps?