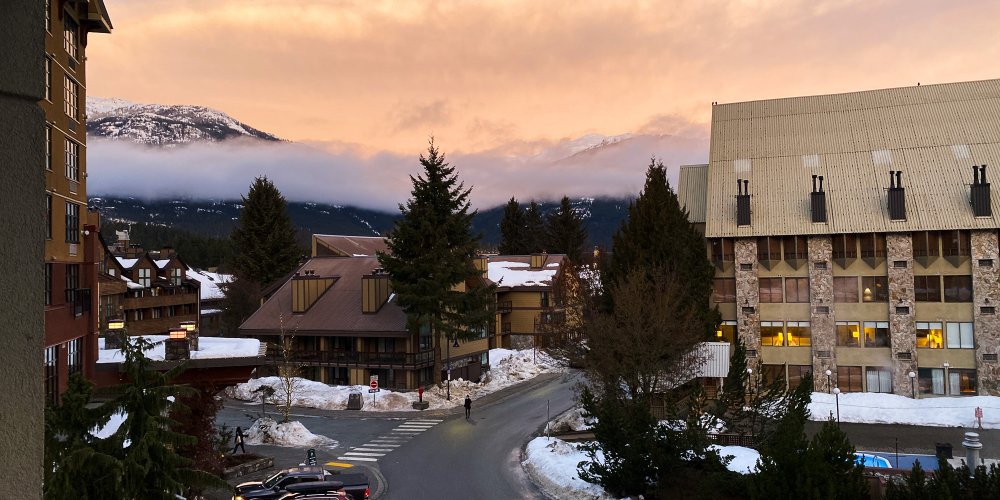 We’ve just returned from an amazing ski trip to Whistler, BC. It was our first time visiting and we learned a lot so I thought I’d share some tips!

Our Canada trip with myself, my partner Alex and his family included 12 days in Whistler, followed by 4 days in Vancouver before coming back home to the UK, and it was awesome.

I’d visited Canada once before when I was a child but I don’t really remember a lot of it, and while Alex has actually lived in Canada before, he’d never been to the British Columbia side of gone skiing there – so it was a first for all of us on the trip. We had some amazing experiences but also some ‘pitfalls’ (and one trip to hospital… but that’s another story!), so I thought it might be helpful to share some of the tips and things that we learned.

1. Budget for Whistler being expensive

The Whistler resort is one of the top skiing destinations in the world, with two mountains (Whistler and Blackcomb) to explore. Therefore as you might expect, everything is pretty pricey! Ski passes alone were over $800CAD (see more on these below), and hotels and food were central London style prices.

I should mention that, as with anywhere, it’s definitely possible to save money and do things on more of a budget than we did. I saved for at least 18 months to save for it, and am incredibly grateful to Alex’s family for organising and subsidising us on accommodation & flights as well! But we did splurge on food and things while we were there, which definitely isn’t necessary.

If you’re not used to travelling in Canada and the US, remember as well that all the prices are EXCLUSIVE of tax! So in BC you have to add 12% to any price you see written down. It’s ridiculous and if someone could explain to me why on Earth they do they that would be great 😂.

Also the typical etiquette for tipping is between 15 – 20%, so good luck if you’re a stingy Brit like me!

3. Epic Passes might save you money (but buy early!)

Rather than buying daily lift passes (around $160CAD a day!), depending on how long you’re skiing for buying an Epic Pass (ie. a season pass) could save you money. I believe they were around $800 – $900CAD this year, so certainly if you’re going for over 7 days this could be a good option – but you need to be prepared and buy these early! They usually stop selling them in early December.

The great thing about Epic Pass is it gives you unlimited access to both mountains (Whistler and Blackcomb) AND gives you 20% off certain ski hire places and some restaurants too.

4. Could you save money on ski hire?

I don’t personally have my own skis so for the last few years I’ve been hiring skis instead, but this trip made me reconsider! Hiring skis in Whistler was much more expensive than when I’ve hired in Europe previously. It cost over $700CAD for 10 days, even with my 20% Epic Pass discount!

I genuinely could buy a pair of decent skis for that money, and while I know there are other expenses that come with owning your own skis (you have to buy ski bags, and pay to add them to your flight, and maintain them etc.), it almost seems worth it for that money. One person even suggested that it would be a smart idea to buy a set of skis while you’re in Canada, and sell them again before you leave!

There must be a market or forum or at least a Facebook Group of people doing this somewhere… so I just thought I’d share in case you want to save some cash!

^ My pink jacket is from Dope Snow

5. Avoid weekends if you can

We were there for 12 days and happily missed out the weekends (once due to having to quarantine – more info below – and once due to weather), but we could see from our hotel window that the lift queues were INSANE, even super early. All the people we spoke to said it always gets manic at the weekends due to locals coming up from Vancouver, but during the week it was fine.

Most of the slopes are really big and wide anyway, so I suppose it’s only an issue if you really hate queues (or ‘lines’ as they call them)!

6. Slope colours are slightly different than in Europe

I’m a very nervous skier (this was my 4th trip and while I’ve definitely gained some confidence I’m still on the cautious side!) and I found the Whistler slopes quite challenging in comparison to ones we’ve done in the Alps.

In Europe you get Green slopes (easy/beginner), Blue slopes (easyish/intermediate – a mixture between Green & Red), Red slopes (intermediate/challenging – a mixture of Blue and Black), and Black slopes (advanced, aka ‘shit scary’ in my own words!). However in Canada they don’t have Red slopes, and instead have Black, Black Diamond, and Black Double Diamond.

No idea how it works once you get to Blacks as I try to stay 100 miles from those! Although Alex and Sam insisted that they tried a regular Black that I would have been fine on…

Anyway I’m not saying this is good or bad, but it’s just different to what we were used to! 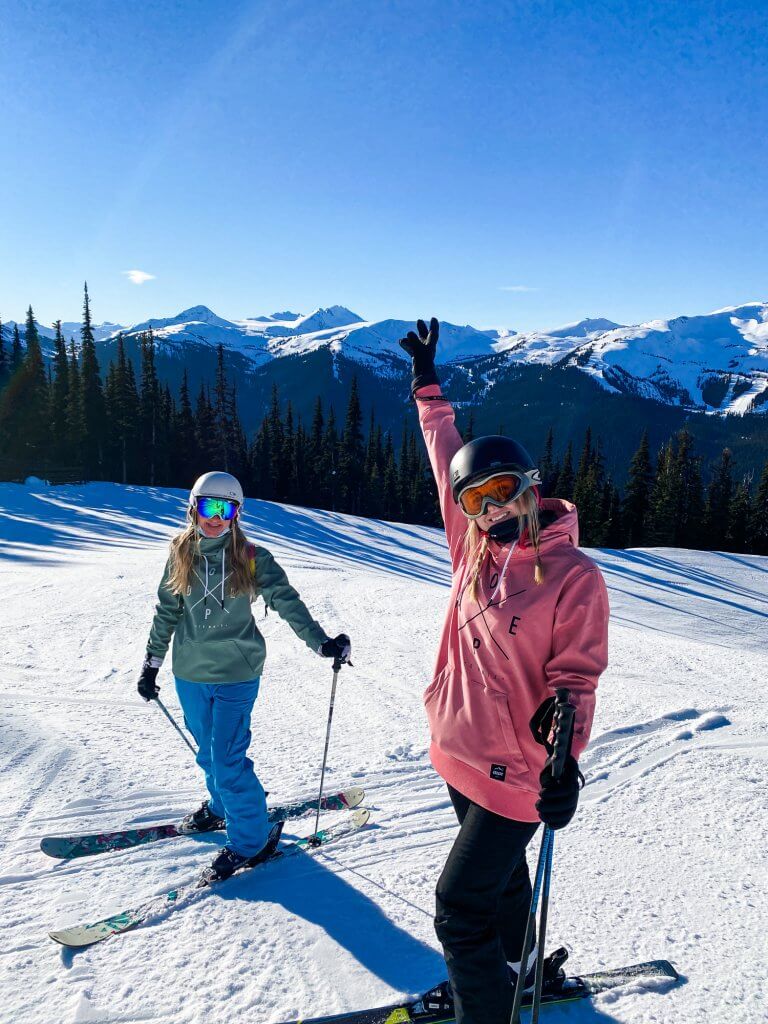 ^ Both jackets from Dope Snow

The Blackcomb Ice Cave can be found by going up to Blackcomb Glacier via the Glacier Express chairlift and Showcase T-Bar (I had never been on a T-Bar before this was a challenge 🙈). Once you’re at the top of the T-Bar, you have to hike up a bit of mountain to the right until you see the glacier bowl laid out in front of you. You can then ski traverse across and down to the ice cave. This article has really thorough directions if you need more detail!

I must admit that once I saw the glacier bowl, I chickened out and ski-ed back down the mountain while Alex and Sam went to the ice cave! It is technically a Blue slope (with an optional steeper bit that’s Black) but it was so mogul-y and had this tiny edge cut out that you had to traverse down and I just didn’t feel comfortable doing it. Afterwards Alex and Sam confirmed that while I could have done it, I would have hated every minute of it LOL.

Anyway they went ahead and found the cave and took some beautiful photos – it does look very cool so if you’re a more confident skier than me definitely check it out. 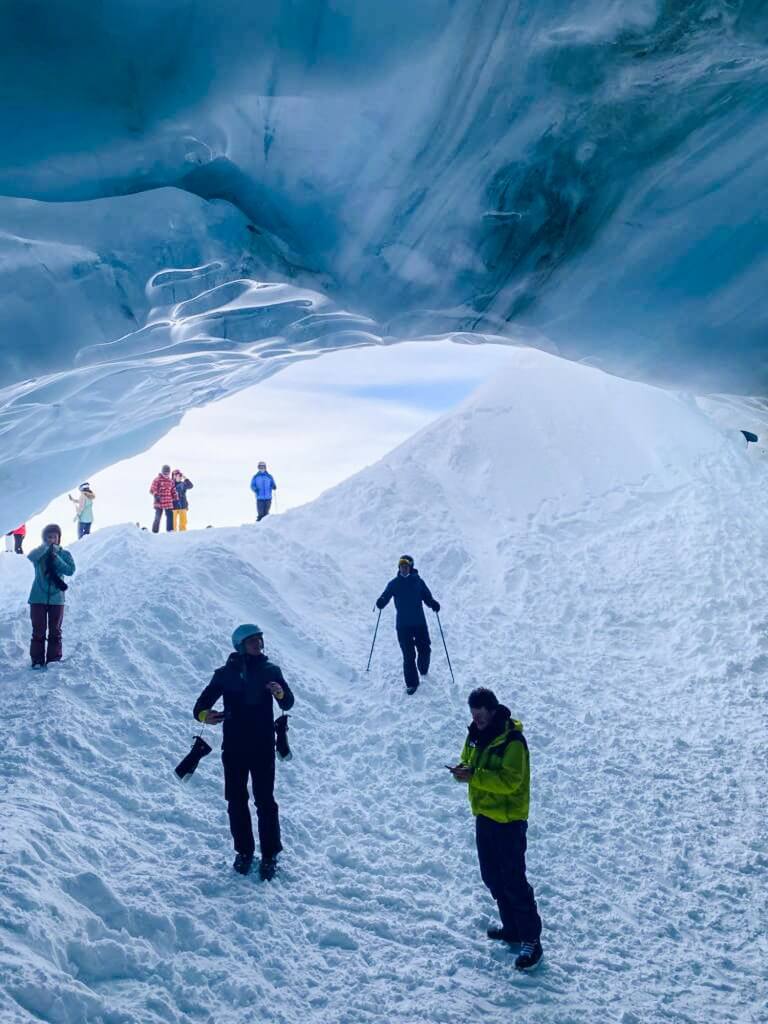 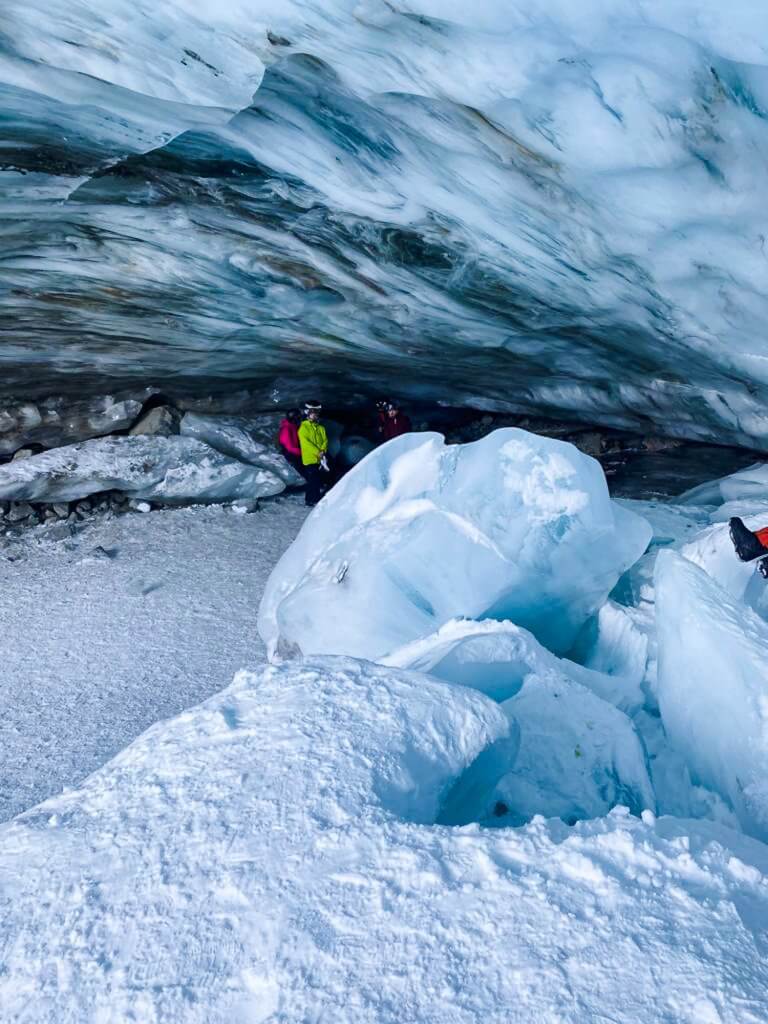 These were my two favourite slopes/trails – both Green and both nice and easy. ‘Burnt Stew’ is on Whistler mountain and takes you into the Symphony Bowl which is fun and beautiful, and then around the edge of the mountain with trees.

Meanwhile ‘Sunset Boulevard’ is an easy cat-track (not too steep and plenty wide!) that winds through the forest and just feels like a proper skiing movie!

(Note: Alex and Sam snowboarded for a couple of days and while they’re both probably intermediate level boarders, they said Sunset Boulevard was NIGHTMARE on a snowboard… so avoid unless you’re on skis!). 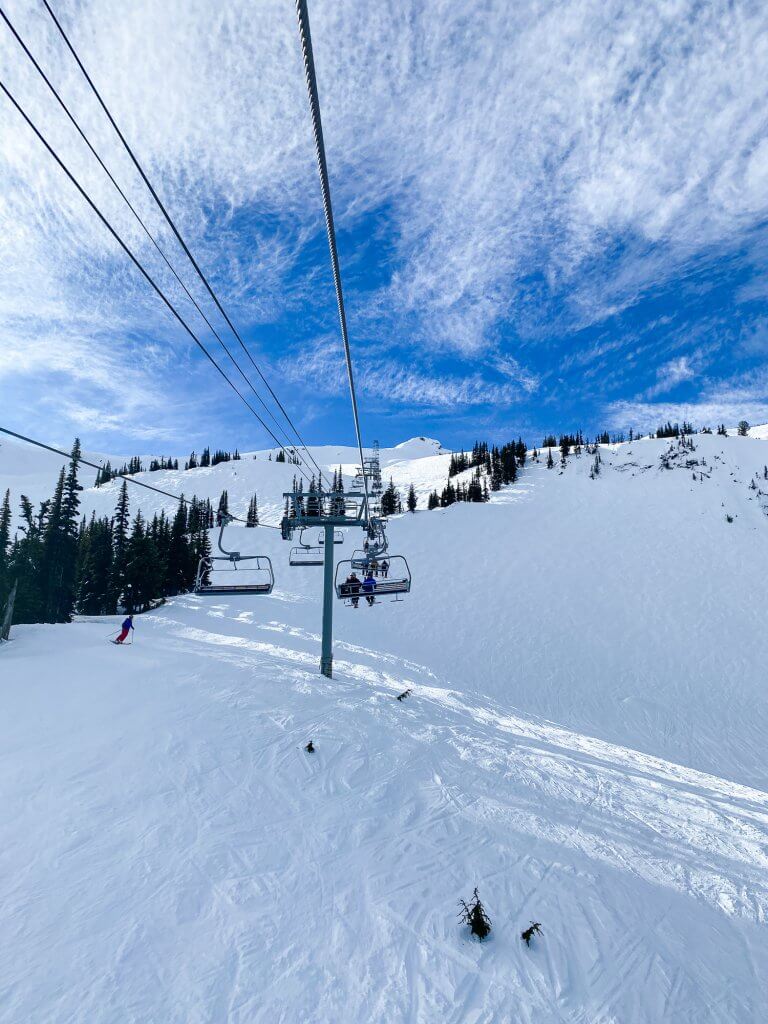 9. Book restaurants (and even bars!) in advance

We knew Whistler was a popular destination, but never imagined how busy the restaurants and bars would be. Some places needed you to book weeks in advance, and even the mountain cafeterias required you to book a time slot on the morning! However it was difficult to know what was standard procedure for Whistler and what was just in place because of COVID19 restrictions… 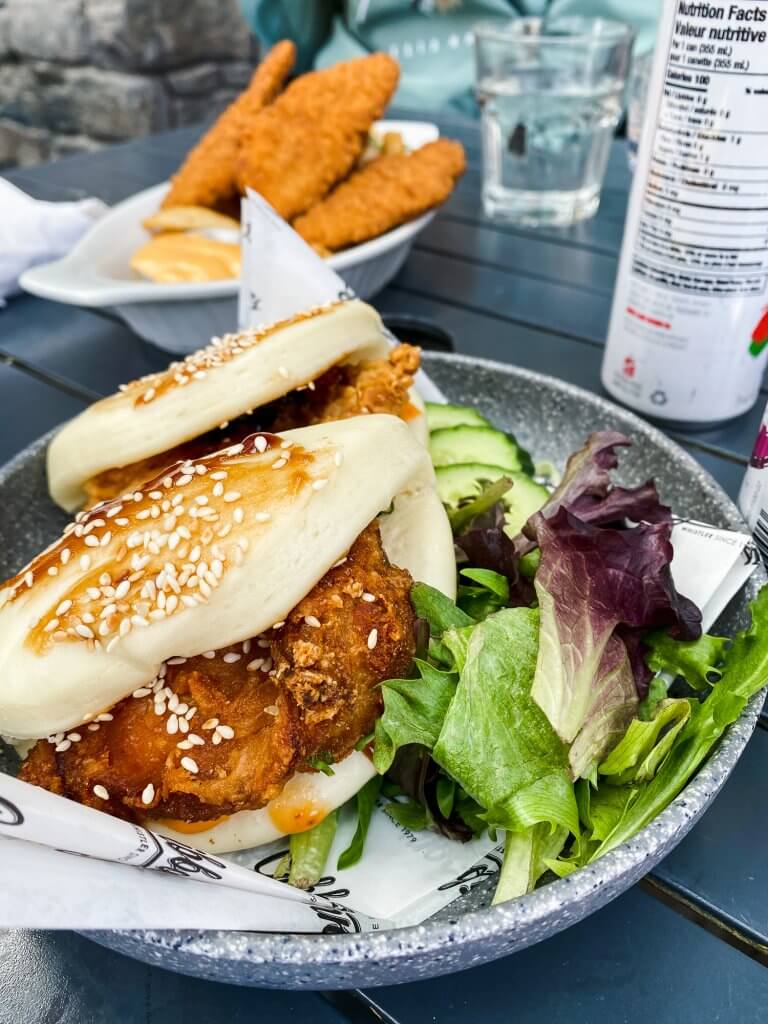 There’s a really beautiful walk along the river around Whistler Village, which is well worth a relaxed stroll after your skiing session, especially if it’s snowing! 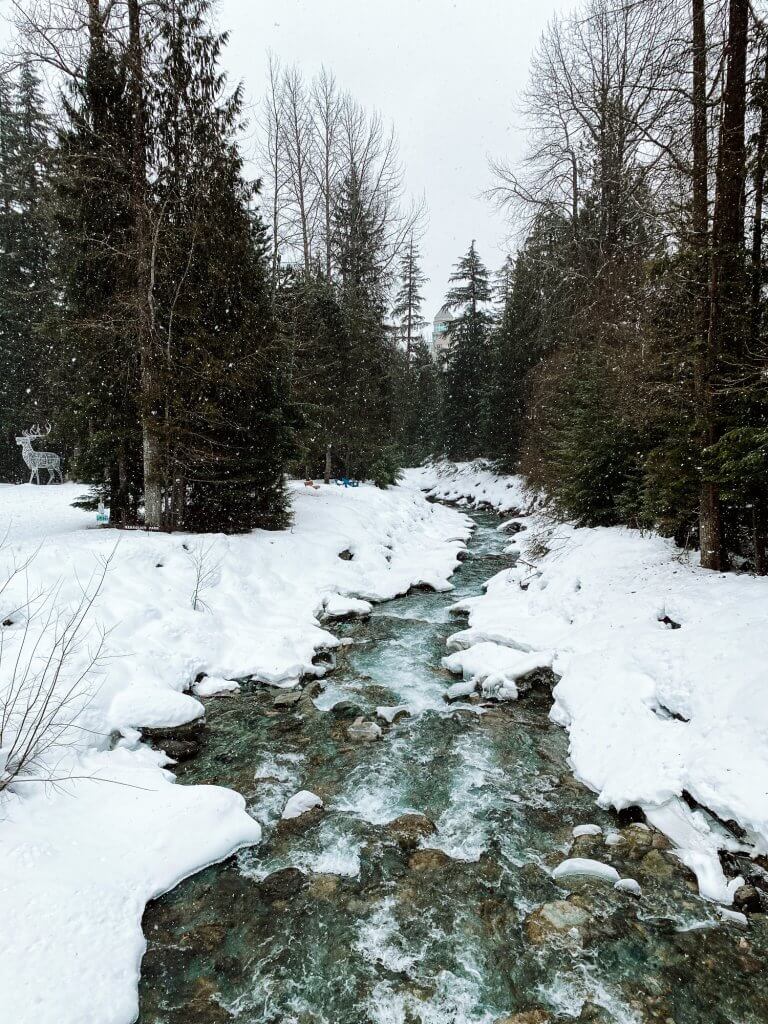 11. If you’re travelling Route 99 between Vancouver and Whistler, stop and enjoy the scenery

Route 99 is known as the ‘Sea To Sky Highway’ and there are loads of great places to stop and explore along the route. This is a great blog post with details on where the best places to stop are, but if you only have time for a quick one, make it Shannon Falls – it’s just off the highway and really stunning!

Getting into Canada in the first place require a lot of jumping through hoops, but one thing that not many people realise is at the moment (time of writing is 10th Feb 22) the airports are doing PCR tests on all foreign passengers upon arrival – REGARDLESS of whether you are fully vaccinated, or already had a negative PCR test done before you left the UK. This means that you then have to quarantine at your accommodation until you receive your negative test result via email – which for us was just over 24hours but it can take up to 2-3 days.

Once you’re in Canada (or at least in BC), you need to show your ‘vaccine passport’ (the NHS one is fine if you’re from UK) proving you’ve had your COVID19 vaccine, AND a valid form of photographic government ID whenever you go into any cafe, bar, restaurant or hotel. I’m not sure why but clearly they’ve had issues with people faking them!

We got caught out on this to start with as we weren’t carrying our passports with us, but they are SUPER strict on this right now. Apparently lots of places have been having investigations and getting fined for not checking.

Anyway, most places accepted a UK driving license as ID, although one place told us we were supposed to show passports and driving licenses weren’t valid – so who knows! A credit/debit card with your name on, or any other kind of photo ID did NOT work. So be prepared!

Then if you want to go into a bar or buy alcohol specifically, you need not one but TWO forms of ID! One has to be your government ID as mentioned, and it was seemingly okay for the other to be a credit/debit card or something. I have no idea why but whatever you do, don’t moan at them because all the locals are clearly fed up with it too, and there were even protests in the capitol when we were there to do with this.

Currently you MUST wear a face mask everywhere indoors, on public transport and taxis, plus on all the ski lifts. They’re much stricter than the UK with this, and I’m not sure if exemptions work…

Other than that as I say you really do have to book everything in advance – even some bars were taking bookings. And while bars & clubs are open, you’re not allowed to mix tables, and no dancing allowed 😞. 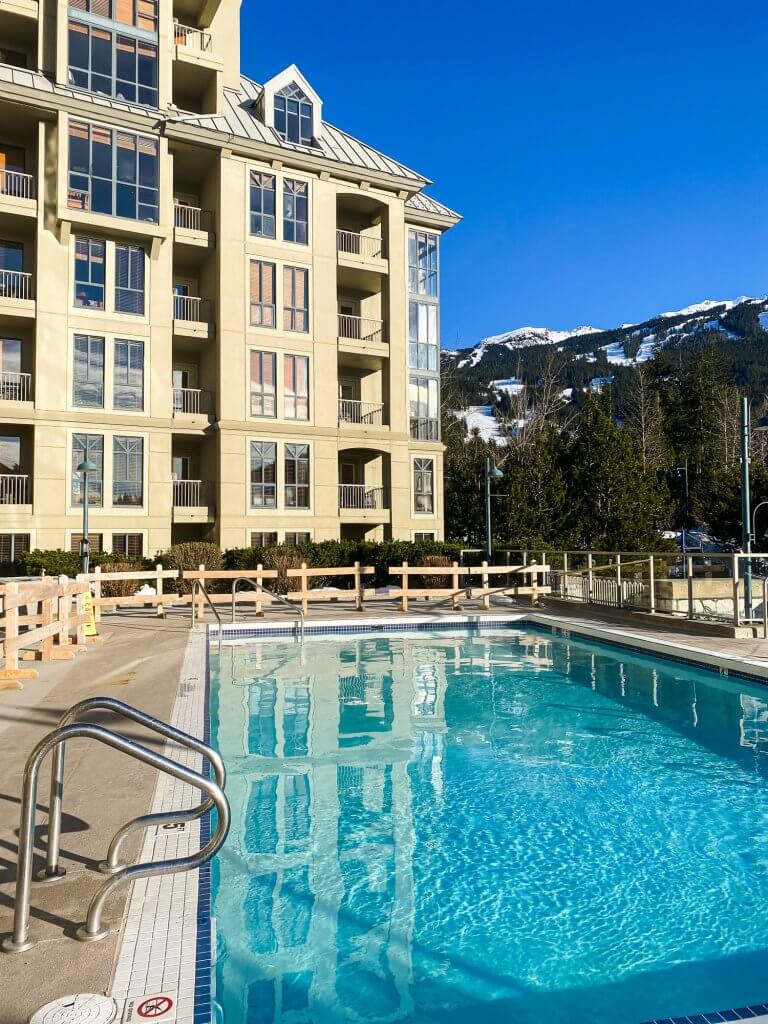 Anyway, enough with the negativity – let’s talk about food 😍😛!

I should first mention that we stayed in a hotel in Whistler Village, so most of these recommendations are based there. There’s also an area called Whistler Creekside but the buses weren’t running (they were on strike!) while we were there so we weren’t able to visit. We did end up trying LOADS in Whistler Village but below were my top picks: 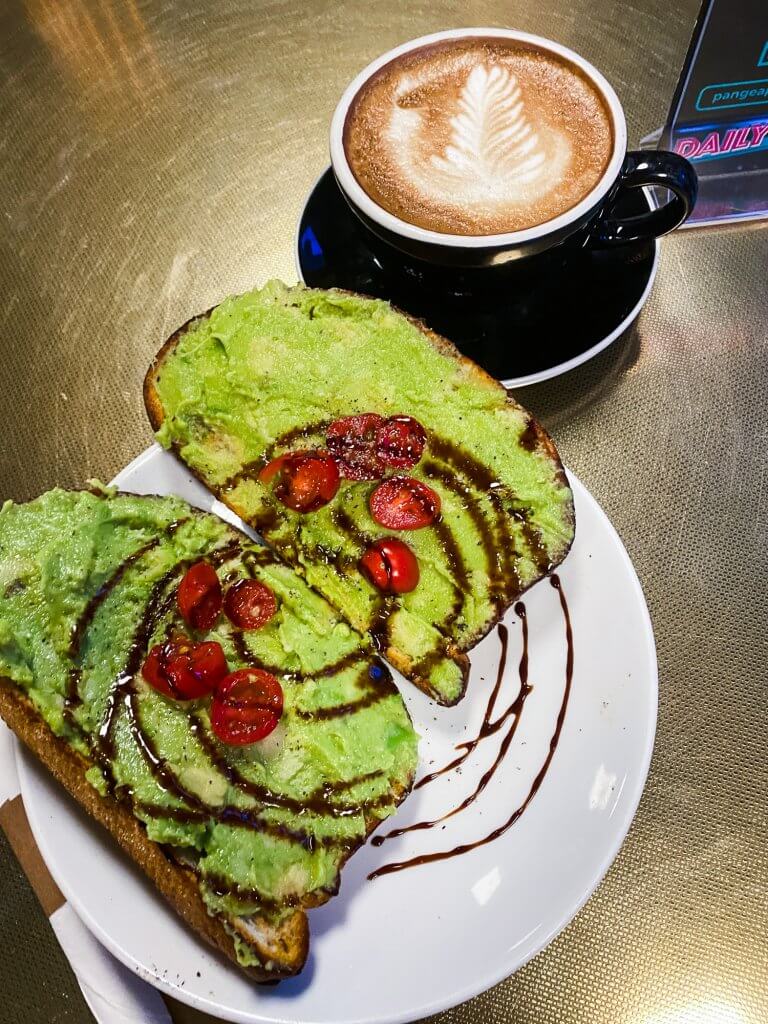 If you’ve ever been to Whistler and have some tips, leave a comment below! 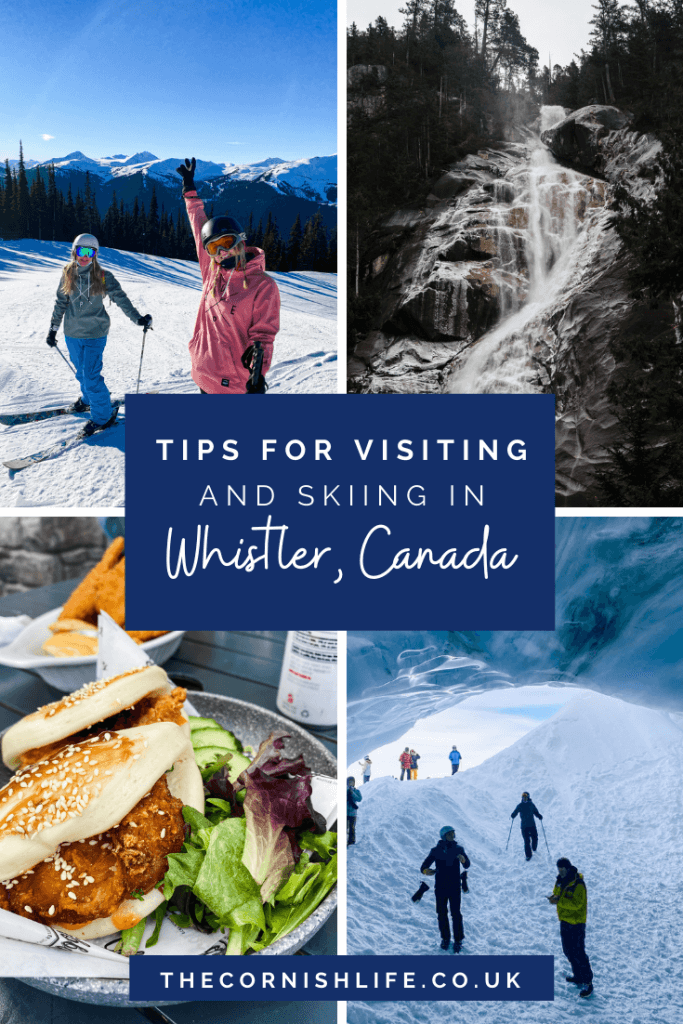 16 Best Things To Do in Vancouver, Canada 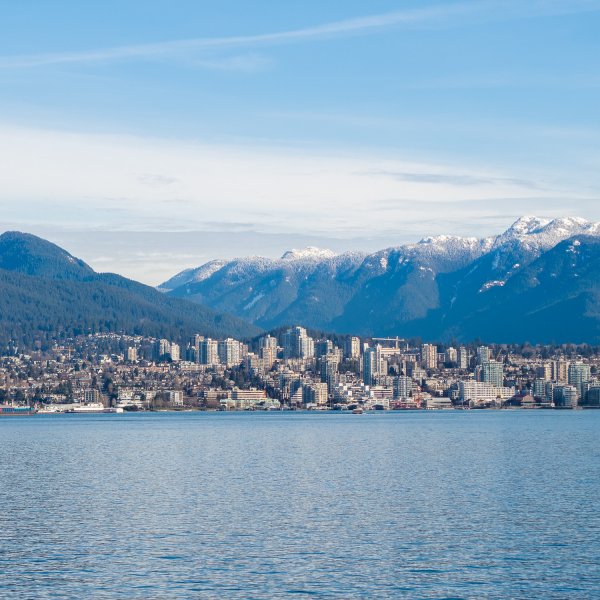