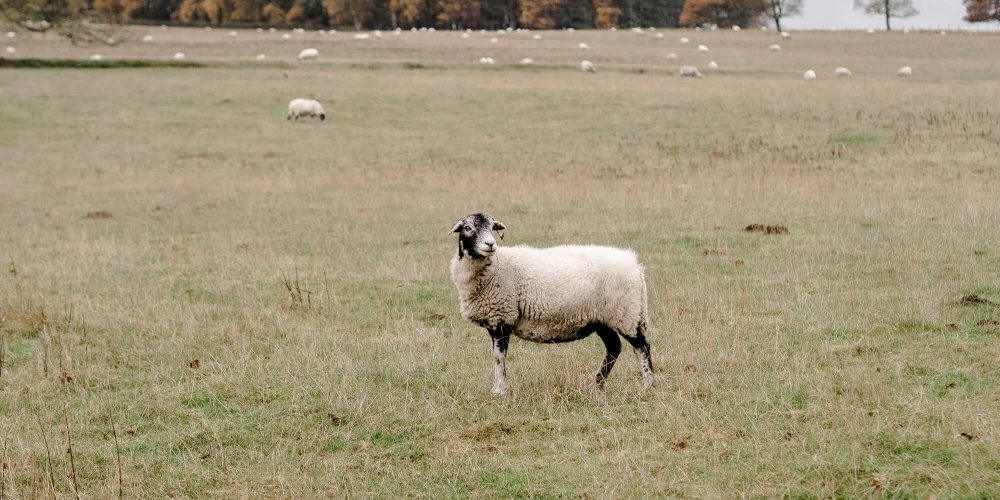 Our three night trip to York was lovely – it’s such a gem of a city!

We recently travelled up to York (after our night at the amazing Big Cat Sanctuary in Kent) to see my sister who is in her second year of university there. It’s the first time I’ve been up since she moved there, mainly because it’s a shockingly long drive up from the south of Cornwall!

If you did it in one sitting (without a night’s layover) it would take 8 or 9 hours – it’s pretty much the other end of the country! Nevertheless, we finally made it up there, and I was delighted by how beautiful this little city is.

Back in March, we attempted to make the journey up to York but ended up snowed in with the dogs in an Airbnb on Dartmoor instead! We never made it up, but had booked this sweet little Airbnb just outside York that would have accommodated us and the dogs; the owner was very kind and understanding when we had to cancel, and if we ever visit York again and want to bring the pups with us, I’ll definitely be rebooking this one!

This time, however, we weren’t bringing the dogs (due to our stopover in Kent and our journey onwards to London and then Egypt!) so found a fantastic deal on the highly rated Churchill Hotel on booking.com. 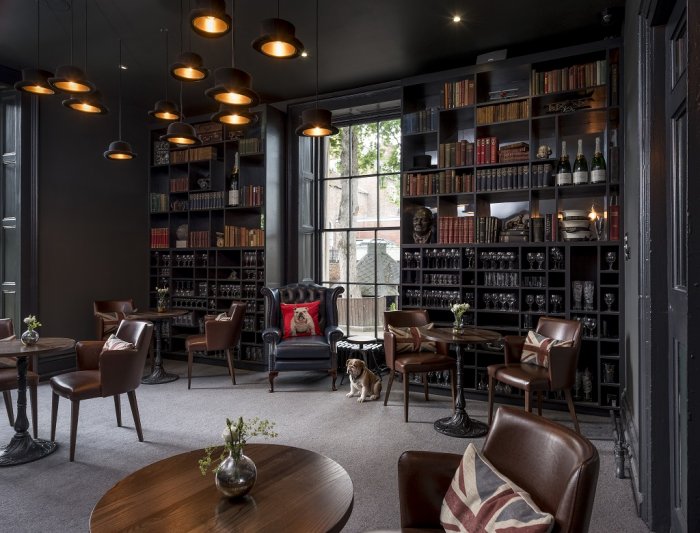 Situated very centrally, just 5 minutes walk from the Minster, The Churchill Hotel is a quirky, boutique stay with a restaurant, on-site parking and THE FASTEST WIFI EVER! This was amazing as Alex and I both needed to work during our trip. The room was beautifully decorated and we had everything we needed for a very comfortable 3 night stay, and I’d highly recommend it price-wise as well!

We only ate breakfast out on our last morning after we’d checked out of the hotel, and we had originally planned to grab something at Bill’s. However, as fate would have it, due to a power cut on their street we had to source a brunch elsewhere (and we were dangerously close to the 11:30/12pm brunch cut-off time!).

Luckily, we stumbled across Brew & Brownie; a cute little cafe & bakery offering a delicious range of breakfast and brunch options all day long! I couldn’t resist their delicious pancake stack with banana and chocolate, while Alex went for their brunch sandwich. YUM! 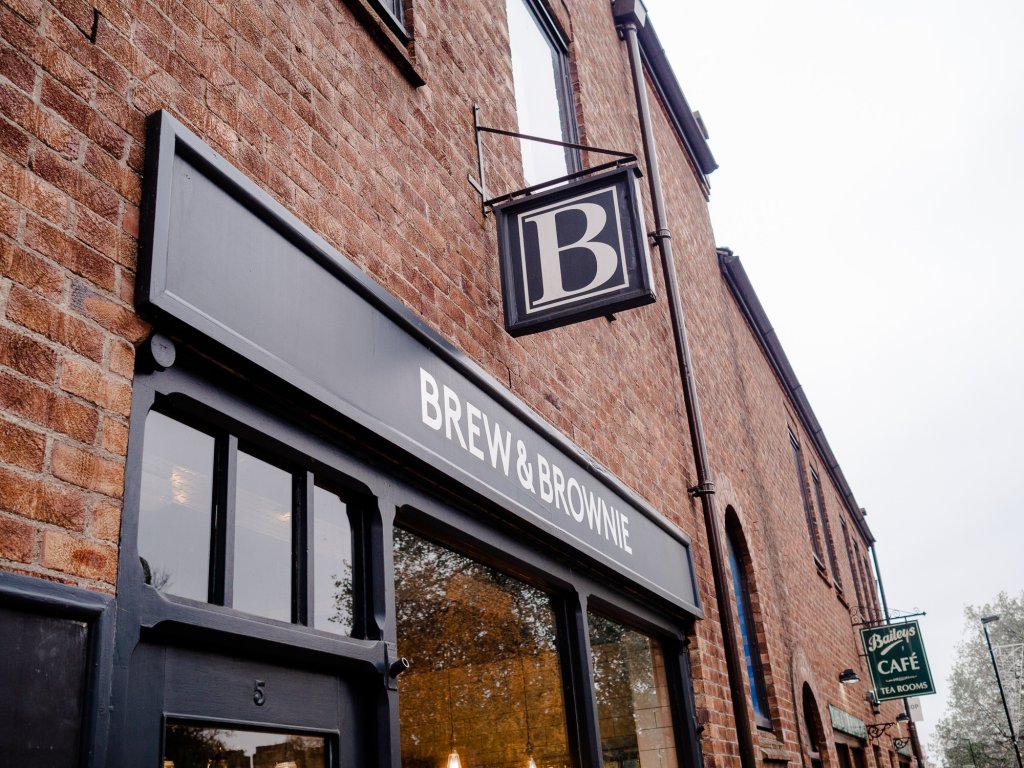 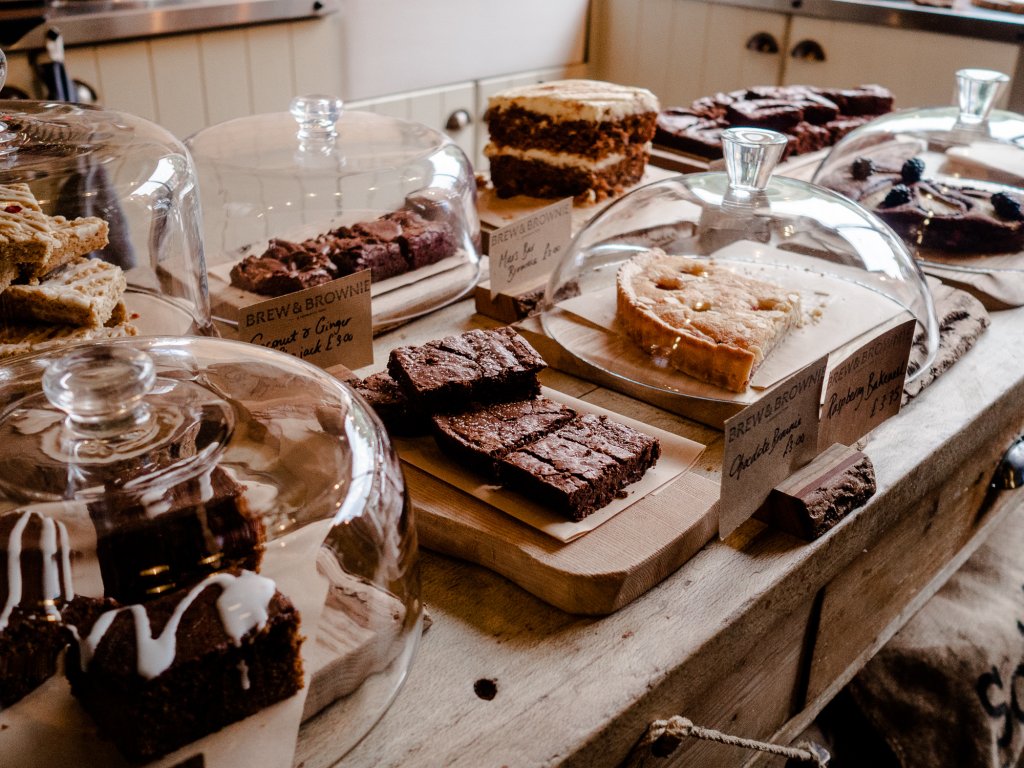 On our first day in York, we spent our time wandering around the city streets, so just wanted something quick and street-food-y to eat. Shamble Kitchen (located on, you guessed it, the famous Shambles street) provided just that, and it certainly lived up to its highly rated reputation. I went for their daily special Thai curry box and it definitely sorted me out for the afternoon! 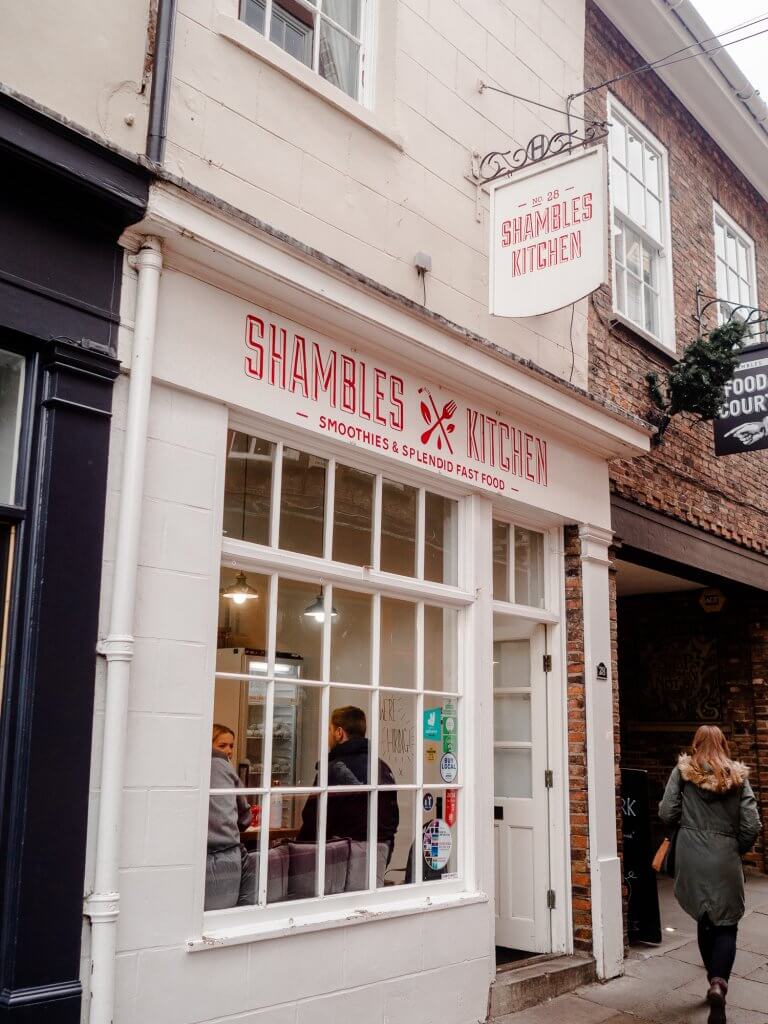 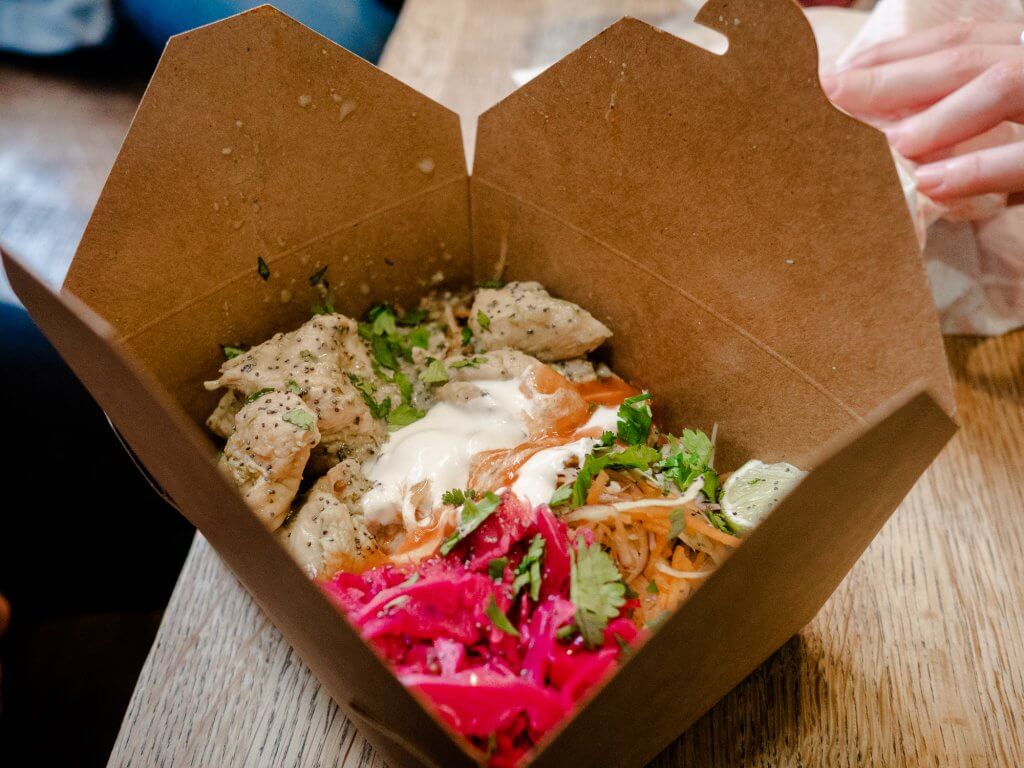 Alex and I literally can’t go anywhere without getting sushi. We are so deprived of it in Cornwall that we go a little crazy when we leave. Thanks to my sister’s regular boasting, we were both extremely excited to try out York’s Sushi Waka (I believe there’s also a branch in Leeds as well… it is NOT the same as the Sushi Waka in London that appears in Google) and we were not disappointed!

The sushi was amazing (some of the best we’ve had!) and we ended up stuffing our faces until we were pretty much exploding out of our jeans. It was great, and would highly recommend! 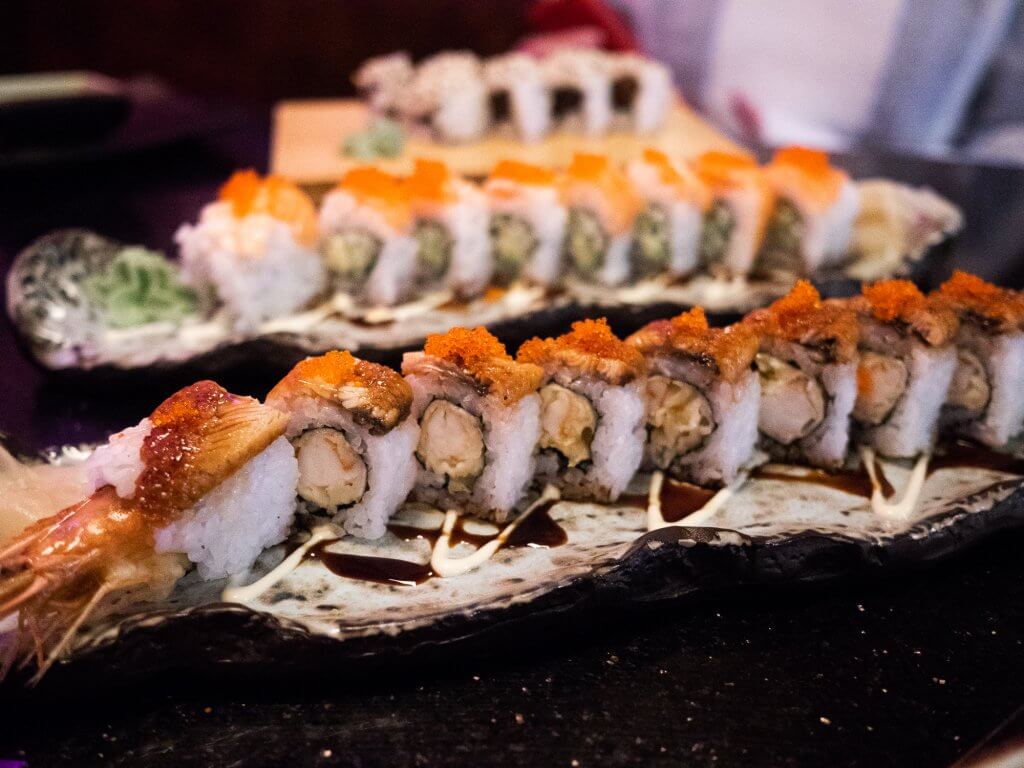 We also planned to book a table at Skosh – a quirky, small-plates style restaurant that is recommended within all the York guides and ‘top 10 lists’ but decided against it at the last minute. However I definitely plan on trying it if we head there again.

As our hotel was pretty much directly opposite the entrance to the museum gardens, we couldn’t NOT have a meander through the ruins. My sister imparted some of her city knowledge on us about how King Henry VIII had torn down the Abbey that had previously stood there, deliberately leaving a few columns and arches here and there to show the size of what had been there and to prove how powerful he was.

She also showed us this stone mural (pictured below but this is just one tiny segment of it!), which depicted a geological map of the North of England, using different stones that correlated with the type of geology found in that particular area – pretty creative! 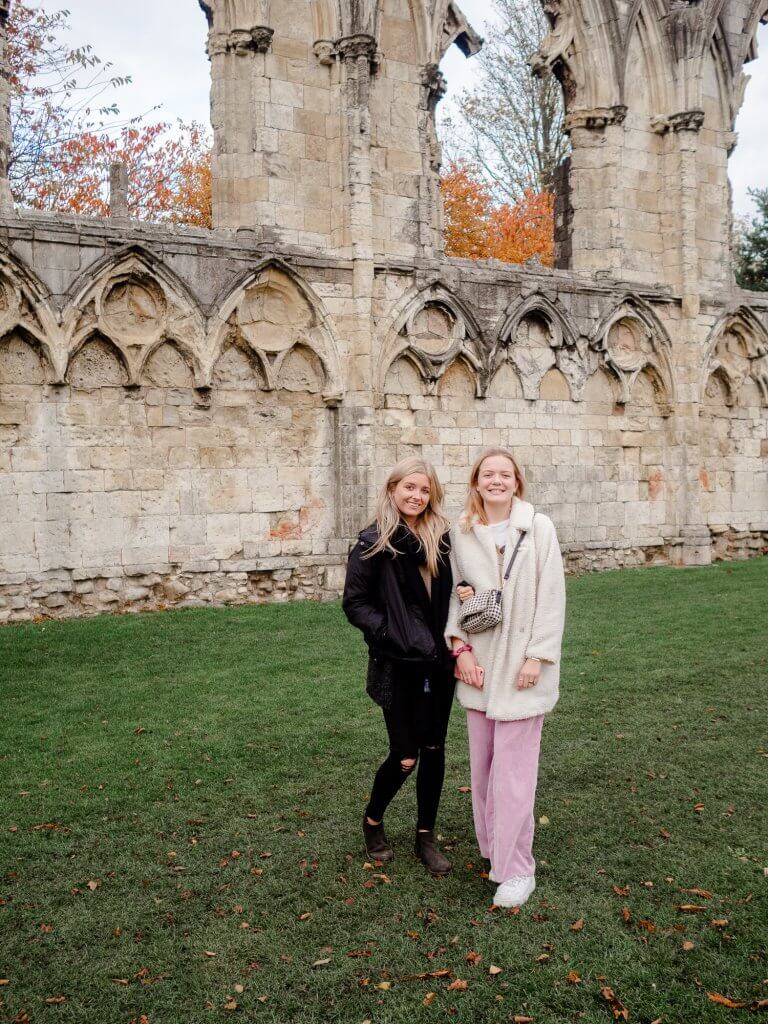 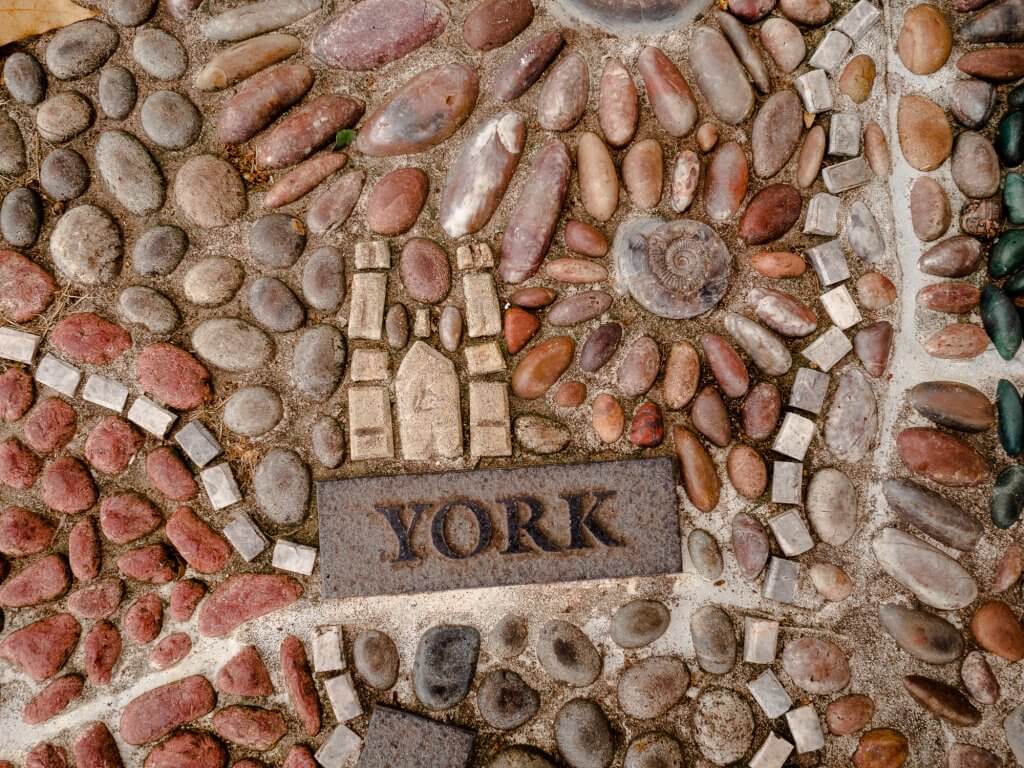 Being a city full of Medieval and Tudor architecture, York commands a somewhat spooky atmosphere come nightfall, and is well known for its gory past throughout history. Therefore I thought it would be a good laugh to join in one of the city’s famous ‘Ghost Tours’ on our first evening!

There are LOADS to choose from, ranging from £5 per adult, to £30~ per adult, depending on whether you want a walking tour, or a bus tour, and how in depth you’re looking for. We just wanted something lighthearted and fun to do, so we chose to join the Original Ghost Walk of York which costs £5 and lasts about an hour and a half. It leaves from the same place every evening, and a storyteller takes the group (there were about 20-30 people on our tour that night, but I’m sure some nights must get many more as it seemed very popular) around the city centre on foot, stopping occasionally to tell us a gruesome tale of ghosts and spooks!

York’s impressive gothic cathedral is the largest of its kind in Northern Europe (yes, including Notre Dame!). As you walk around it from the outside, it’s amazing how around each corner, it just seems to keep on growing and spreading out before you!

You can go inside to tour the incredible internal architecture, but we chose not to as it was quite expensive. My sister can go inside and visit for free as she’s a student, but for us it would have cost £11 per adult, which I felt was a lot (consider that none of us are religious at all, so it may be worth that to someone who is or if you’re very interested in the architecture & history side of things!). 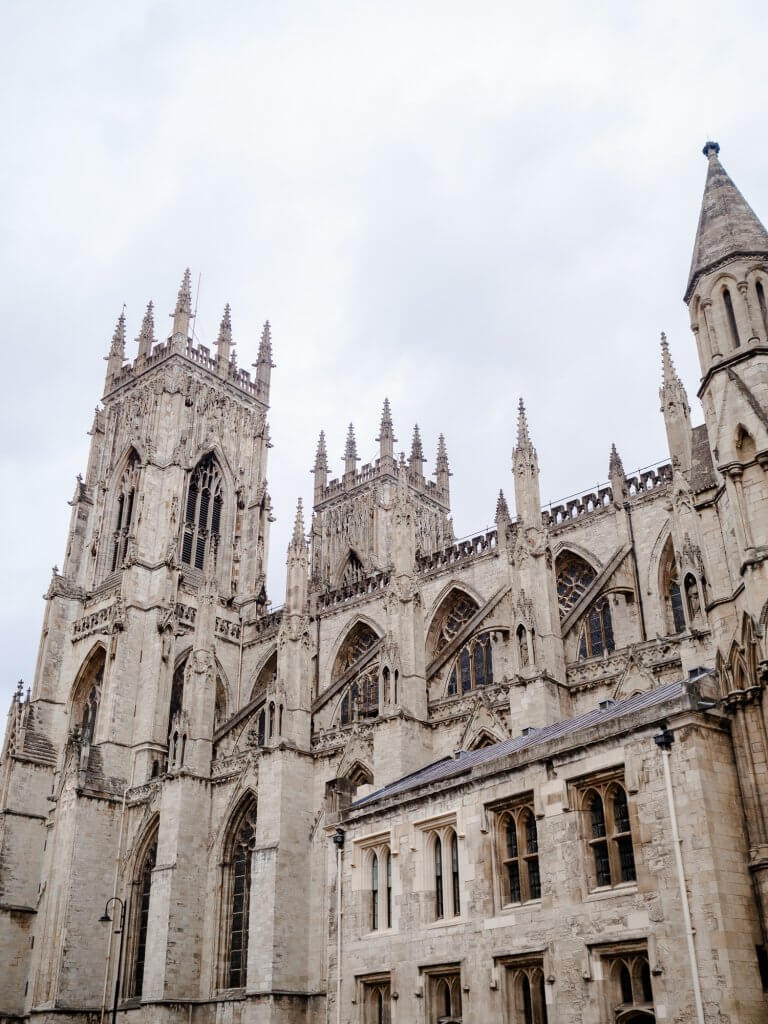 I’d read online about how The Shambles (a particularly quaint, Tudor-style street in centre of town) is a must-see when visiting York, but I hadn’t realised why. This little cobbled British street was used as the set for Diagon Alley in the Harry Potter movies!

It was exciting to walk through and visit some of the inevitable Harry Potter merchandise shops, including an ‘Olivanders Wands’ replication and a ‘potions’ shop with cauldrons of oils and liquors. 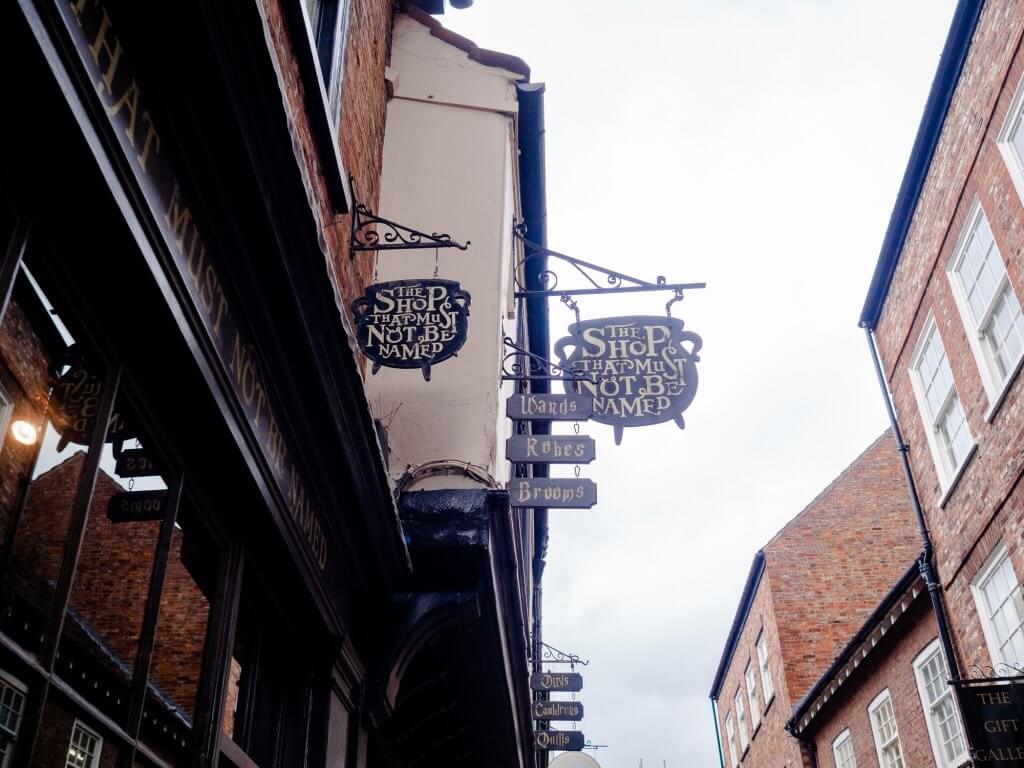 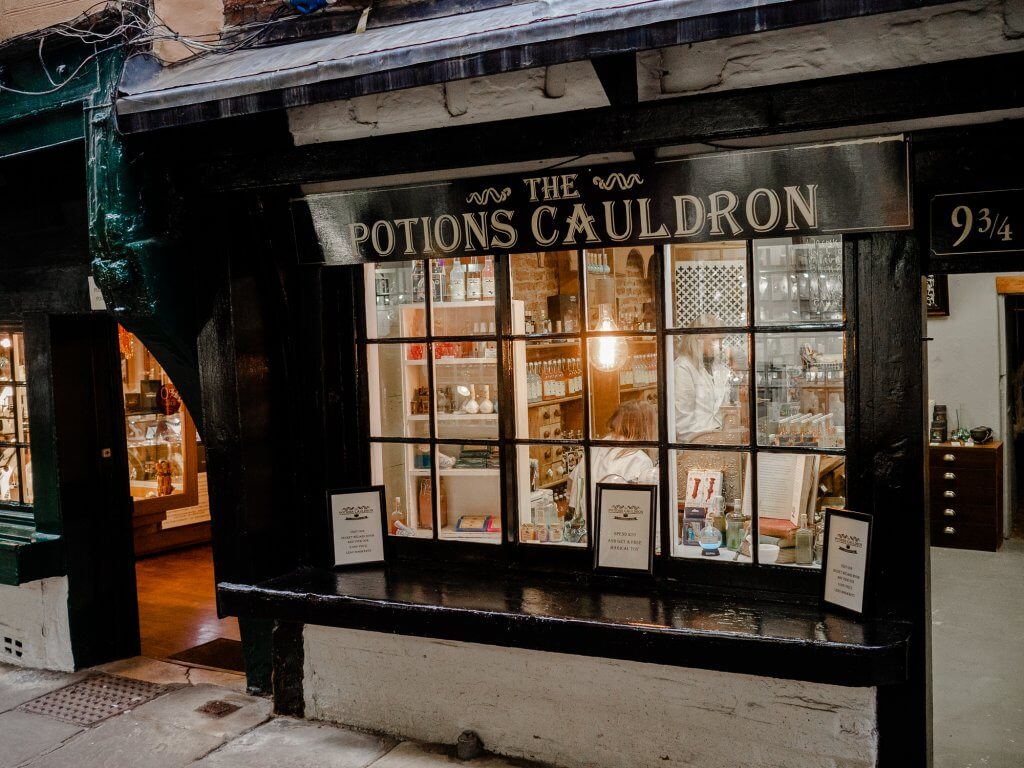 Apparently it’s not very rainy in York (according to my sister, who has grown up in rainy Cornwall, FYI!) and in fact has been uncharacteristically dry over the last couple of months EXCEPT for the days that Alex and I were visiting…. A classic case of bringing the Cornish weather with us.

The rainstorm that hit during the afternoon of our tour of York with my sister was unbearable; we tried to push through to visit the city walls, but the streets were flooding and it felt like a monsoon had just hit, so we decided to seek shelter instead.

Betty’s is a well known luxurious afternoon tea spot in York and other North England towns, and appears to be infinitely popular. No matter the time of day, this place was bursting full. I would have liked to have experienced it, but maybe next time.

Instead, we headed to York’s ‘The Ivy’ – one of a chain of art deco luxury restaurant-bars throughout the UK – who offer a good range of tasty afternoon tea options too. I settled with a peach cocktail, while Alex went for a cream tea and my sister went for their espresso chocolate cake. Obviously I had a taste and OH MY … it may just be the best slice of chocolate cake I’ve had in my life! 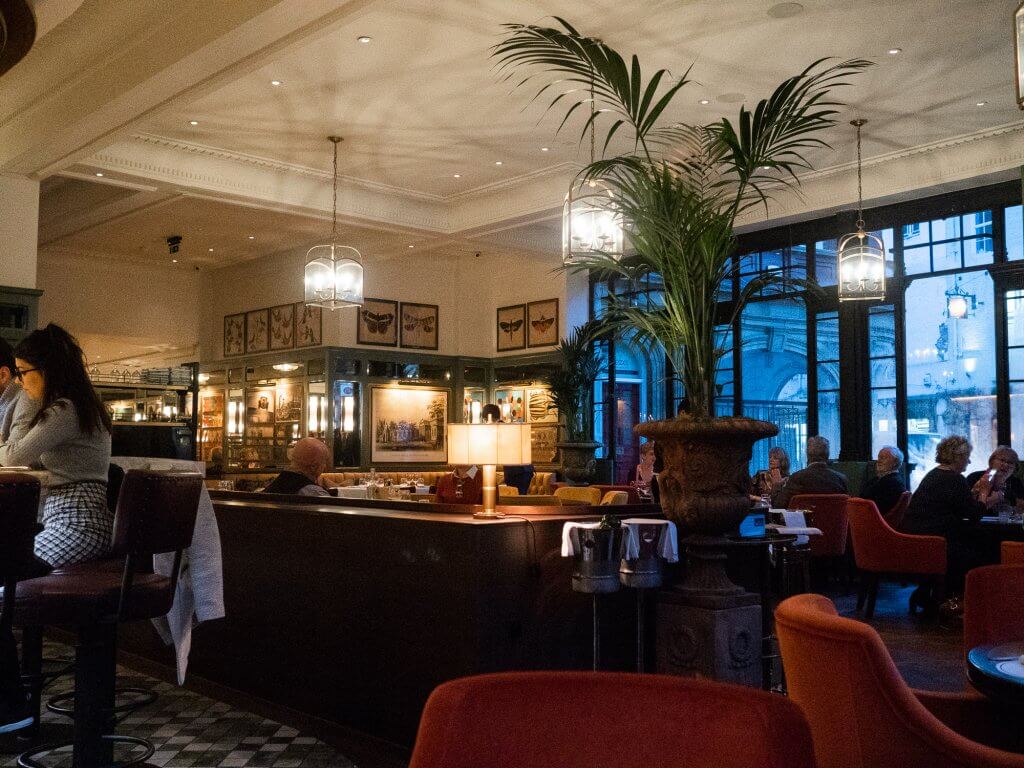 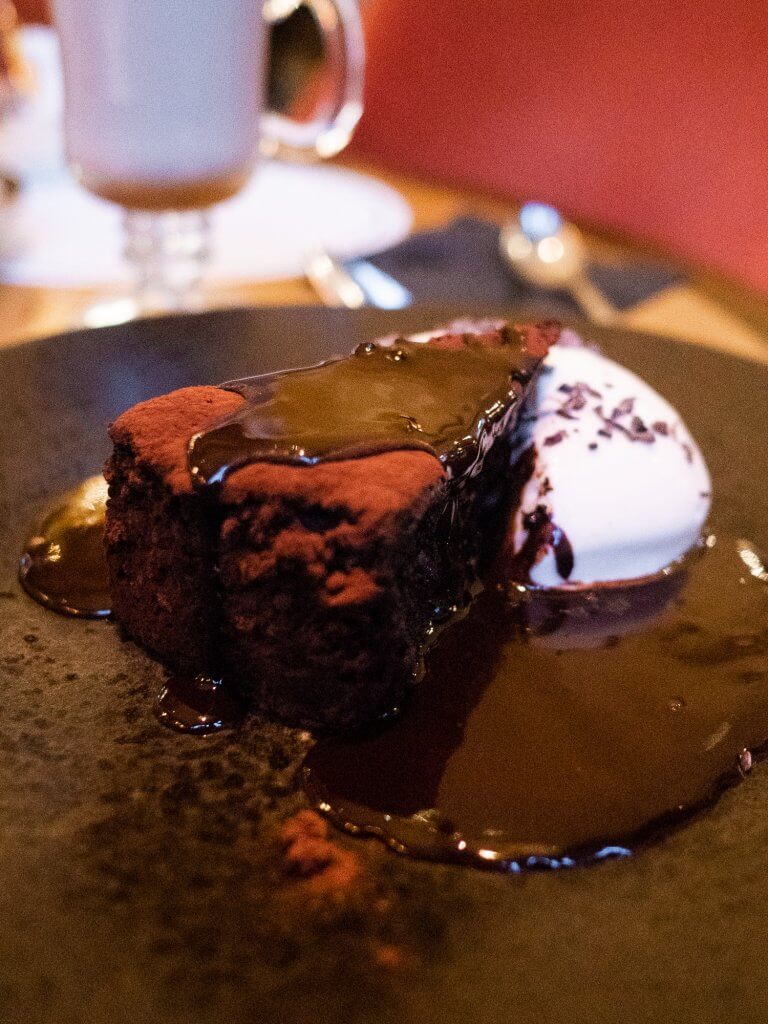 We knew we had to do a day trip out to the Dales during our trip, so we packed up for a hike and headed out into the countryside. While we didn’t technically end up going for a walk in the official ‘Yorkshire Dales National Park’ (that would have been an extra hour and 40 minutes drive, and we were pretty bored of driving by this point!), we went just an hour out of York to visit Masham in the Nidderdale AONB (basically just a smaller ‘Dale’). 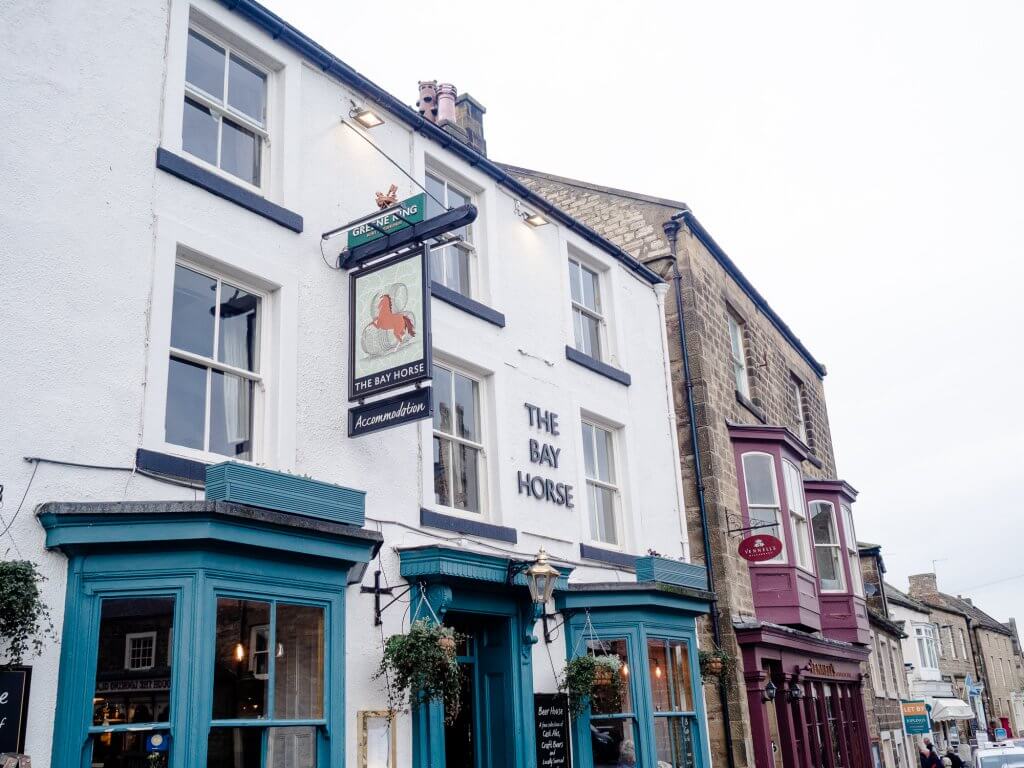 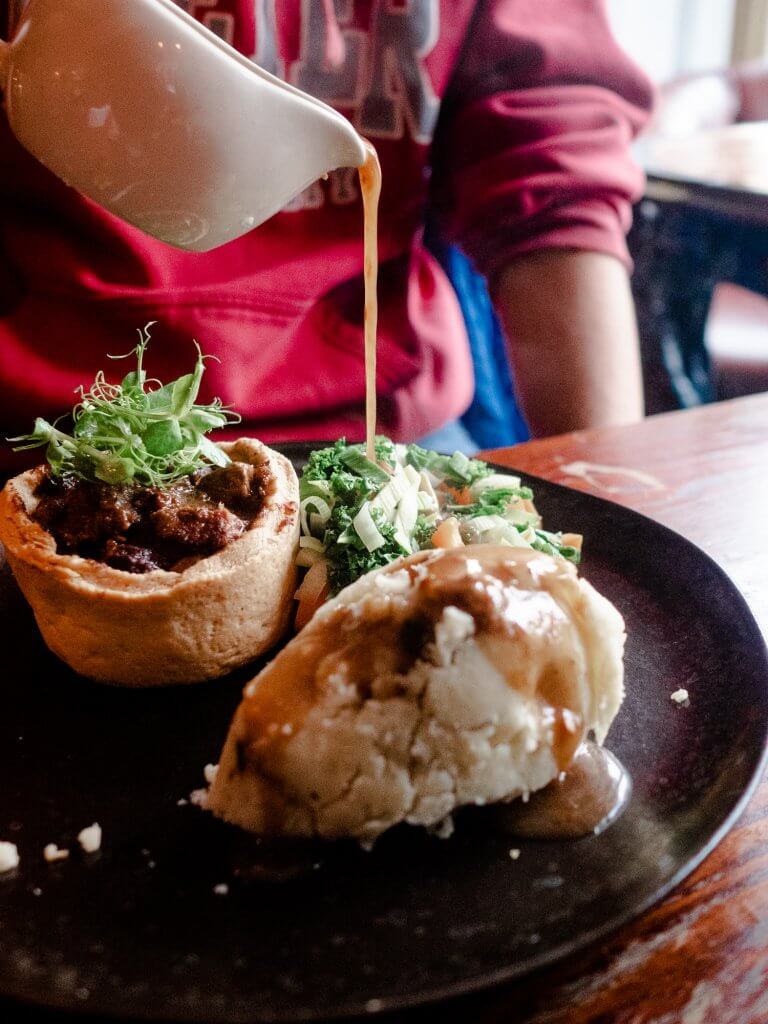 We ate a delicious British pub lunch in the country town of Masham at The Bay Horse (would definitely recommend – our food was delicious!) before driving five minutes down the road to nearby Leighton reservoir for a 2 hour walk through the countryside, in hunt of Druid’s Temple!

I found out about this particular walk online via the walkingenglishman.com, whose website documents some beautiful countryside walks all around England, and I was determined to see the Druid’s Temple for ourselves. 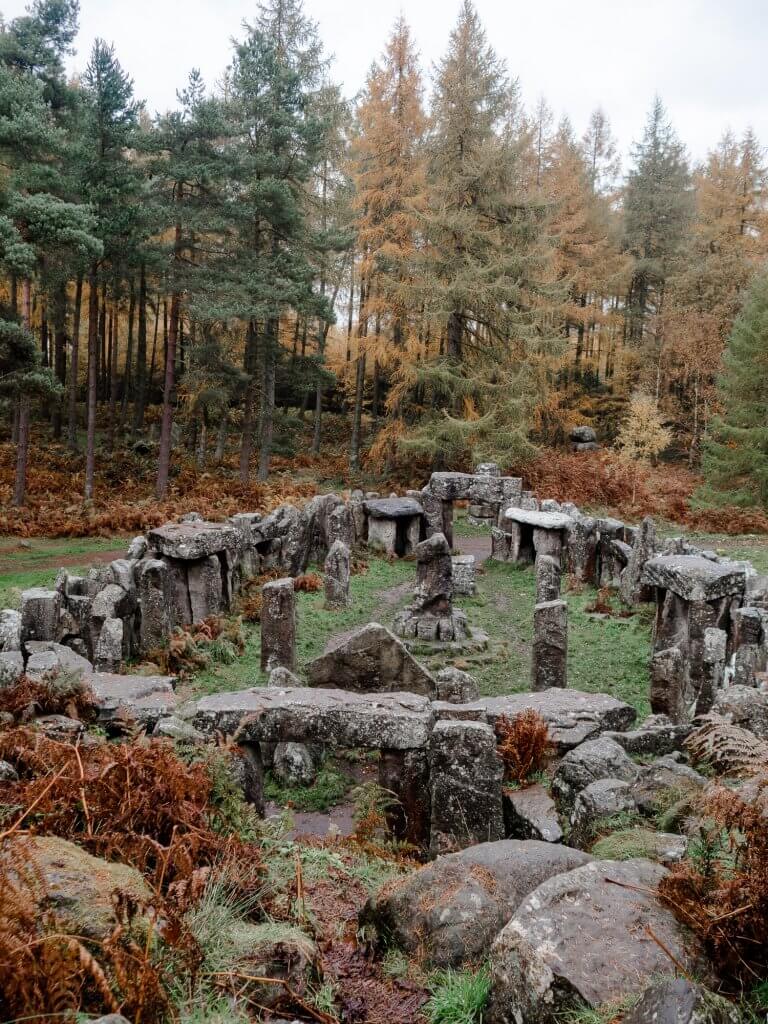 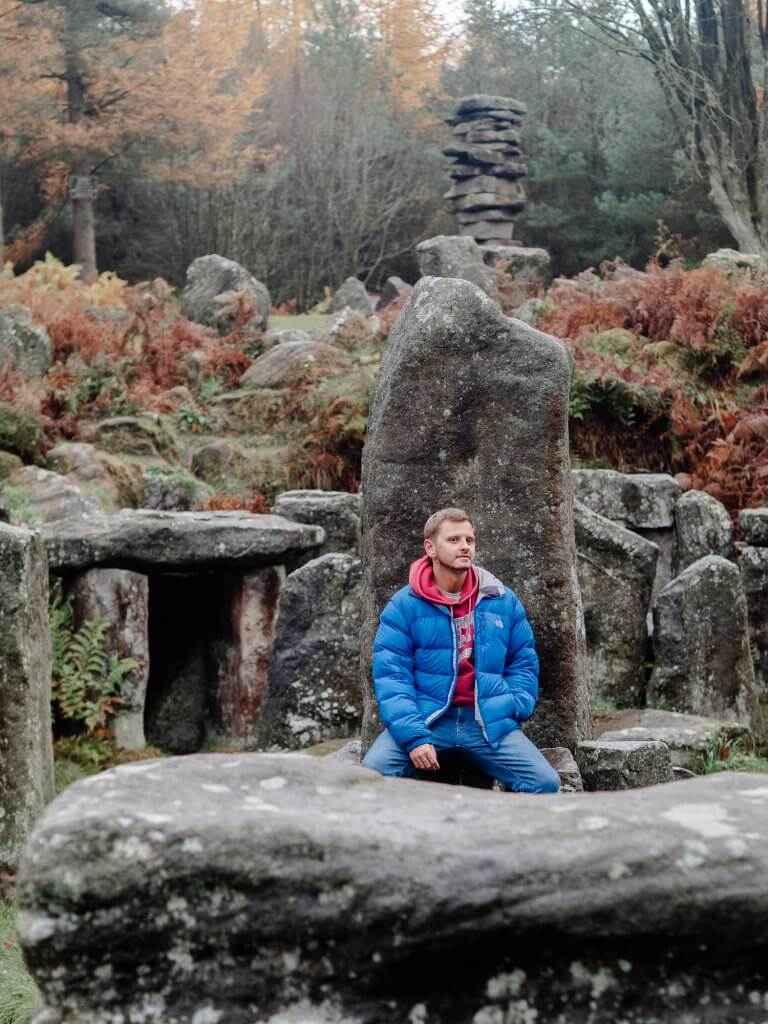 We found it in a clearing in the woods and it was worth the trip. Inspired by Stone Henge, it was built in 1820, and even has a little underground cave to explore too. 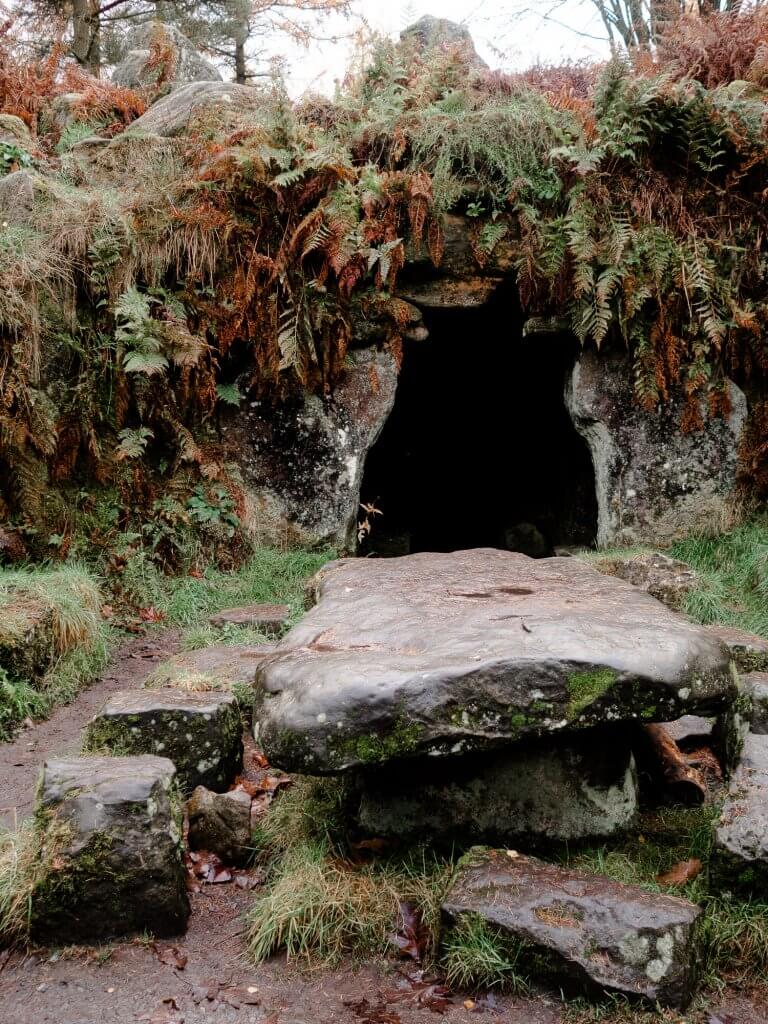 Sadly due to the incredible rainstorm that happened upon us during our day exploring the city, we never made it to walk along the old city walls of York, but I’ve been told they are a beautifully preserved historical site, dating 2000 years back to Roman times.

Meanwhile Clifford’s tower (we did manage to walk around the outside of it) was a Norman fortress built by William the Conqueror with a very sad and dark history. You can tour the tower but we didn’t have time for this during our trip.

Despite the fact that we visited in the first week of November, the city was already preparing for Christmas! We market stalls being set up, lights ready to be switched on and even a Christmas tree being erected, we wondered if the council mistakenly thought it was December!

However, my sister informed me that because all the uni students finish on the 1st December (yes, THE 1ST DECEMBER – don’t get me started, it’s ridiculous) for Christmas, the city starts all its Christmas celebrations early.

I’m not sure of the exact date that the markets open, but certainly I’d recommend visiting once all the students have gone in early December, to experience the town in a wintery wonderland. 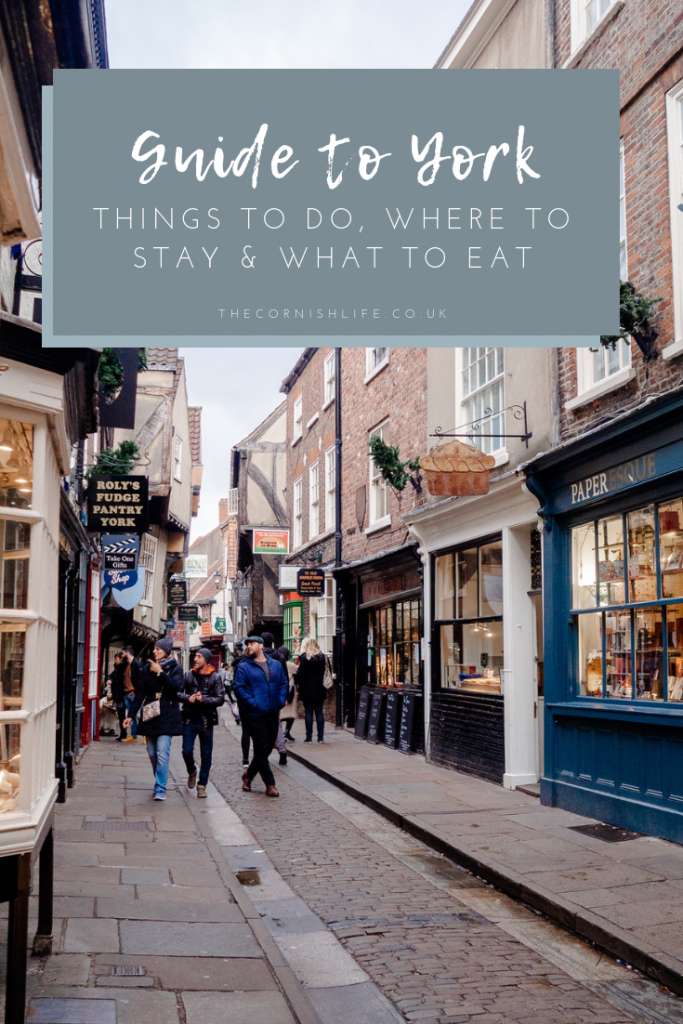 If you’re looking for a quaint English city getaway, I’d definitely recommend York! Its beautiful town is steeped in history, and there’s plenty to do, rain or shine.