After my week in Cascais and quick stop in Lisbon, I headed down to Lagos on the Algarve coast.

Roughly a 4 hour bus trip from Lisbon, I arrived in Lagos at around 7pm. For some silly reason I had automatically assumed that Lagos (being a popular tourist destination in the extremely popular and touristy Algarve!) would have Uber. In both Cascais and Lisbon I had been using Uber to get to and from difficult places (super cheap in Portugal too!), so I assumed it was a thing.

But I was wrong; there was no Uber and at 7pm I couldn’t find any taxis and my phone battery was running dangerously low. So I ended up walking around lost for a good hour trying to find my hostel whilst it slowly got dark… not so fun. 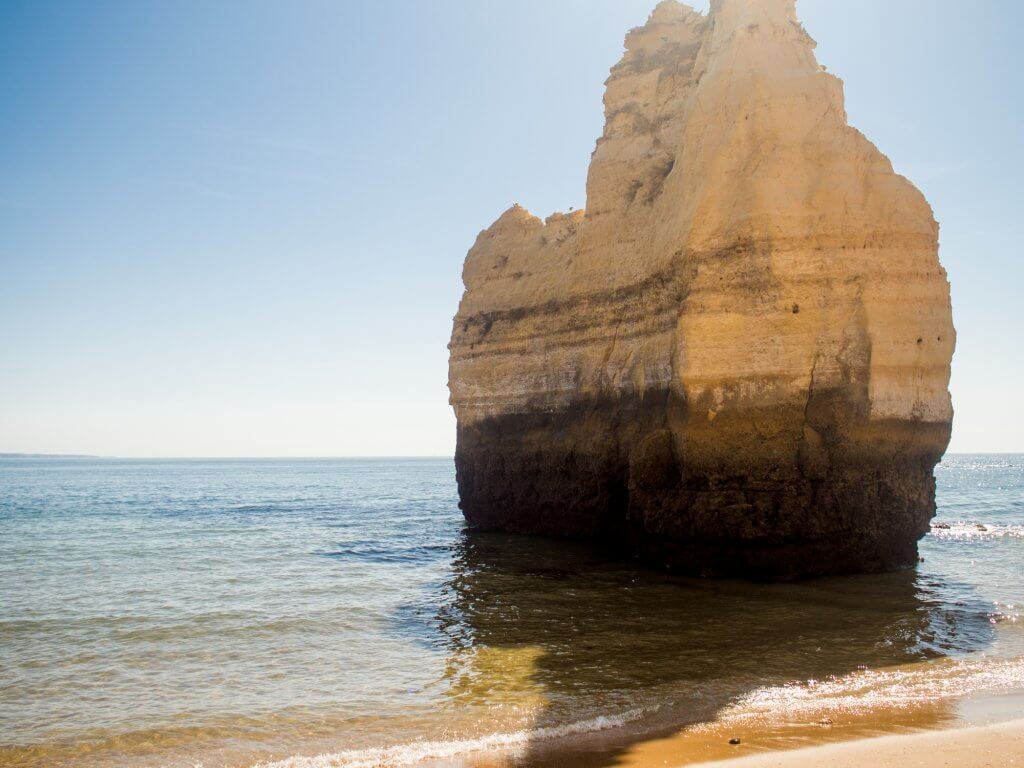 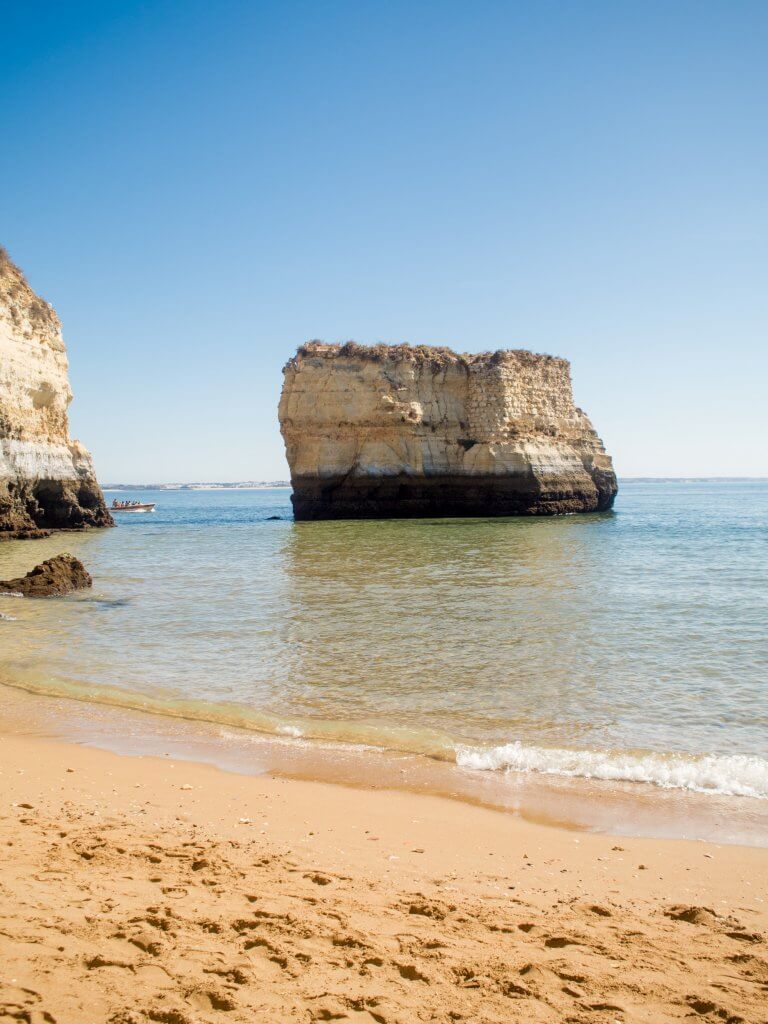 However, once I arrived at the Bura Surfhouse all was well and good! Everyone was super friendly and I slotted right in, sharing dinner with another girl who had just arrived on her own, and making friends over a few glasses of wine. As hostels go, Bura is one of the top rated in Lagos, and for good reason! It was super well equipped, had loads of activities to do, and even had a roof terrace and a swimming pool outside!

I was only stopping in Lagos for a day or two before my flight home, and my whole reason for going there was to see the famous coastline and epic caves along the seafront, so that is what a group of us did in the morning! 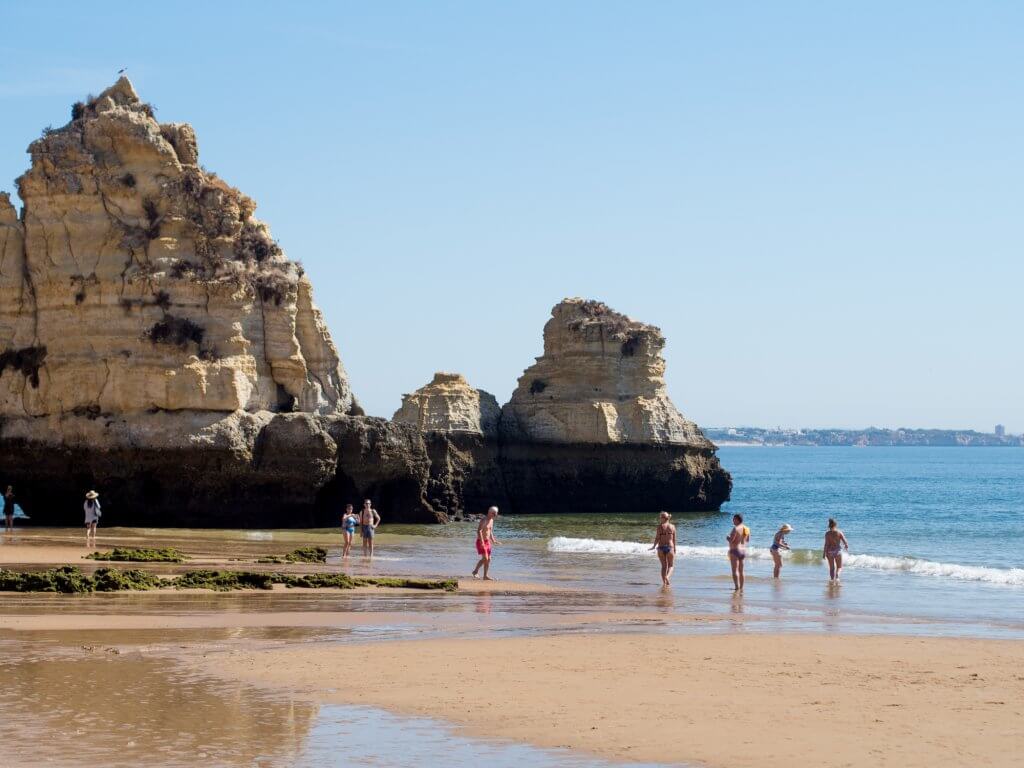 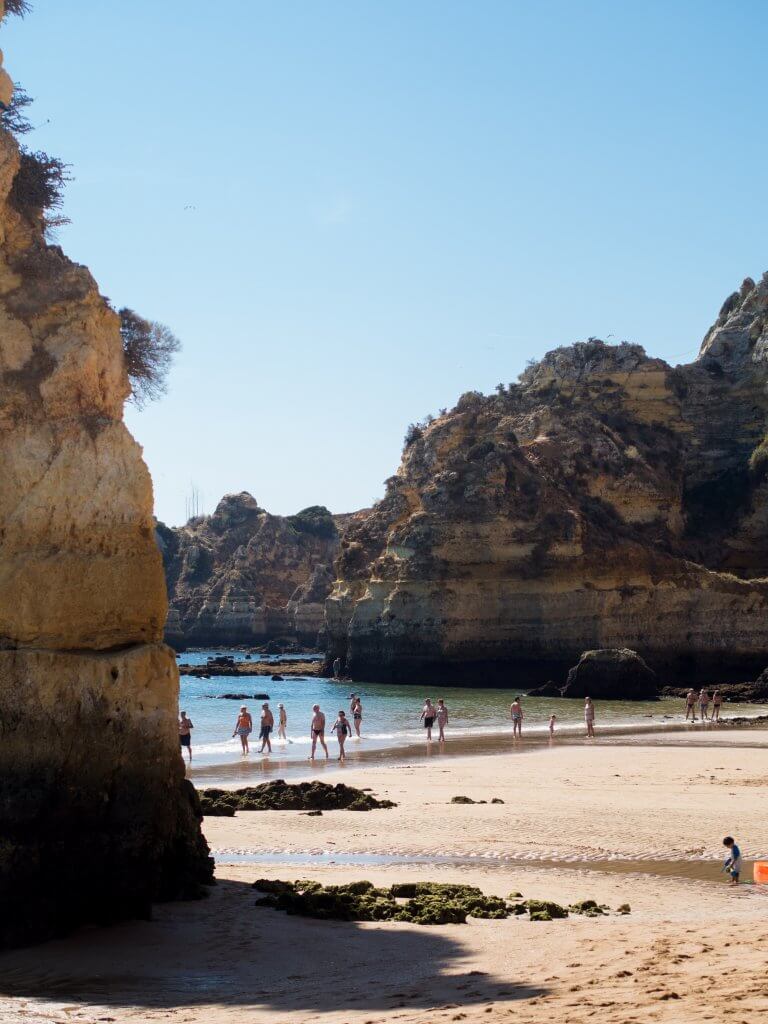 About a 10-15 minute walk from the hostel, we ambled down to the beach where the water was perfectly still and clear, and (being late September) the sand was surprisingly empty of tourists! Definitely the perfect time to go, as the temperature was still a toasty 24 degrees.

As we carried on walking along the beaches, in and around all of the rock stacks and climbing through caves, I was amazed at how long this epic scenery went on for. Honestly from the photos online I thought it was just a couple of beaches long but it goes on for miles, with too many hidden coves and caves and awesome rock formations to count! 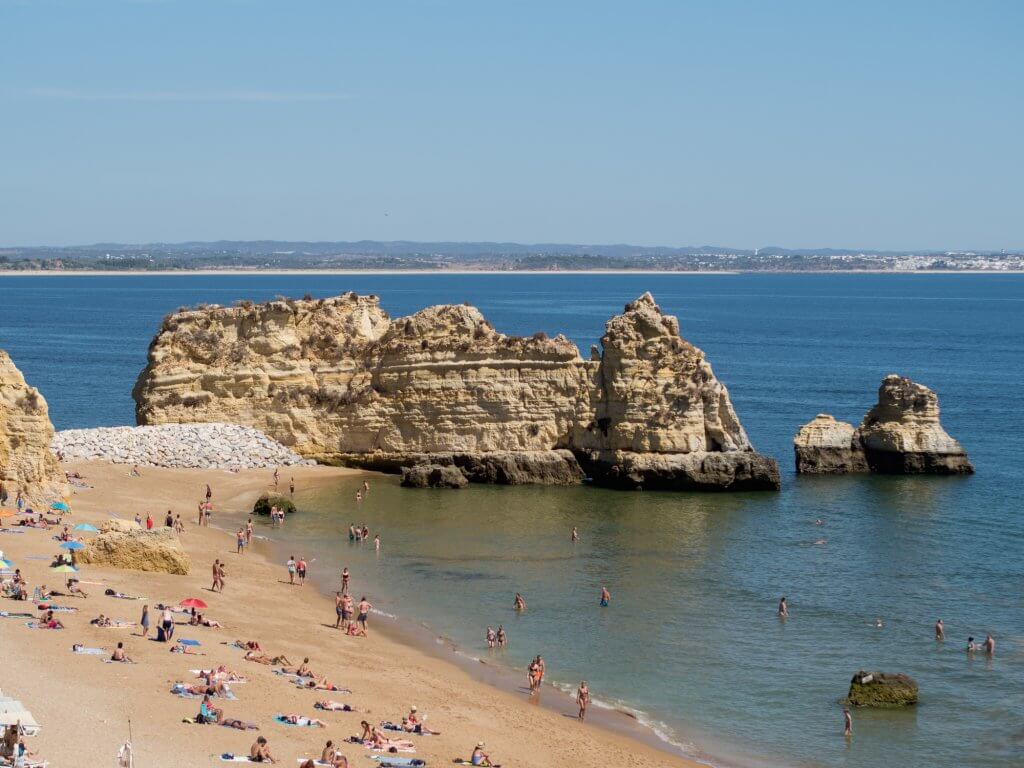 You can book onto kayaking and stand-up paddle boarding tours to explore the caves and coastline even more, but (in a bid to save some money… which we obviously just spent on the Friday night out anyway, oops!) we opted out of these in favour of a good old fashion sea swim! We ended up swimming in and out of amazing caves and had an amazing time in the sun.

One of the most popular spots along this coast is Praia do Camilo, and it was definitely my favourite! It’s a truly beautiful white sand little cove and the rocks are just incredible there. This is probably the most famously known place where everyone takes their Lagos photos. 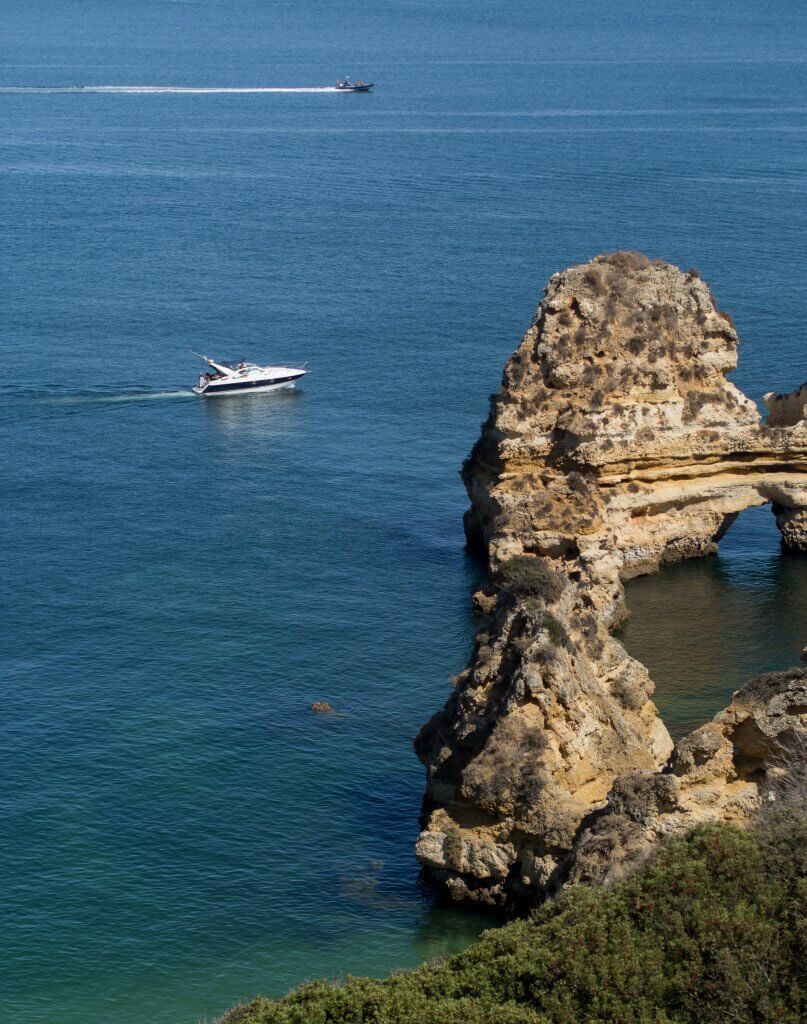 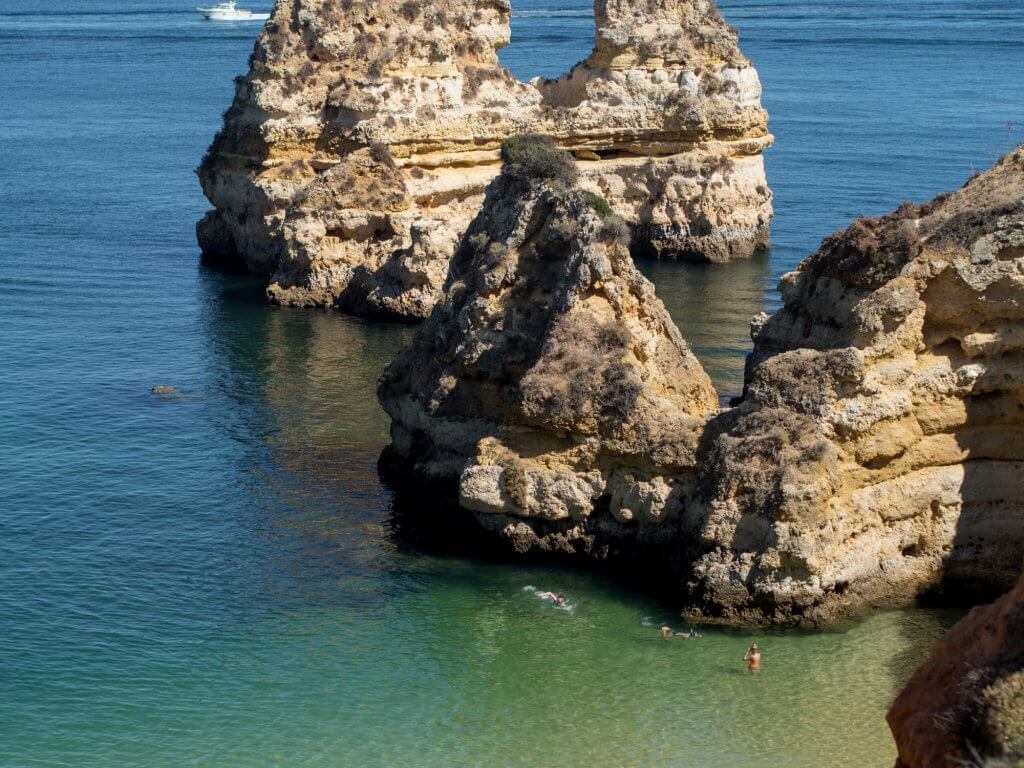 I’m so glad I did this quick stopover to the coast as I had the best couple of days! The Algarve is known for being a bit of a party hotspot (and yes, we did get very drunk and stay out til 5am, when my flight taxi was at 6am…oops!), but there’s so much to explore around it and lots of beautiful adventures to go on in the day too. I’m genuinely planning to return soon (it’s so cheap and quick to fly to Faro – 40 minutes from Lagos!) and I’ll definitely be staying at Bura again as it was awesome there, hopefully for a bit longer next time!

Check out my other Portugal posts about Cascais, Sintra and Lisbon too!