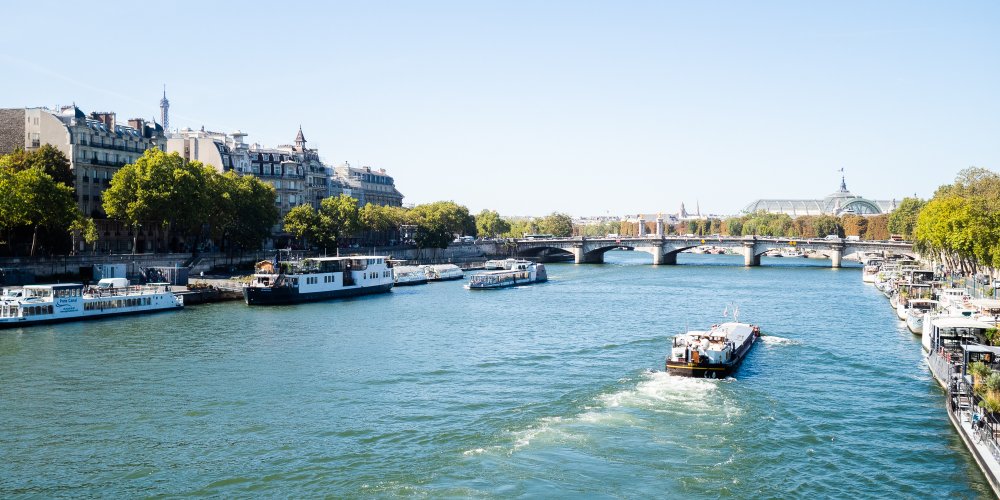 Last month Alex surprised me with a spontaneous trip to Paris for my 25th birthday 😍.

I know – a very romantic gesture and a surprise I’ll definitely be remembering for years to come. Alex also turned 25 this year (I took him to stay in a treehouse and to visit Longleat back in April) and although some people may not be fussed, we both feel that 25 is quite an important number; it is a quarter of a century after all!

So he clearly decided to spoil me, which I didn’t expect at all and I’m incredibly grateful for. We’d both spoken earlier in the year about where we’d like to go for a city break, and I think we both said revisiting Paris would be our preferred choice. We’ve both been before a couple of times, but both agree it’s one of our favourite cities with plenty to do.

Also I’ve only ever been in December! Christmas is of course a wonderful time to visit Paris, with all the markets and festivities, but it’s also EXTREMELY cold so I’ve never had the ‘lets wander through the streets and sit in the park in the sun’ experience of Paris before. 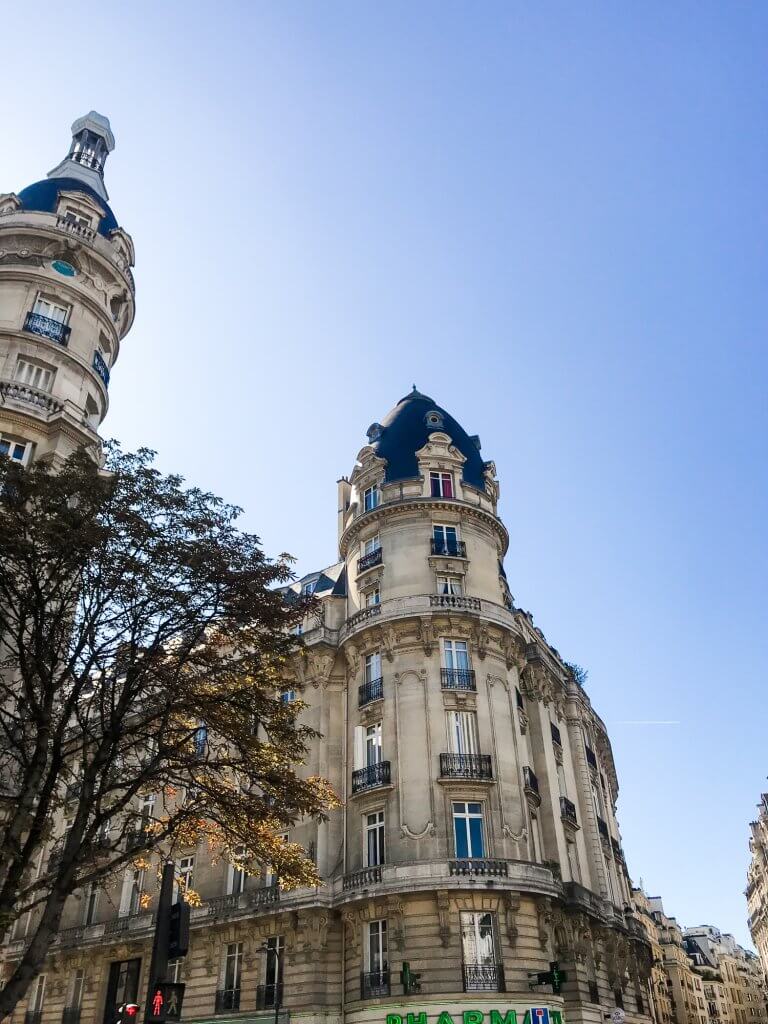 The day before my birthday

All Alex told me beforehand was to pack a hand luggage sized suitcase and bring my passport, so naturally I realised we were getting on a plane. Where from and where to I had no idea until we turned off for Exeter airport on the Wednesday afternoon. Once inside, Alex gave me my boarding pass, revealing that we were heading off to Paris!

It’s a super quick flight – just over an hour there and less than an hour back! I’ve also now decided that Exeter is my new favourite airport. It’s big enough to have all the facilities you’d want, but still small enough that everything is super efficient and not too stressful.

We flew into Paris Charles de Gaulle airport and got on the train to find our apartment. 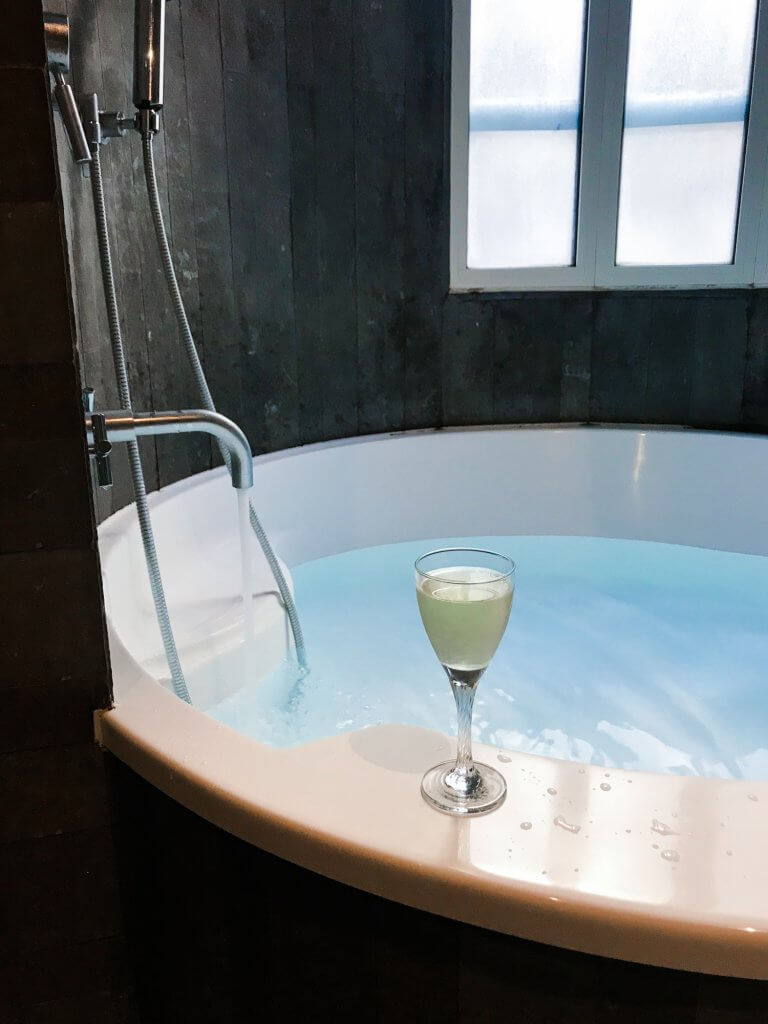 Alex did really well in booking this apartment! It was a studio self-check-in serviced apartment, with a little kitchenette and comfy double bed (and juliet balcony), just a 2 minute walk to a tube stop and a 15/20 minute walk to the Eiffel Tower!

The other awesome thing about this place was the bathroom 😍. The decor was beautiful; with modern double sinks, mirrored doors, a rainfall shower and a large round spa tub too! 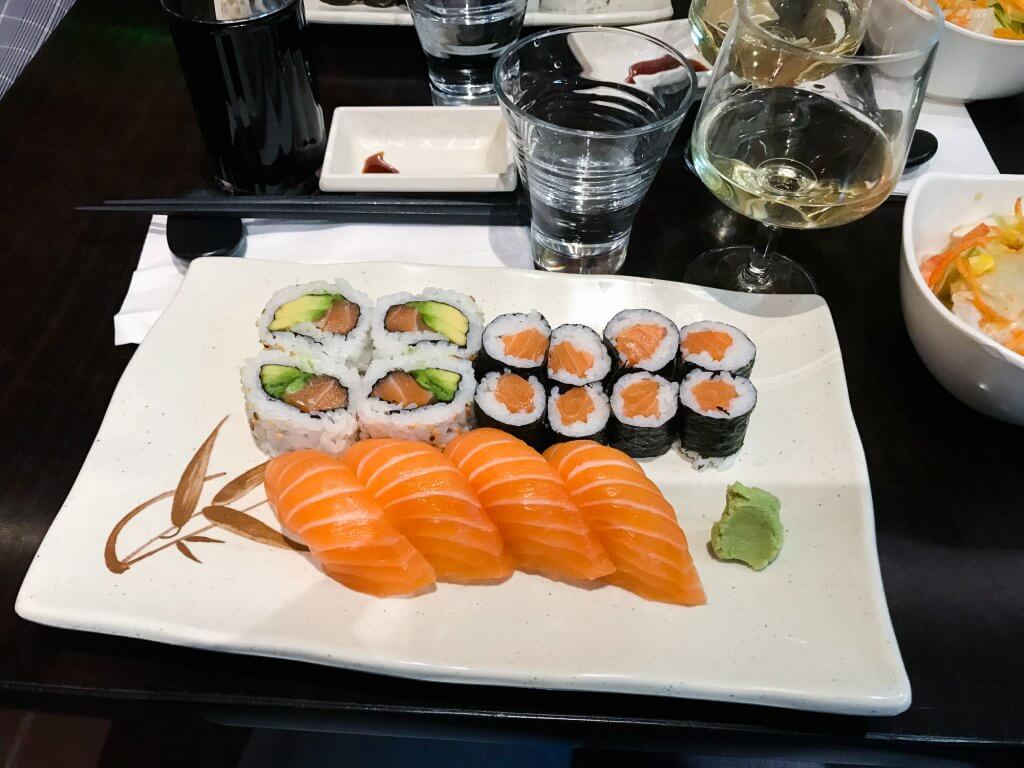 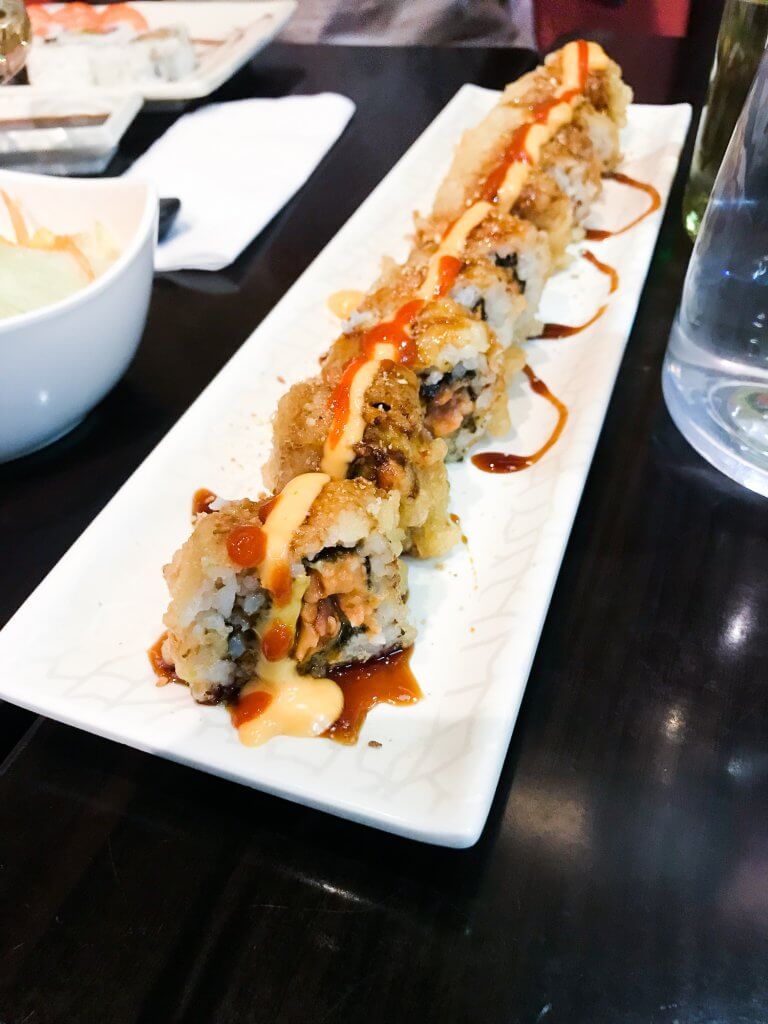 Once we got settled in, we immediately logged on to Google to find out where to have dinner. In Cornwall we are deprived of sushi, and we are pretty obsessed, so naturally we hunted out the best sushi place we could find!

Wrap n Roll Sushi came out top for quality and price, so we made our way there and we were NOT disappointed. This was up there with some of the best sushi we’ve ever had AND it was really great value too. I know it seems strange to go all the way to Paris and eat Japanese food but it had to be done, and I’m so glad we did – it was delicious. 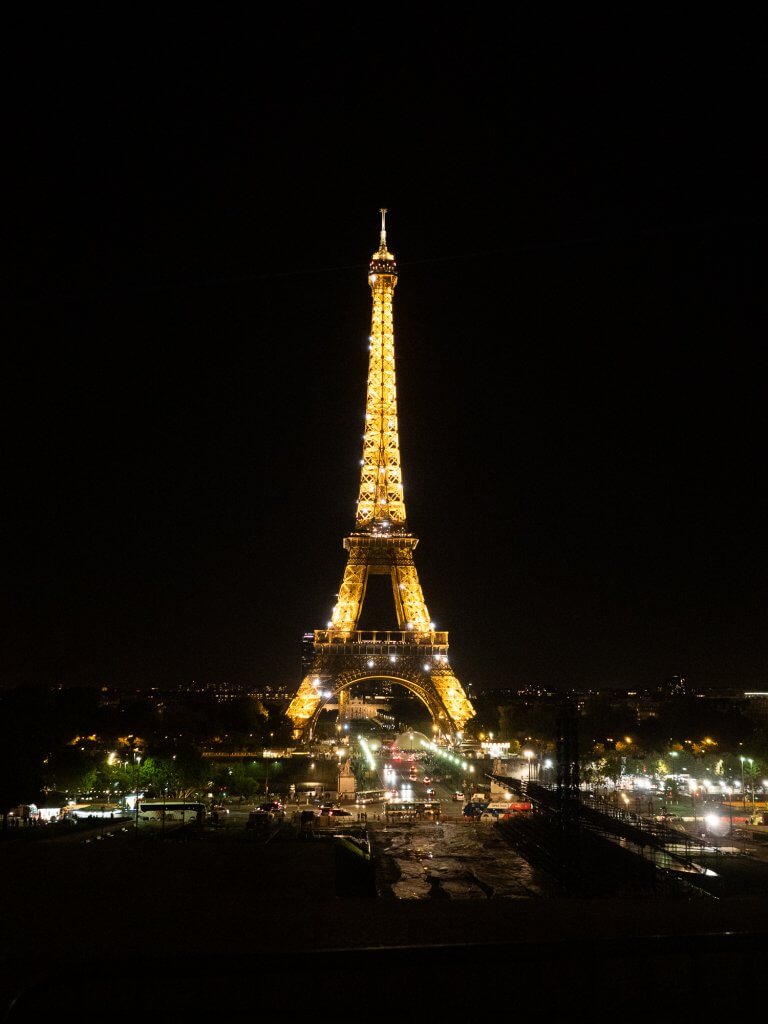 Getting our timings just right for sparkle o’clock!

After our sushi, we got off the tube at Trocadero gardens so we could catch a view of the Eiffel Tower all lit up. We arrived just in time, grabbing a hot chocolatey crepe on the way, to see the tower’s sparkling lights turn on! This happens every evening each hour for 5 minutes, and is one of the best sights in Paris in my opinion. 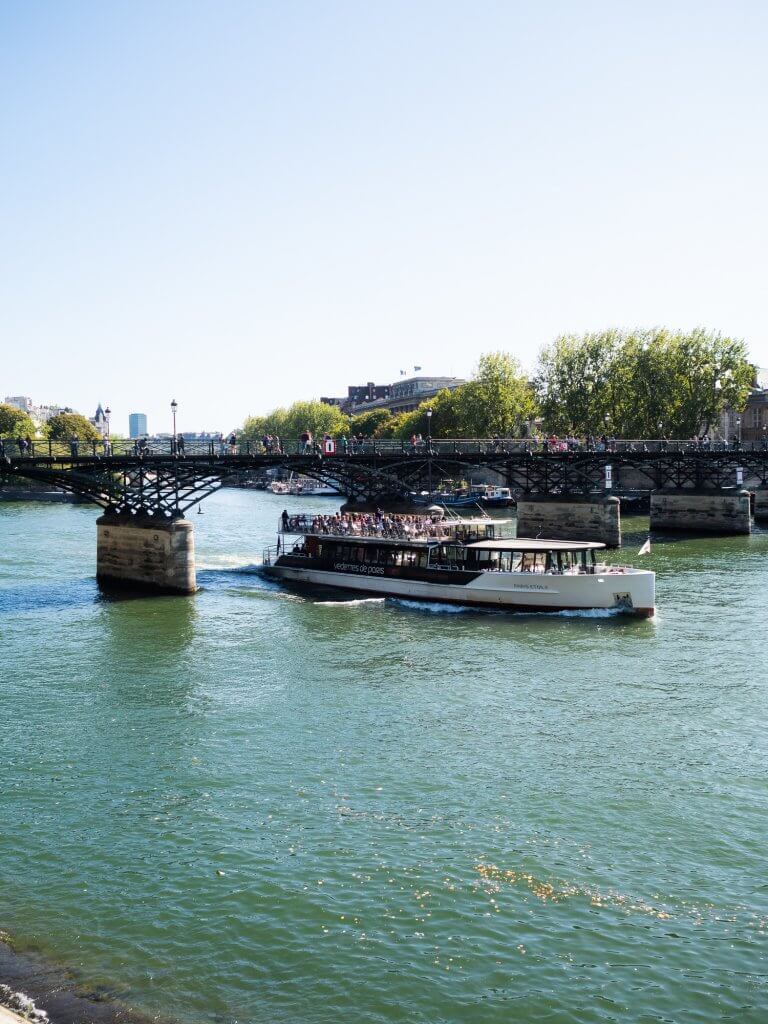 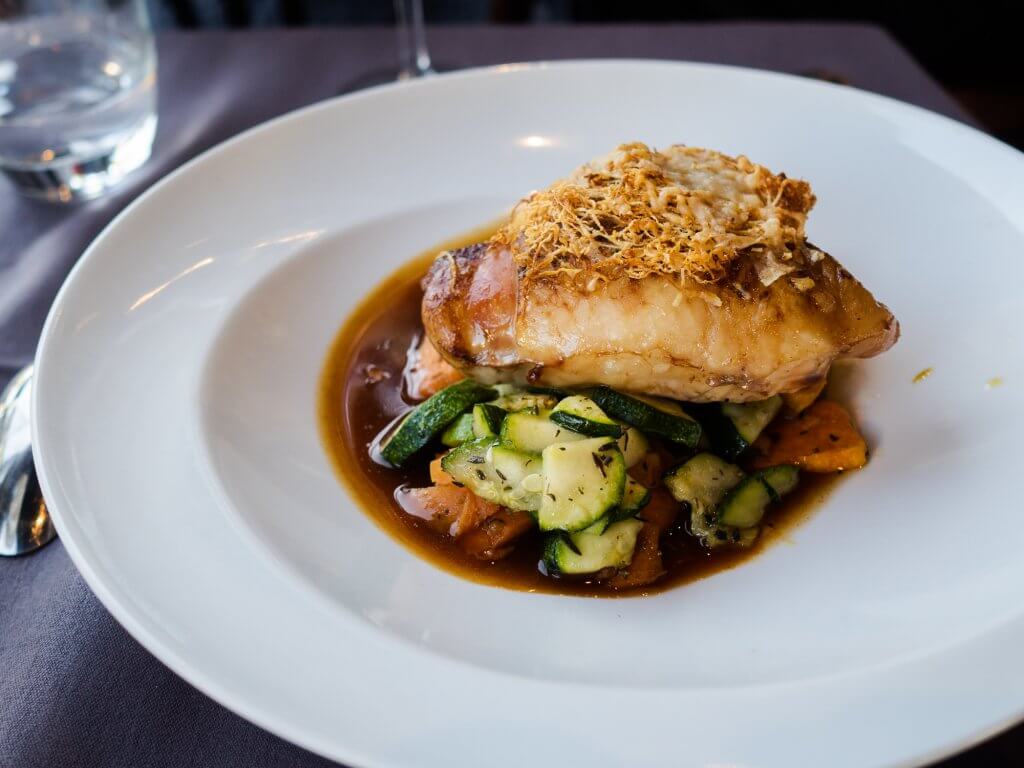 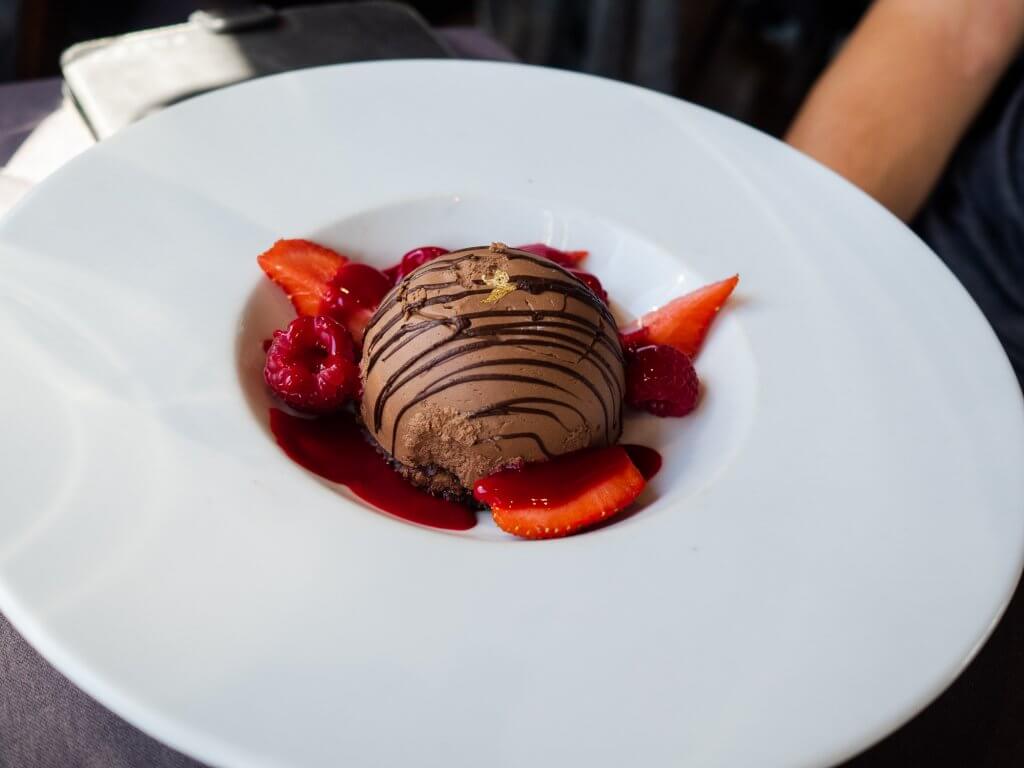 Birthday lunch on the river Seine

We got up on my birthday morning and took things very slowly. Having both visited Paris before it was so nice to not be in a rush to go and visit and see everything and try and fit in all the landmarks – this city break was exactly that; a break! It’s one of the best reasons to visit a city more than once.

Alex’s parents very kindly booked us onto a river cruise of the Seine, with a three course meal for lunch as my birthday gift! I was so happy when I found out, as all I’d been saying to Alex on our flight over was how the one thing I really wanted to do in Paris that I’d never done before was go on a boat on the river.

As you can see from my photos, we were totally blessed with the weather for our whole stay in Paris. It was clear blue skies and at least 23 degrees each day. This made for perfect boating conditions, and we enjoyed a delicious lunch while drifting past the Notre Dame, Eiffel Tower and beautiful bridges of Paris. 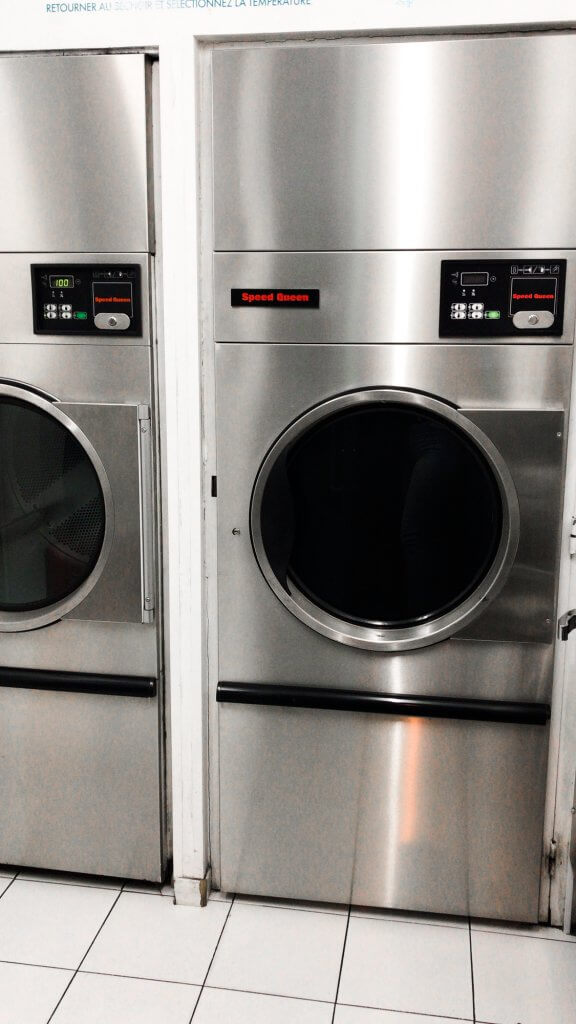 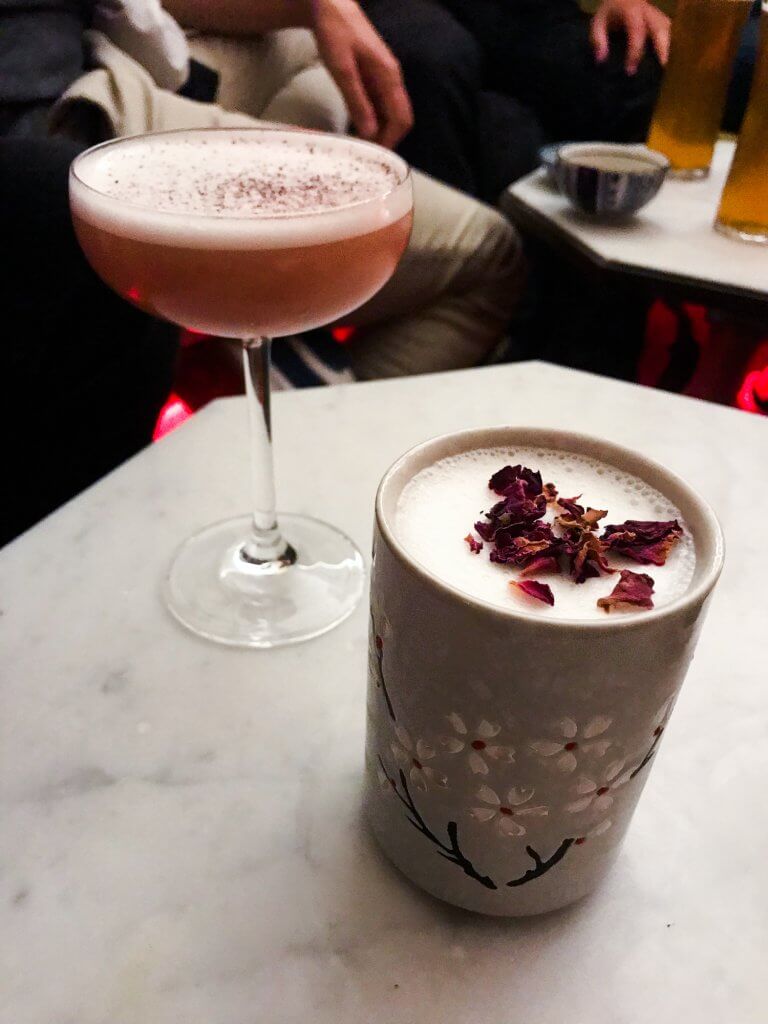 A hidden bar in… a laundrette?!

After our lunch we had a lazy afternoon and decided to hit the bars in the evening! After some research, Alex suggested we head to the Oberkampf area of the city in search of a quirky hidden bar called Lavomatic, which is disguised as a Laundromat/laundrette.

We eventually found it and sure enough, it looked very unsuspecting and realistic as we walked in. It was very entertaining trying to find the hidden button that popped open one of the washing machine doors, but we found it and it opened to reveal a darkened stairway up to to an attic bar buzzing with life and plenty of cocktails! Would definitely recommend if you like a speakeasy style experience. 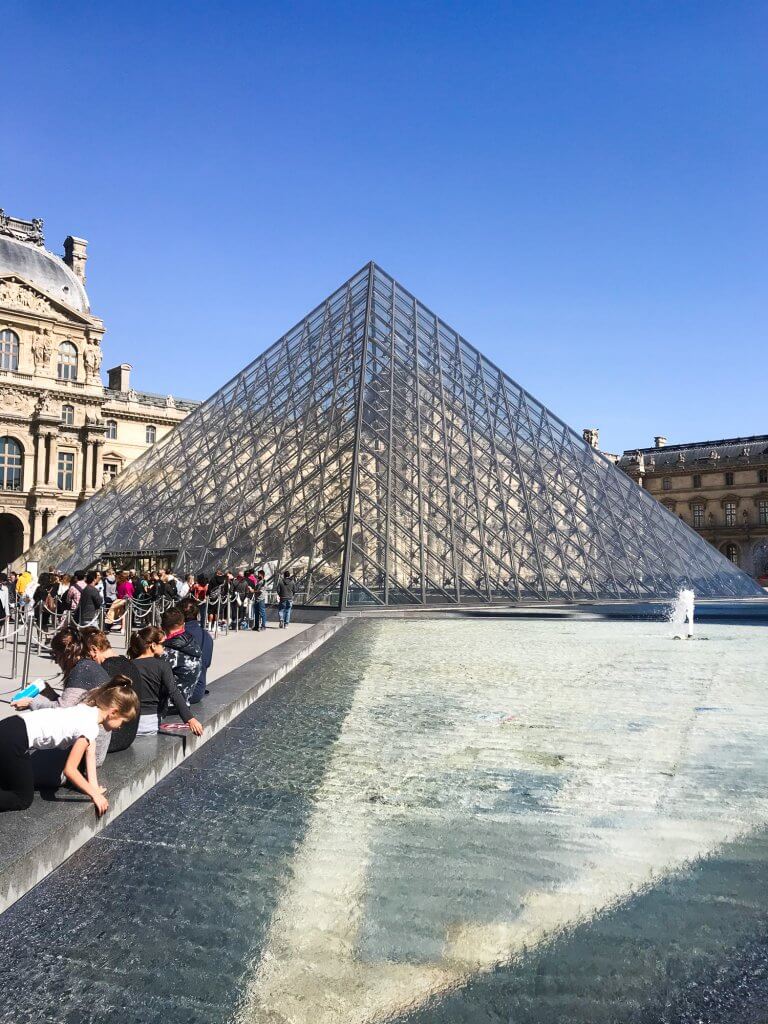 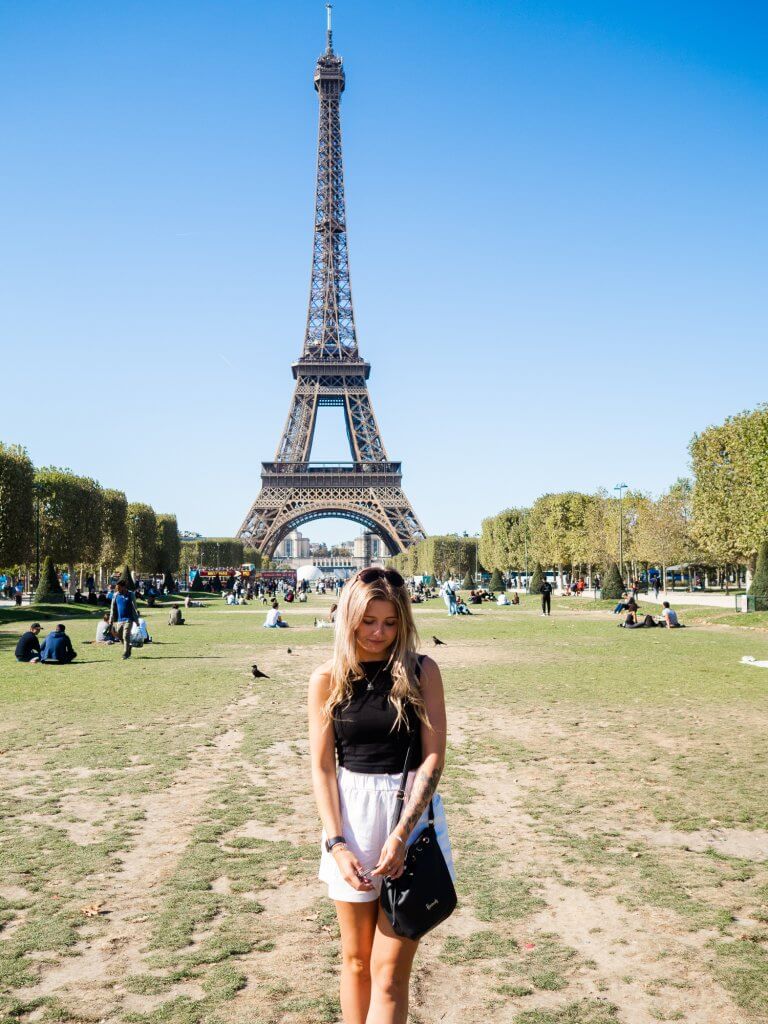 Picnics in the parks

What is Paris without some Eiffel Tower posing and picnics with this incredible view? We made sure that on the Friday we got some food from a local supermarket and sat down in the sunshine for a perfect lunch in the gardens by Paris’ most famous monument.

As well as admiring this crazy piece of architecture, sitting here is BRILLIANT for people watching. It’s also totally free! 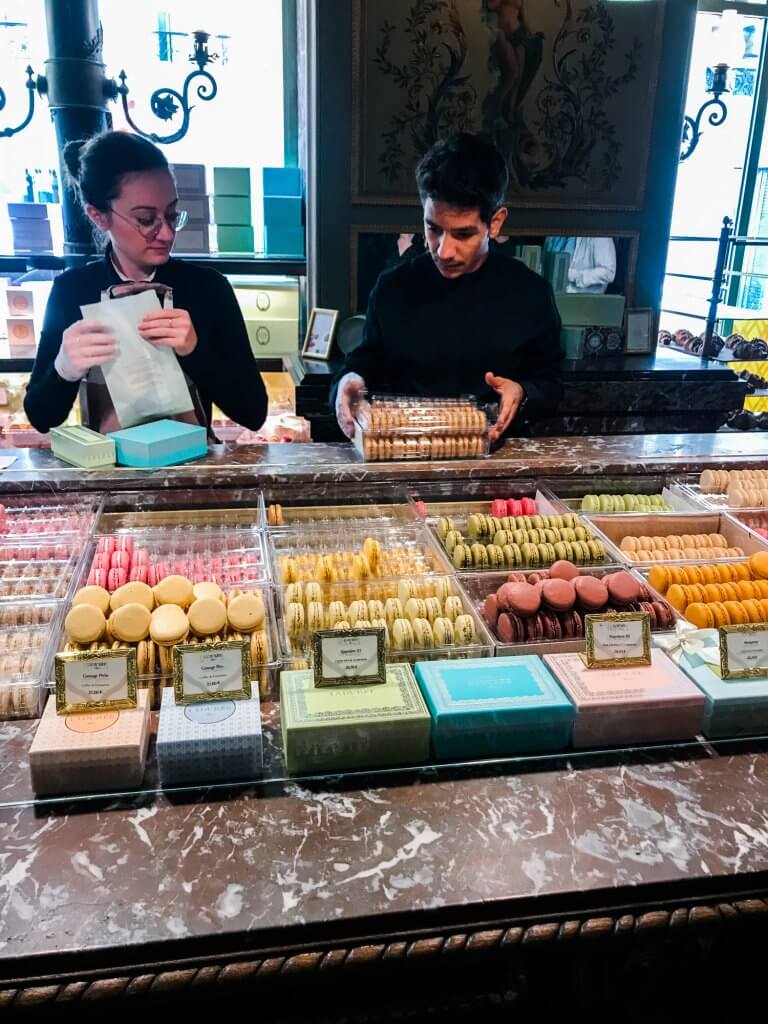 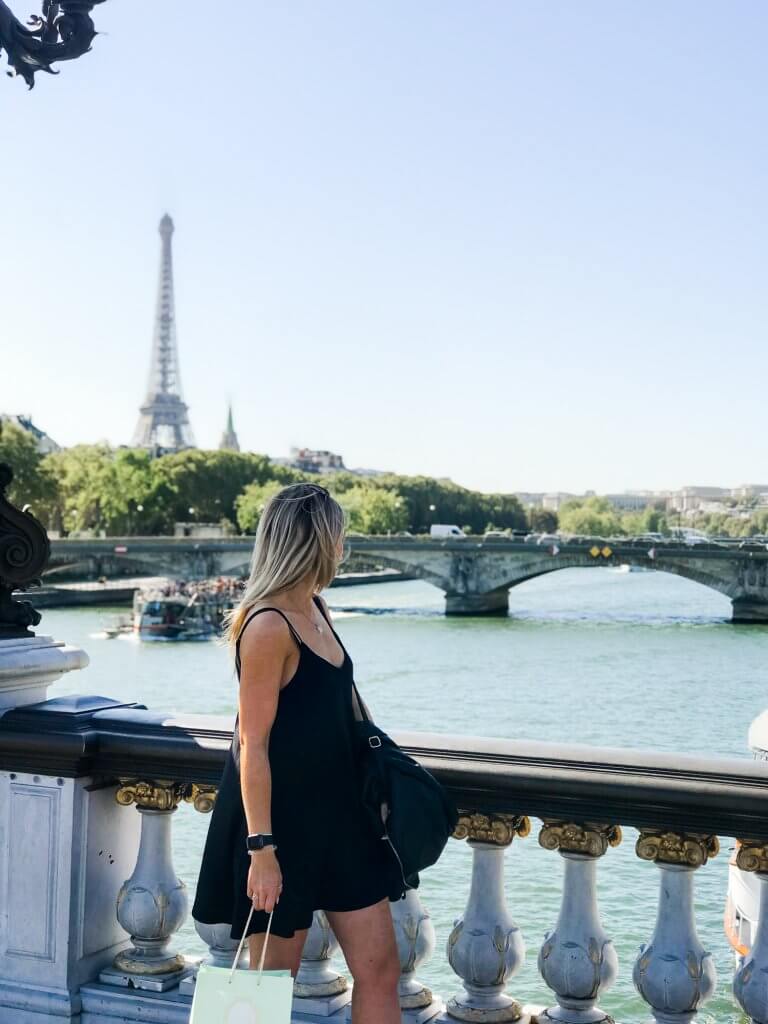 A quick stop in Ladurée…

We couldn’t go to Paris without me popping into one of my favourite stores – Ladurée. Possibly one of the city’s most well known luxury bakeries, their macarons are to die for, and their boxes and gift bags are so beautiful that they’re the perfect souvenir to keep at home to remember your trip. 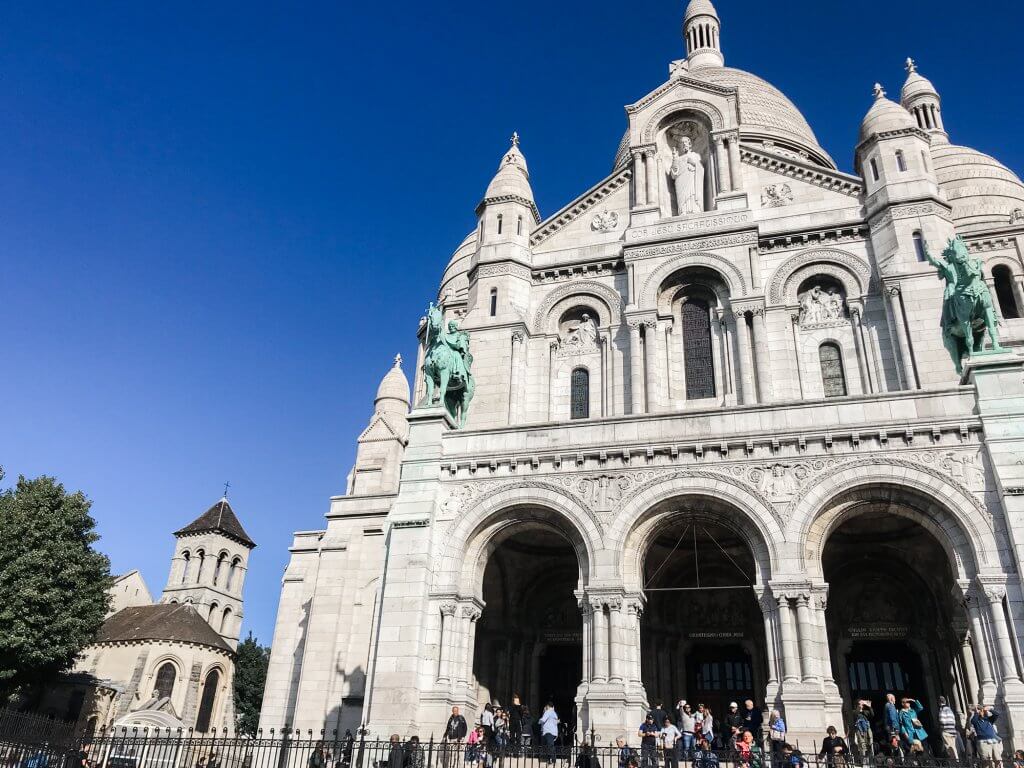 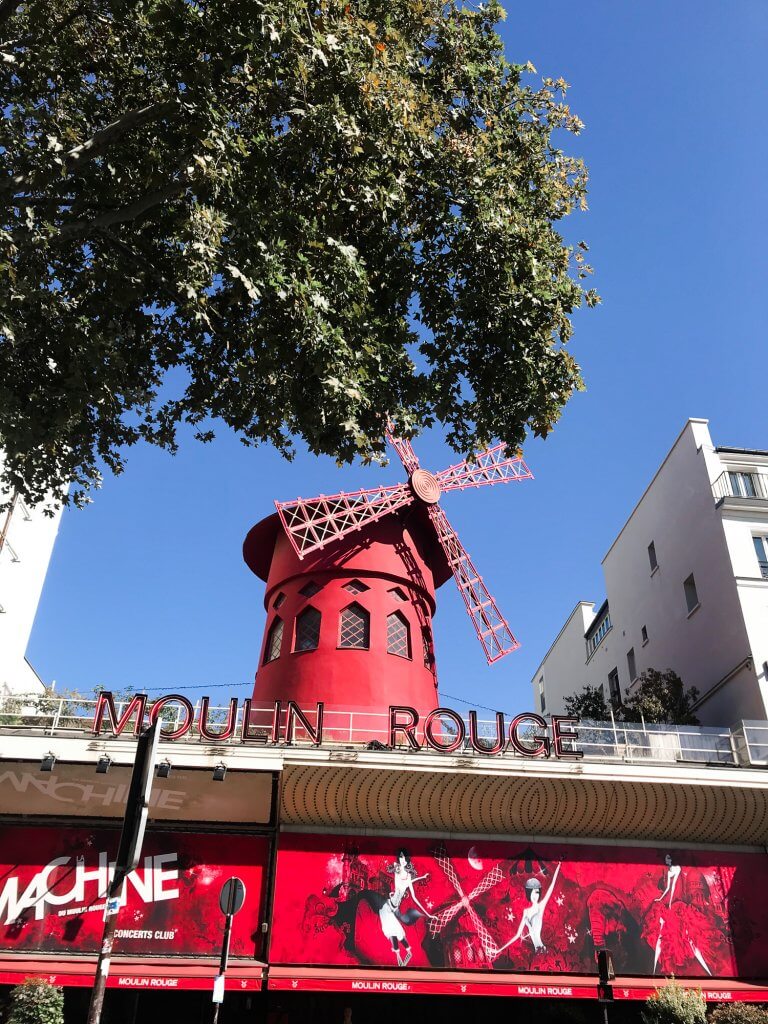 On the Friday we quickly discovered that the metro line closest to our apartment was down for maintenance, making it very tricky to get anywhere by tube. But as I say, we were so insanely lucky with the bright sunshine, that we didn’t mind walking everywhere and being outdoors in the slightest.

By the end of the day, we totalled just over 25,000 steps according to our fitness trackers – which is one of the highest counts I’ve achieved in a long while! 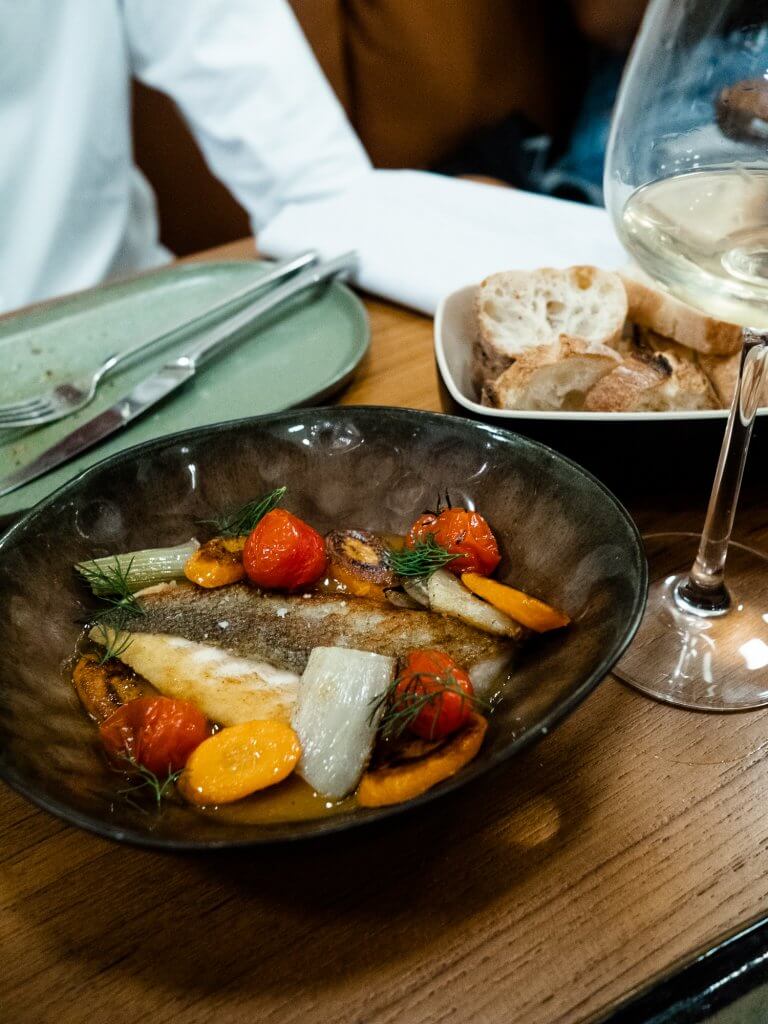 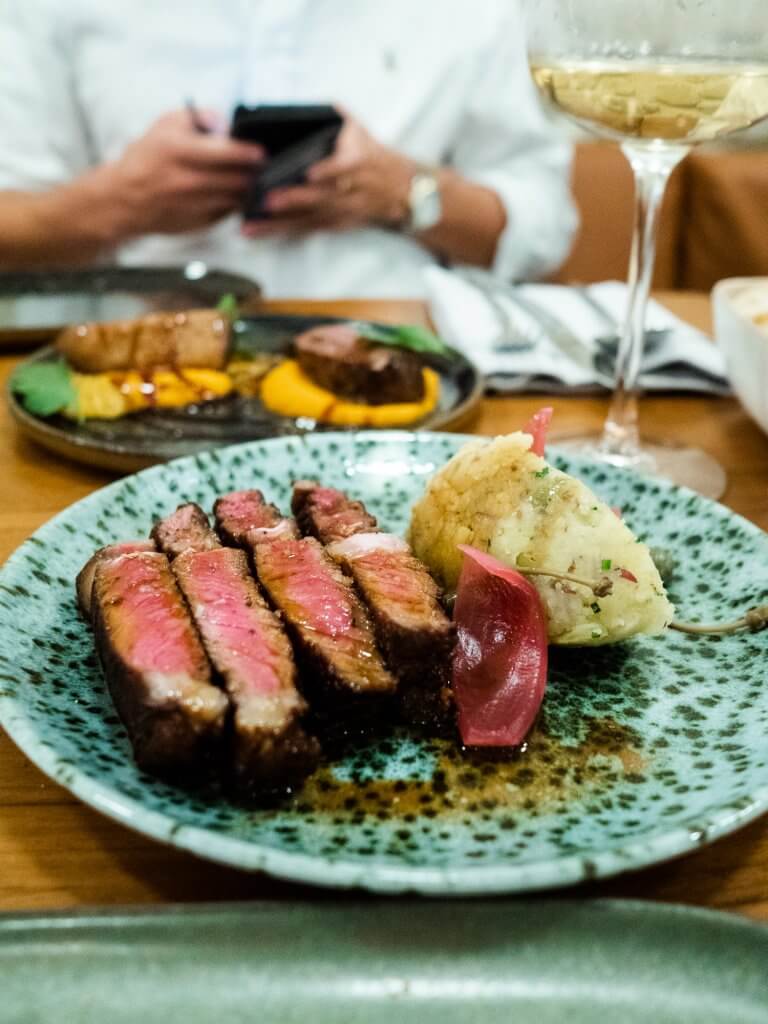 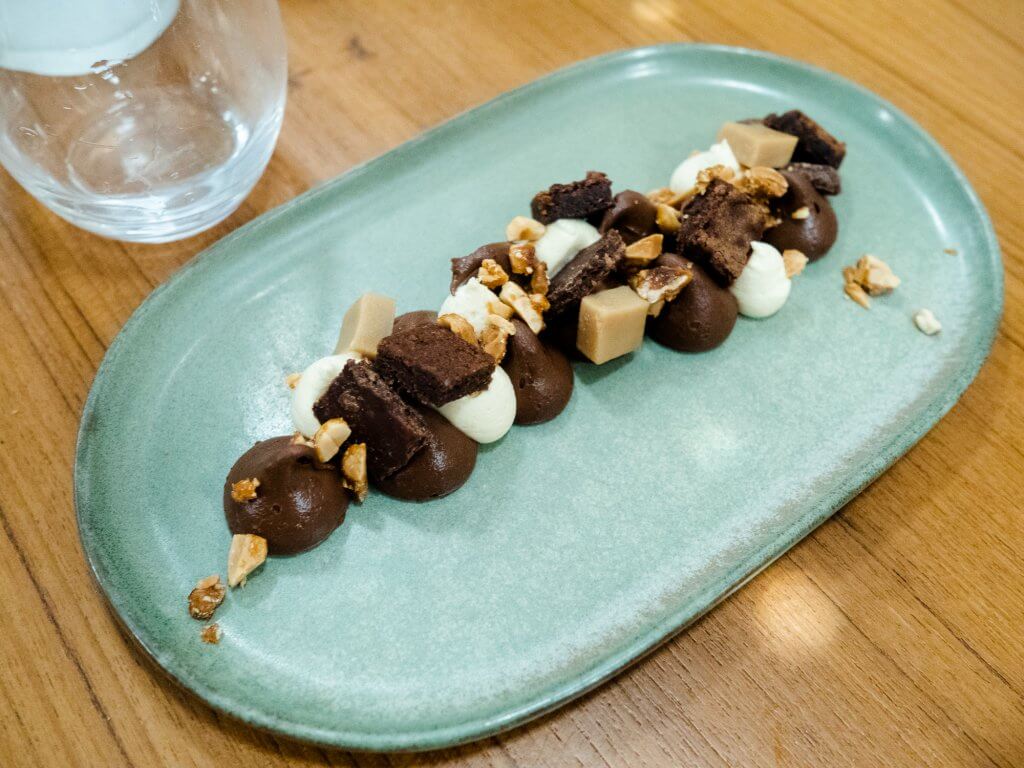 I’d done a little research during the day as we’d been lazing around in the parks, and stumbled across a restaurant called HEBE based in the Latin district. With excellent ratings, dishes designed by two Michelin-star chef, Michel Portos, and a very reasonably priced tasting menu, it was too good to resist!

The meal was amazing – super tasty, and we even received a complimentary glass of bubbly at the start as apparently they were celebrating their anniversary of the restaurant being open. I would highly recommend for those looking for Michelin quality food without the extreme price tag! 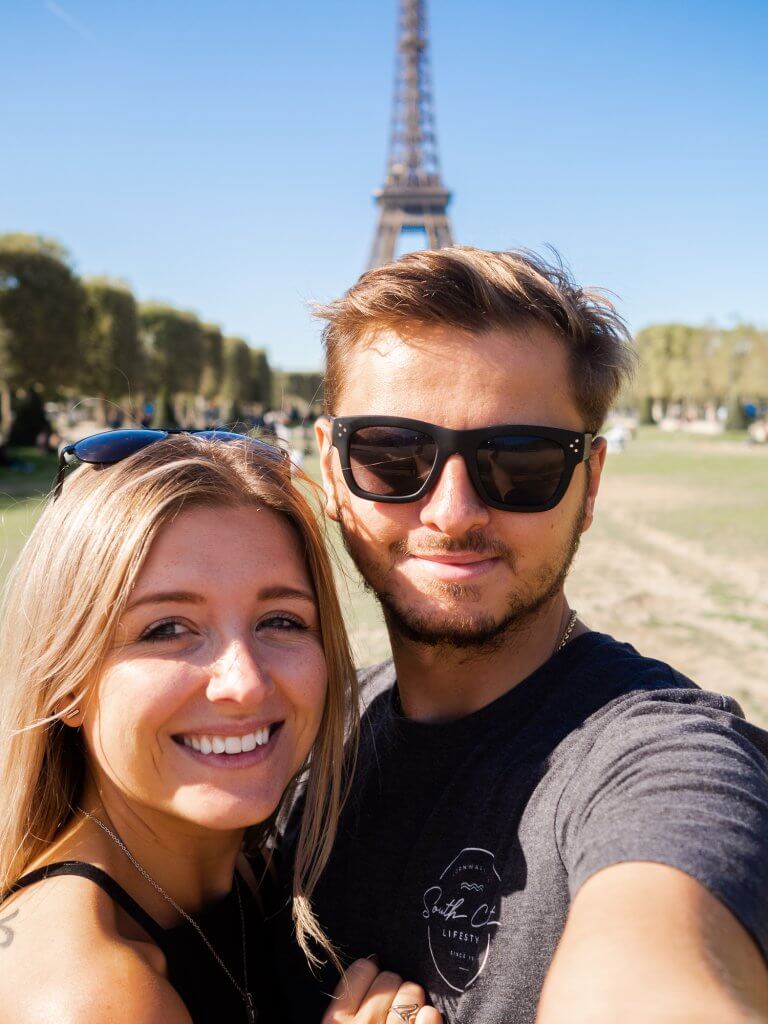 ‘Til next time, Paris!

We had an amazing time and I can’t thank Alex enough for spoiling me so much. I promise I won’t expect a surprise like this every year! 😂

Have you ever been to Paris before? What are your top recommendations for this city break?

← 14 Reasons to Visit St. Mary’s on the Isles of Scilly
Mouthwatering Burgers in St. Ives at Beer & Bird →