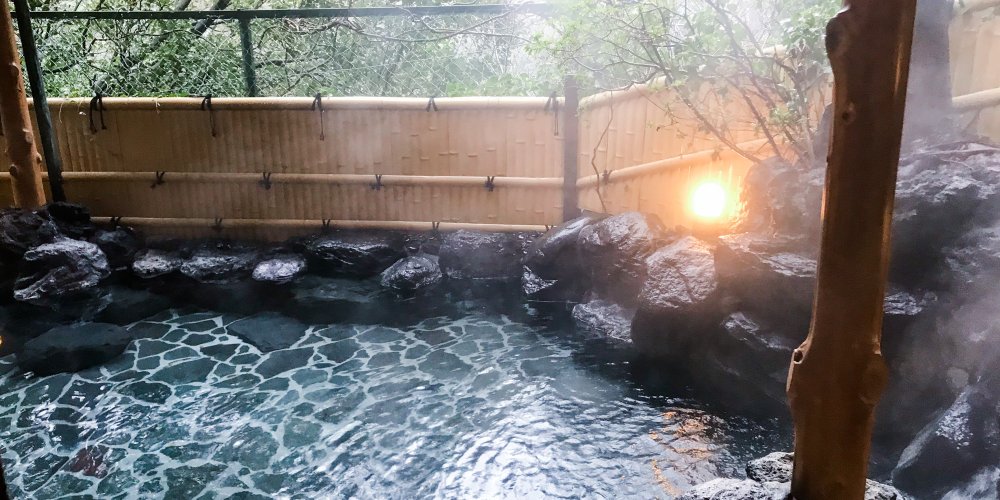 After our time in Tokyo, we headed over to the Hakone national park to stay in a traditional Japanese ryokan (aka ‘inn’).

It was right at the top of my list of things I wanted to do during our trip to Japan, and I’m so glad we did it! It was amazing to immerse ourselves in the more traditional side of Japanese culture that also felt really luxurious, as we knew this part of the trip was where we wanted to spend a bit more money to make it extra special.

We stayed at the Yama-no-chaya ryokan in Hakone, for two nights in their Special Room Asebi, which is basically like a full apartment, with your own dining room, lounge area, bathroom, bedroom, balcony with hot spring bath, and our own moon-viewing deck too! The floors were tatami mats, we slept on (incredibly comfortable!) futons, and had dinner on the classic low dining table sat at the floor. It definitely was very special. 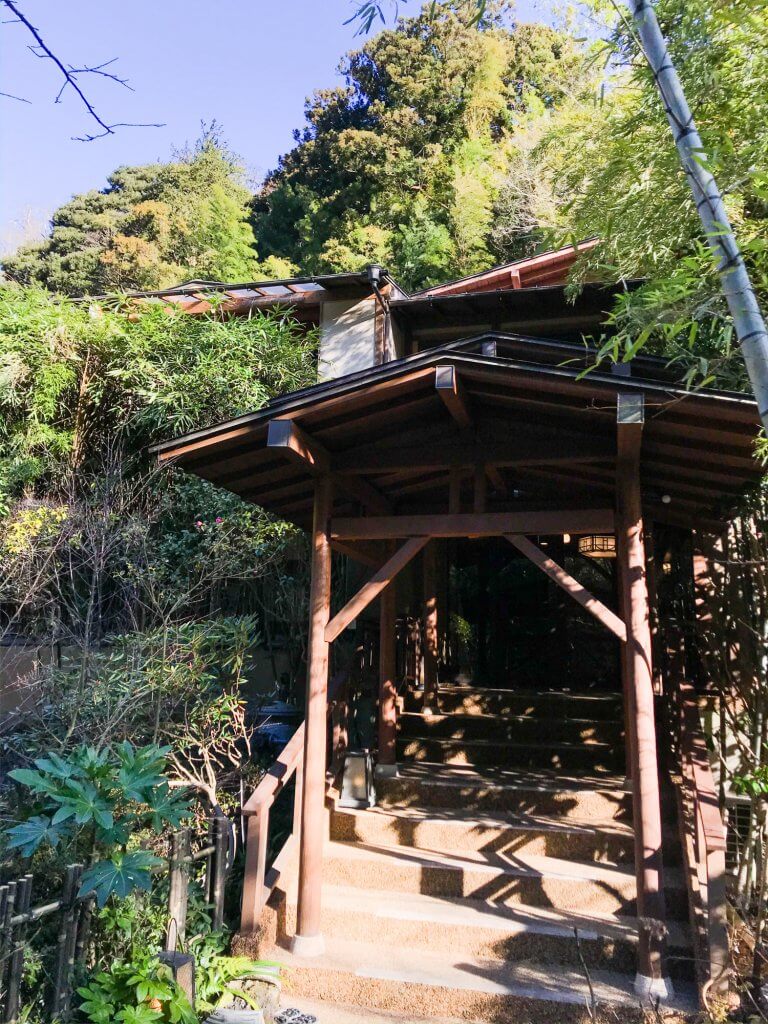 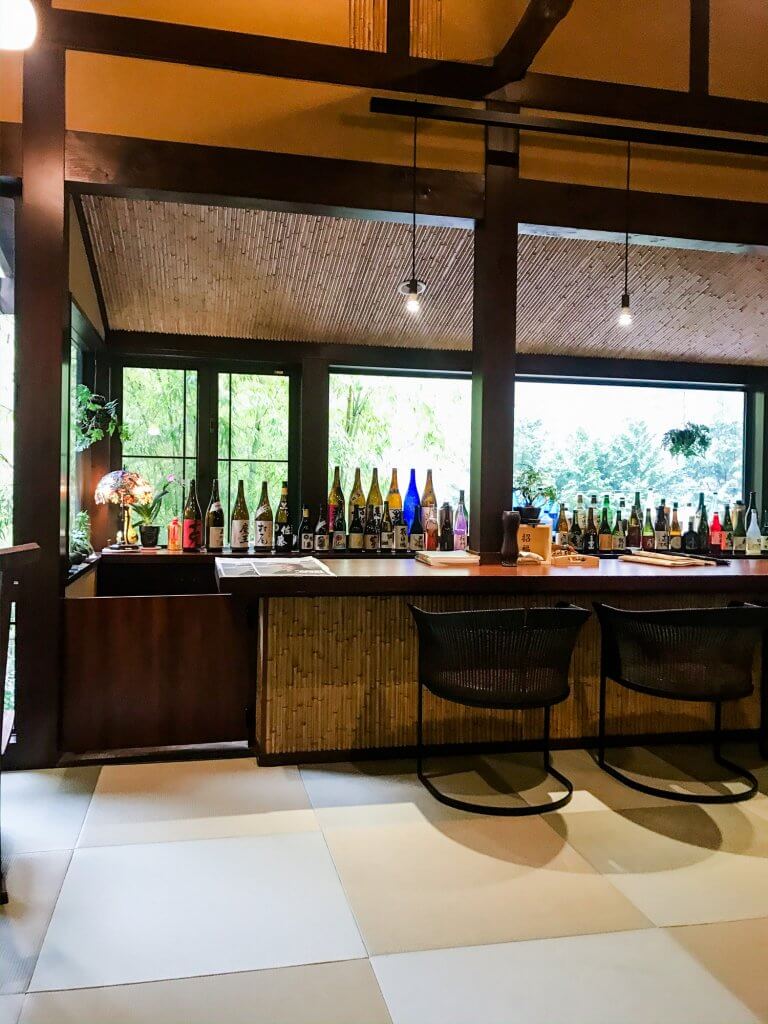 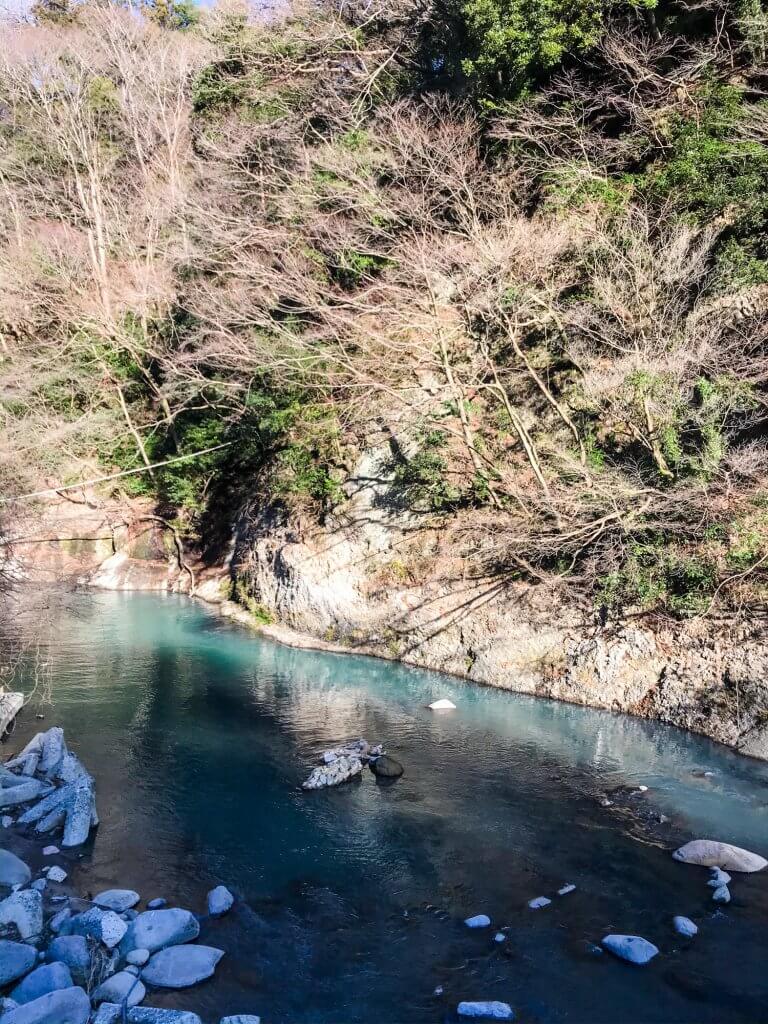 The Hakone national park is known for two things, really – the first being a beautiful place to glimpse views of Mount Fuji, and the second being the natural hot springs (onsen) that are fed from the active volcanoes in this area (in case you didn’t know, as well as being Japan’s tallest peak, Mount Fuji is in fact an active volcano!).

Dotted around the area are loads of public onsen and ryokan/hotels that have their own onsen to bathe in, and our ryokan had a few to choose from (as well as our own private one on our balcony too!). Unless stated, onsen are usually public, split sex (separate male and female baths), and you must always go nude. Tattoos are usually also not allowed. So for body-shy westerners like us (and me with all my tattoos!), we deliberately chose a ryokan that had a dedicated private onsen, that guests can book our for an hour’s slot to use on their own. So you can go as a couple and not worry about anyone else seeing you! 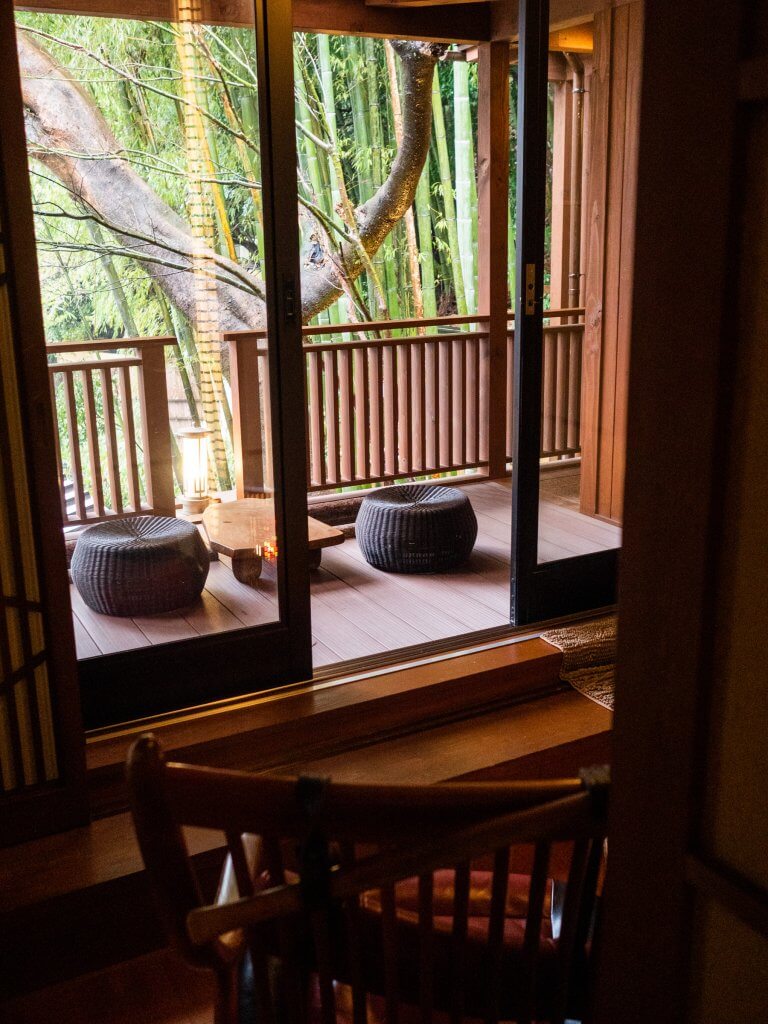 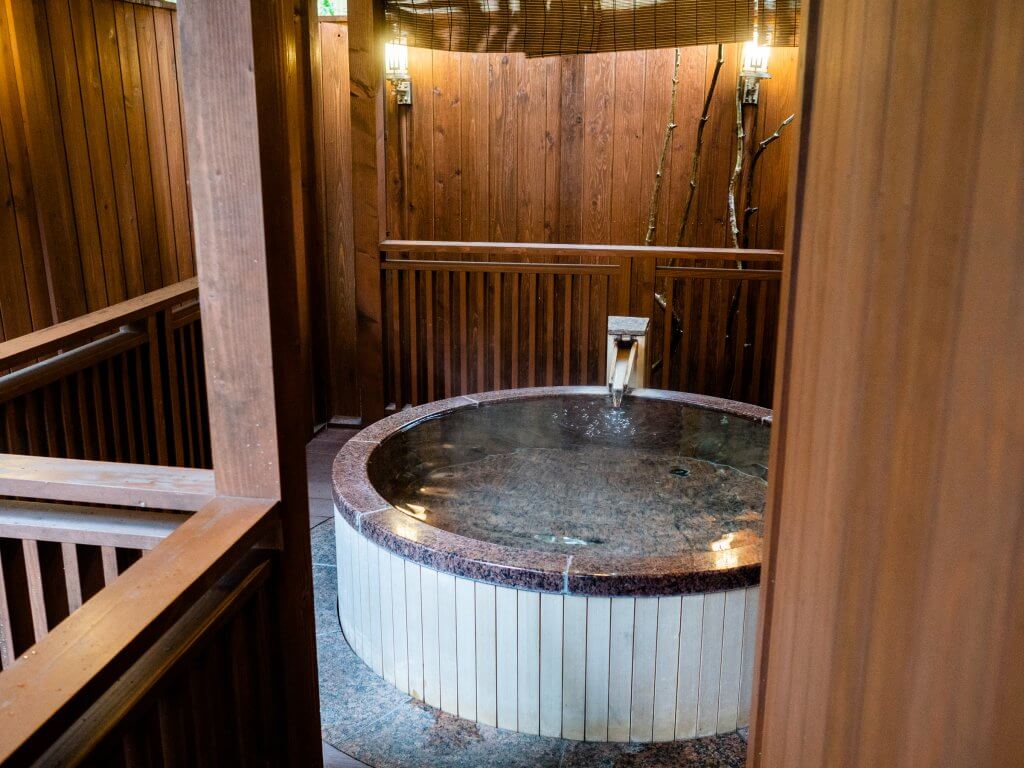 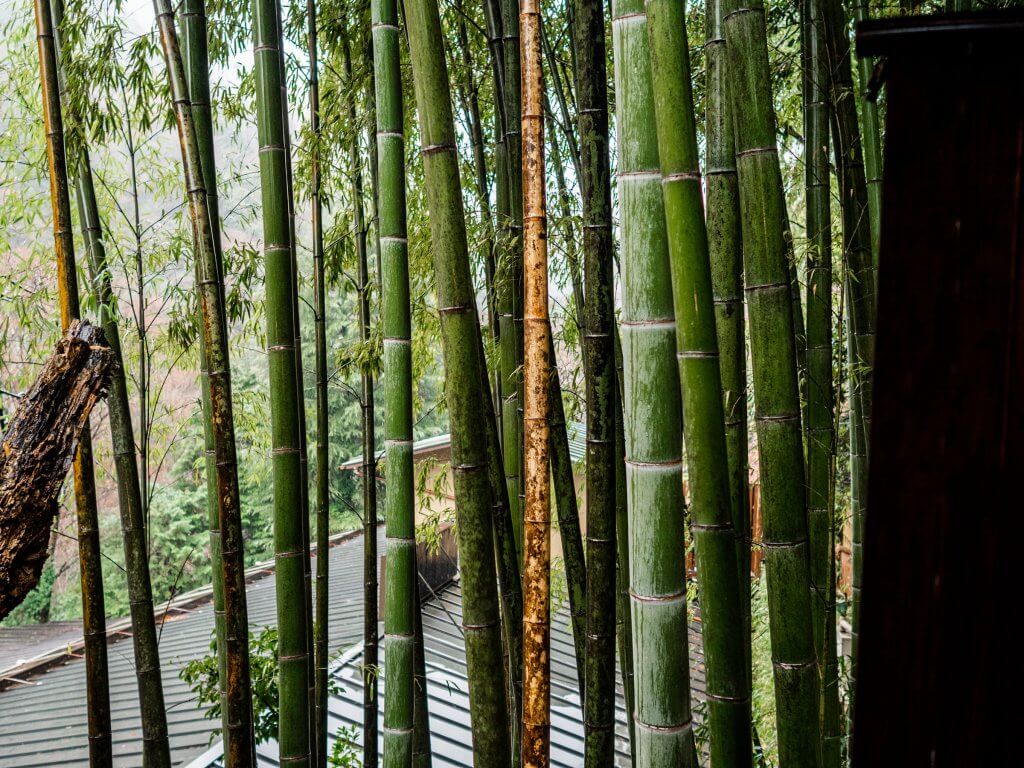 Once we’d arrived at our ryokan, crossing a suspension bridge over the river to get there and taking our shoes off at the inn entrance, we were shown to our room and set up with tea and a snack at our dining table, while one of the staff booked us in for our private onsen slot and showed us how to put on our yukata (a light, casual kimono to be worn around the house/ryokan – kind of like a bathrobe). 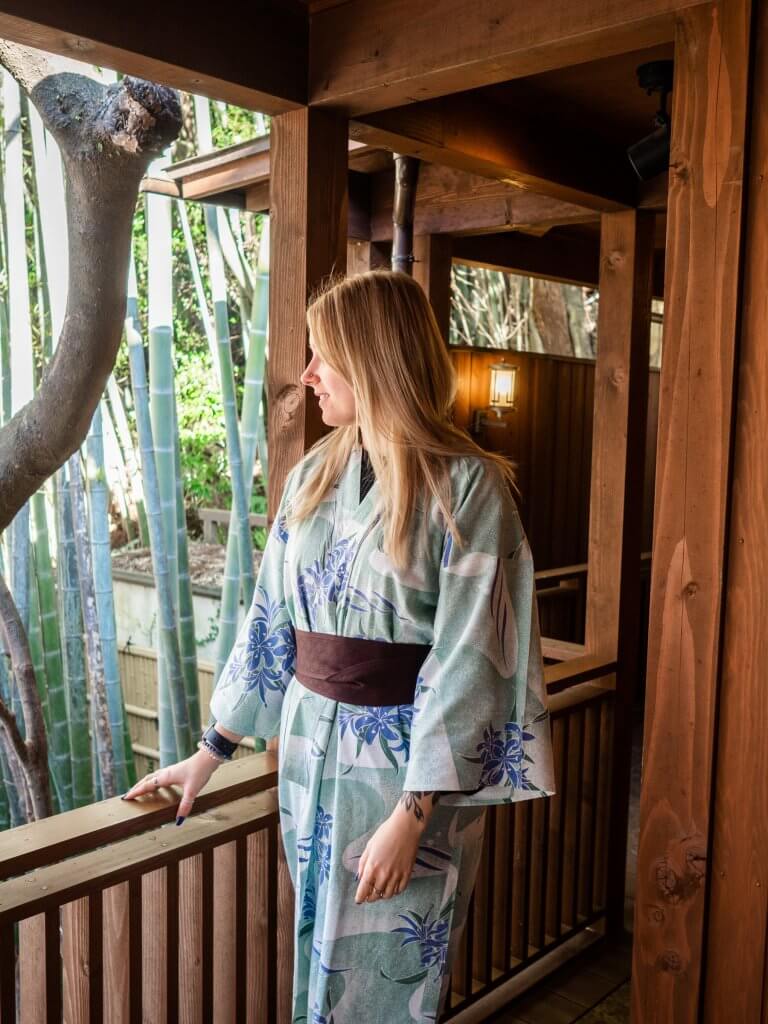 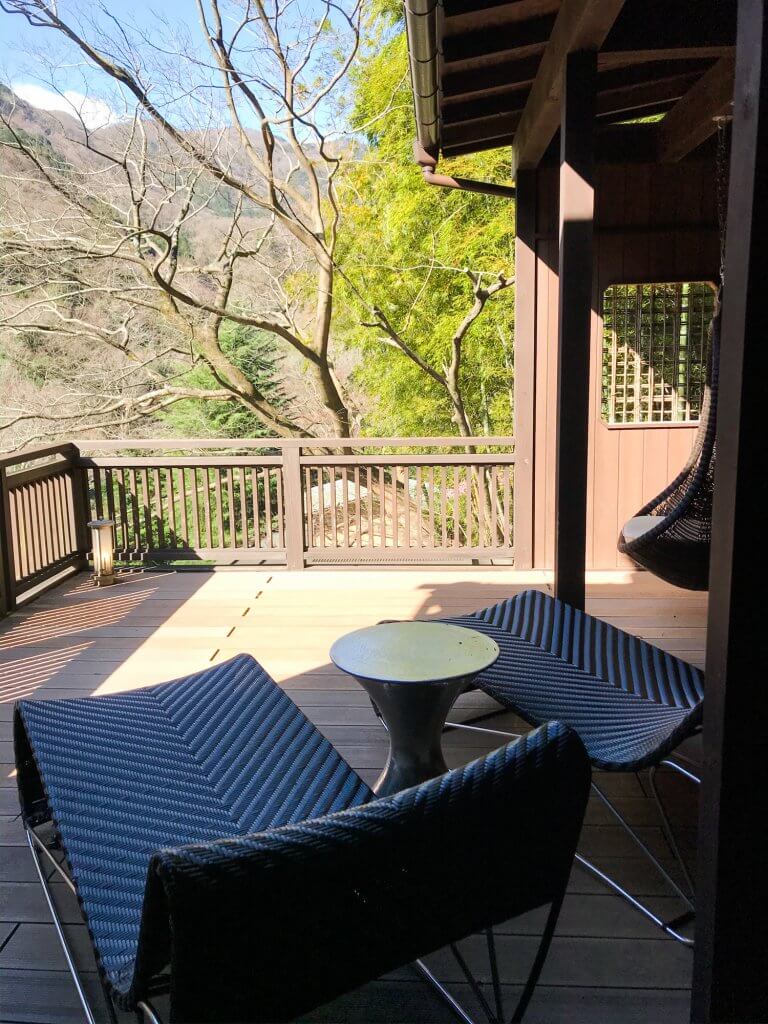 The staff were also very helpful in explaining to use how the onsen should be used, as it’s not quite the same as just slipping into a hot tub. At their core, onsen are essentially public baths, which means people used to (and still do) use them to wash themselves; so there will always be some kind of shower/water source outside of the bath where you’re supposed to rinse off first, then go into the bath to soak, then get up to finish washing yourself & your hair etc., and then go back to soak once more. And when you’re washing yourself you should always be sat down on the little stools provided. 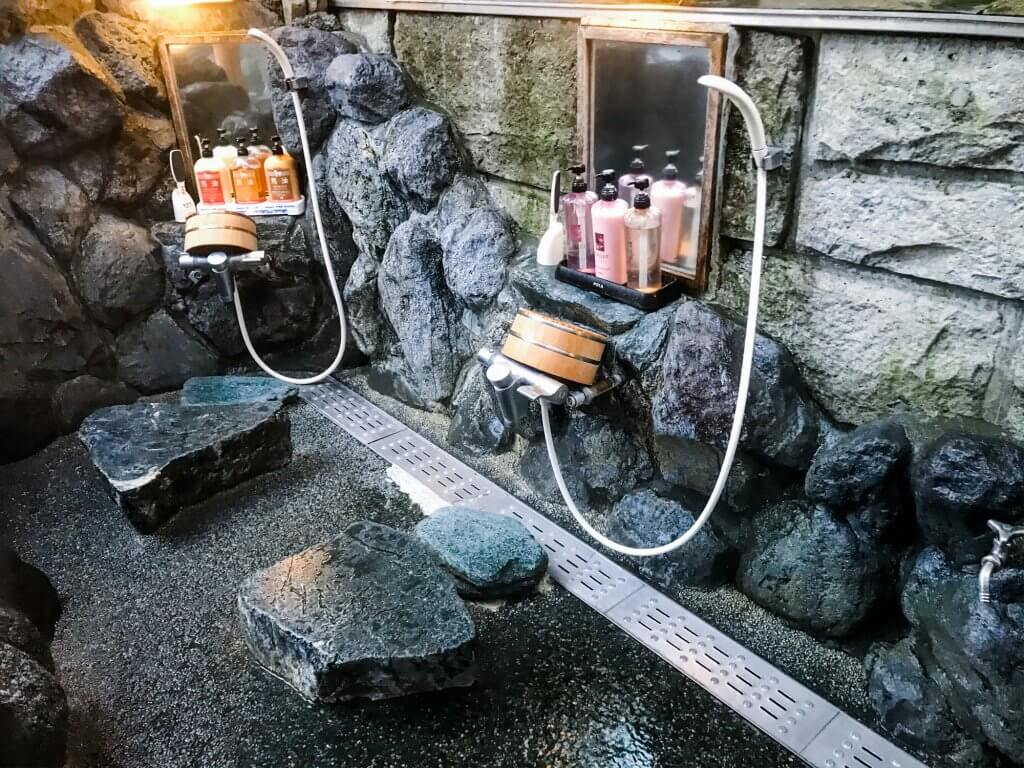 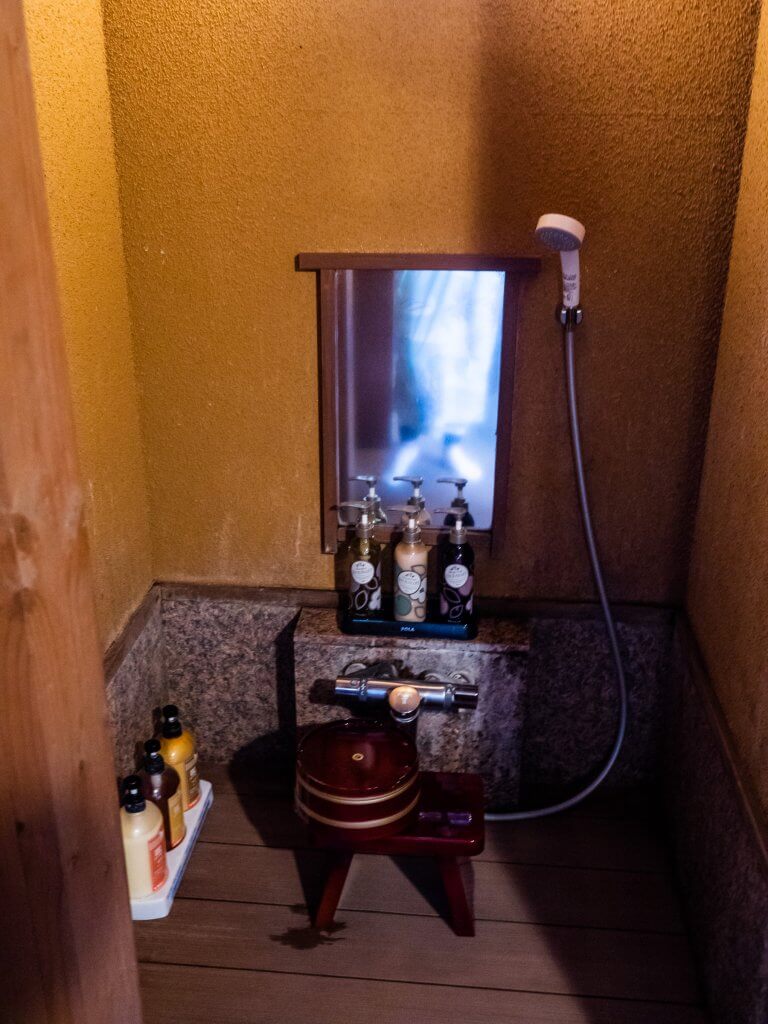 This was also the same in our room (we only had an outside shower & bath in this style, nothing else – although the shower was covered) and also in our machiya (self catered townhouse) that we stayed in in Kyoto after Hakone, and in our hotel in Osaka too – although the bath and shower there were indoors in a kind of wet room. So this seems to be the ‘done way’ of how to wash in Japan! 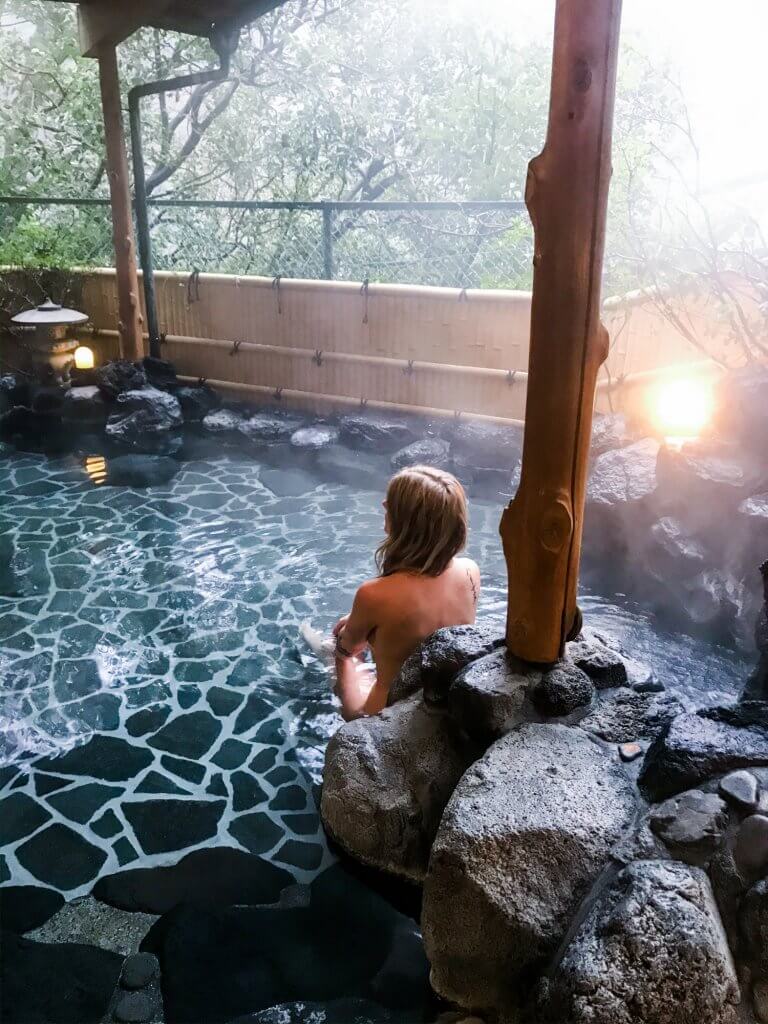 All the different bathing rooms in our ryokan were different, with the private book-able one looking like a beautiful, tranquil outdoor pond almost! This was our first time experiencing the hot springs and they were definitely HOT. Usually around 42 degrees, which I personally quite like (I always run my baths at home SUPER hot) but Alex wasn’t so keen on it (he overheats very easily), so that’s something to bear in mind. Just make sure you drink lots and stay hydrated, and don’t stay in longer than 15 minutes at one time (although it was quite hard to do that due to the heat to be honest!).

The bath in our room was the same temperature, but you can always ask the staff to turn it down by adding more cold water at the source. 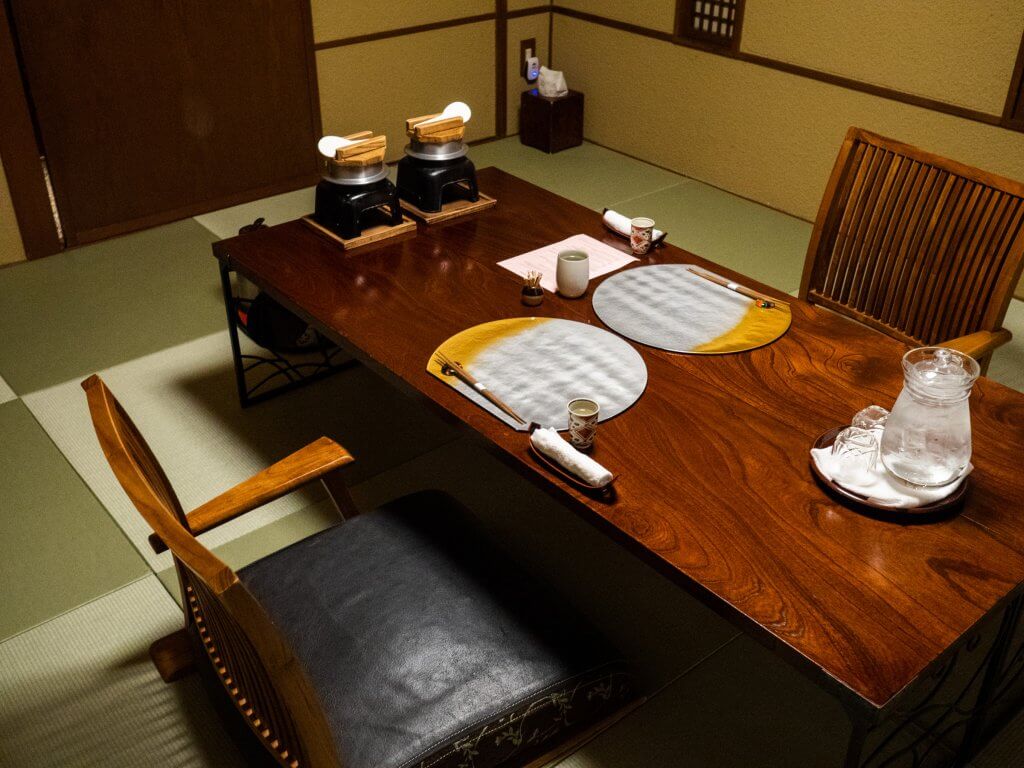 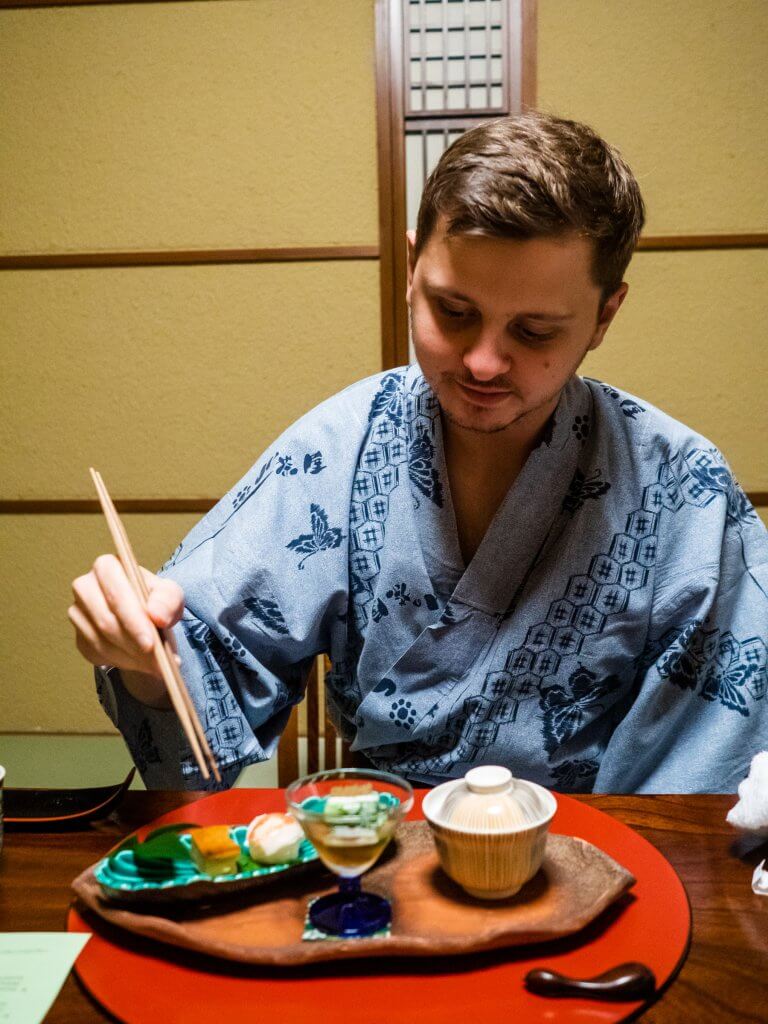 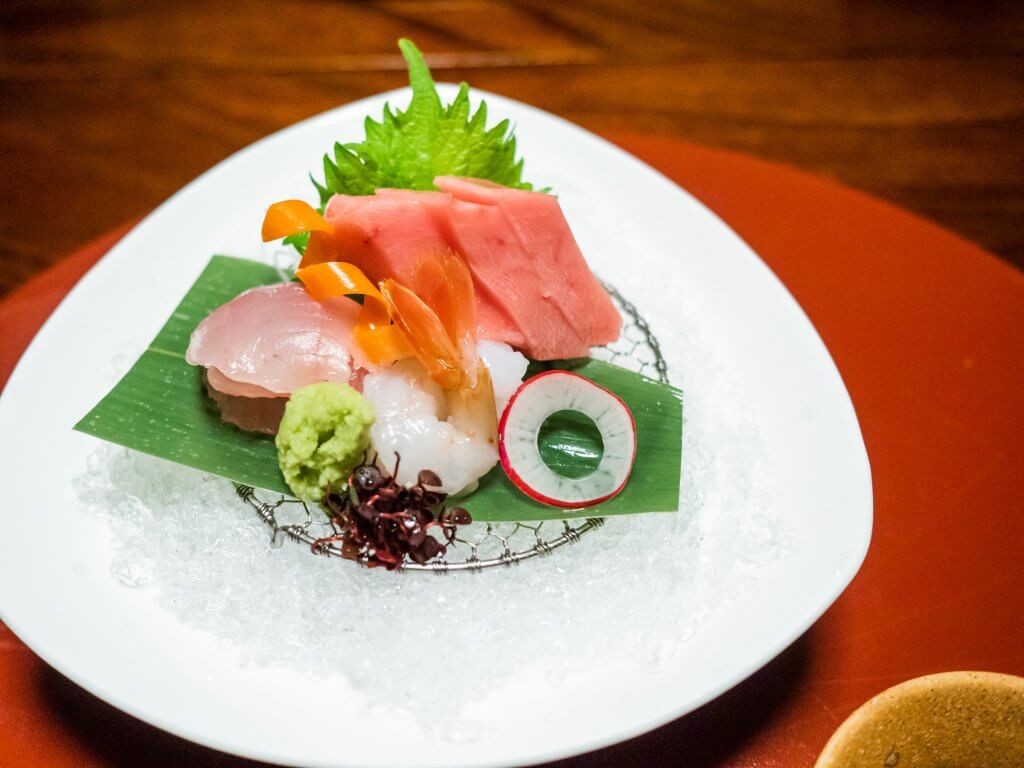 One of the big draws to staying in this ryokan was the cuisine that came with it; each evening we were served an 8 course dinner in our room of basically the equivalent of Japanese fine dining. Both evenings we were there was a slightly different menu, and although it was loosely translated into English for us, there were a LOT of things on there that we had no idea what we were eating… 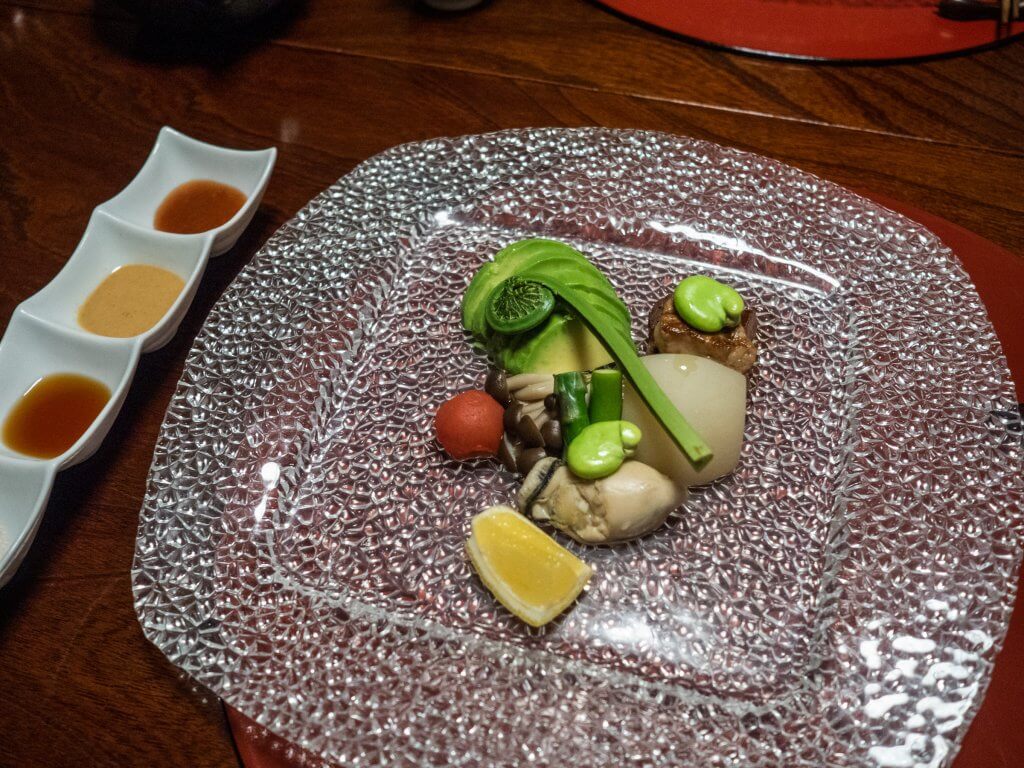 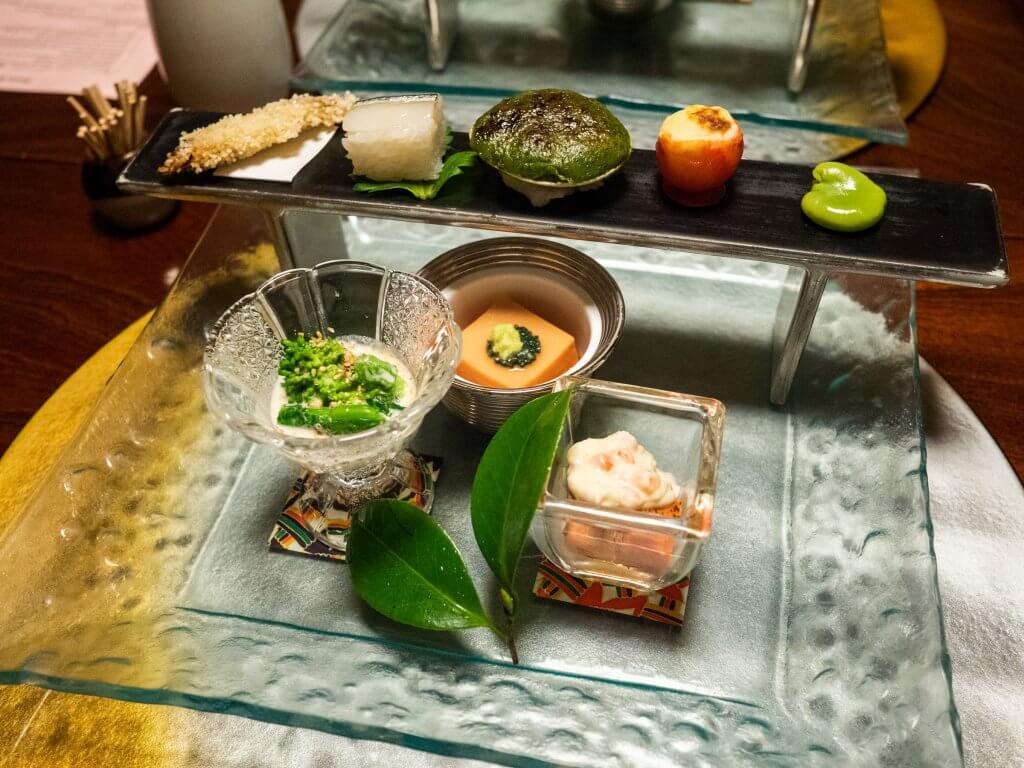 It’s safe to say we were both definitely pushed to the limits of what we could put our palates through; most of it was delicious but some things just weren’t for our western tastes. We LOVE Japanese food in general, especially sushi & sashimi, but some of the more adventurous things (think raw eels and mushrooms, pickled vegetables etc.) we probably wouldn’t try again.

And then there was breakfast. 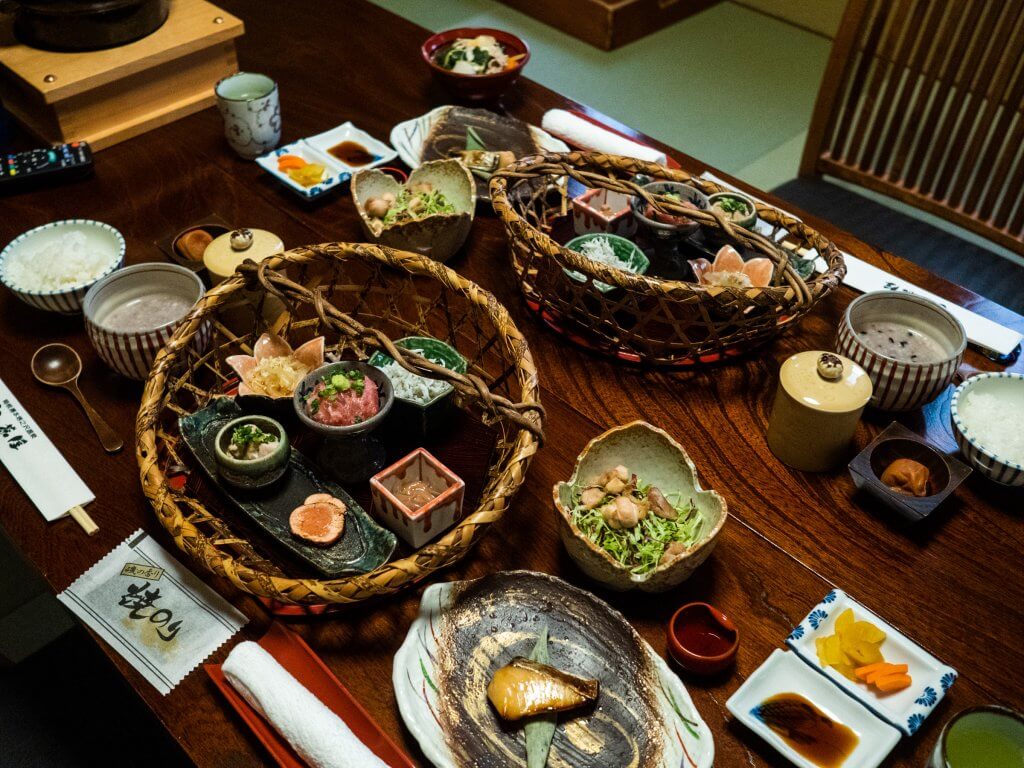 In Japan it seems like they don’t really eat a ‘breakfast’ as such – it’s just another meal where they eat things like soup, rice, fish etc. Don’t get me wrong; that’s a super healthy way to live! And I know the concept of breakfast (eggs, toast, cereals, smoothies etc) is really a western construct, but as someone who usually just has a handful of fruit in the mornings, this enormous feast was a shock to the senses! 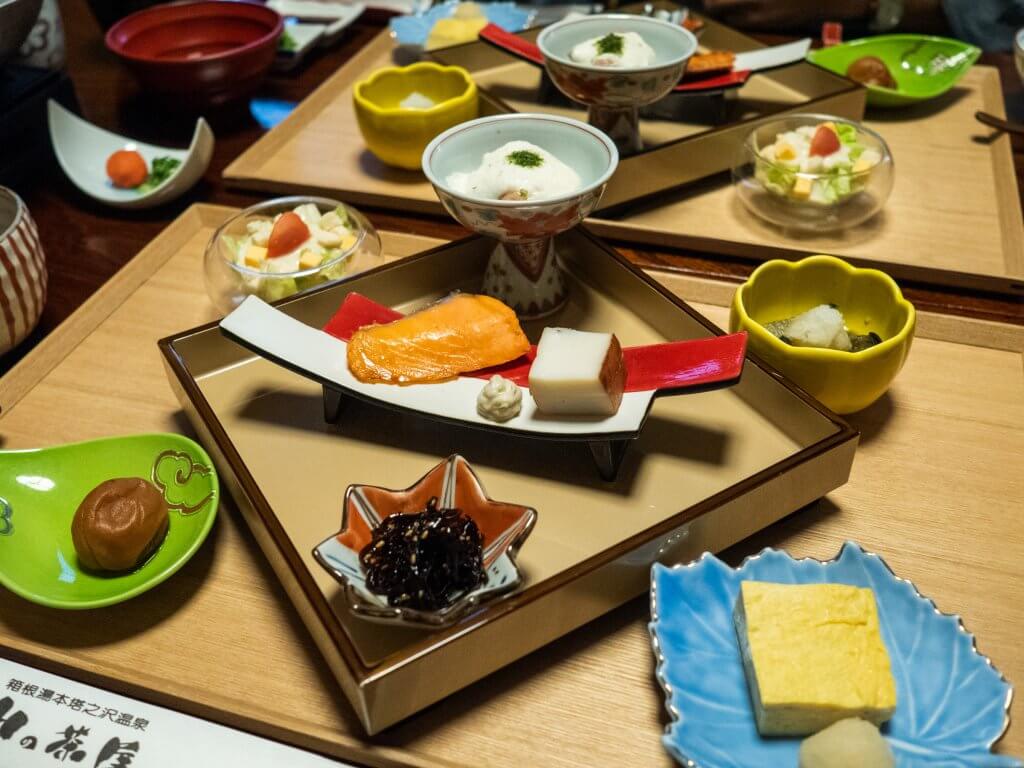 One of the most useful things to have while we were staying in Hakone was our ‘Hakone Free Passes’; essentially a ticket that we could use on pretty much any of the public transport (trains, buses, trams, cable cars – even the boat that goes across the lake!) in the park. It made it so much easier than buying separate tickets for different journeys around, and the park is HUGE so you definitely need to use the transport. 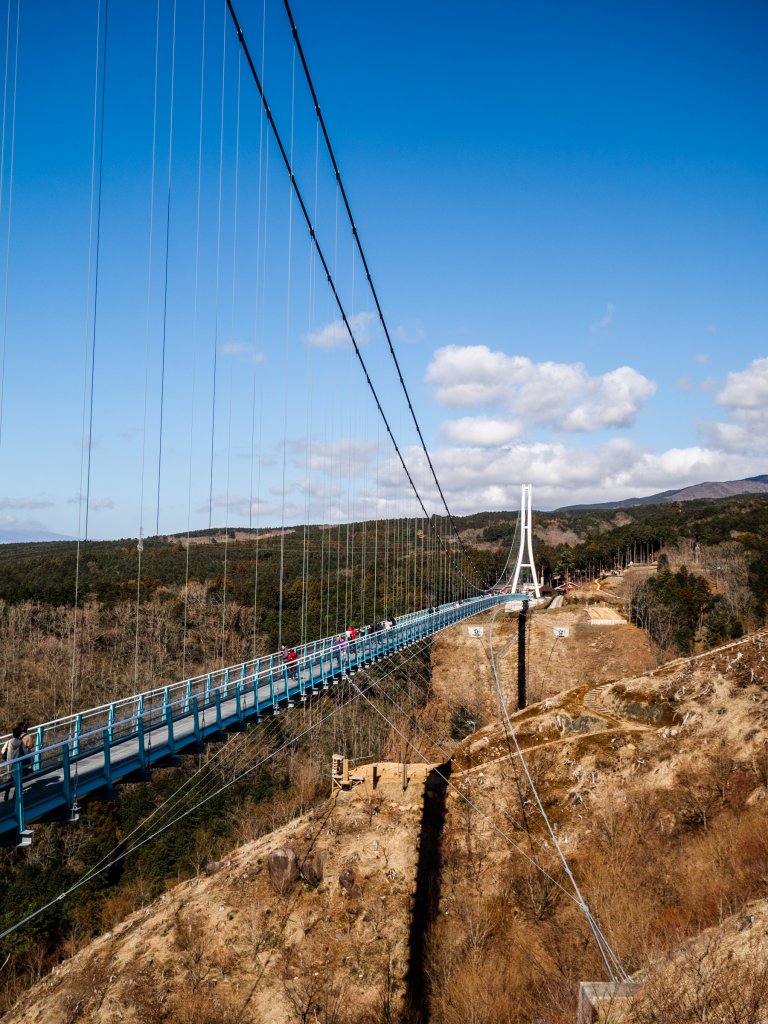 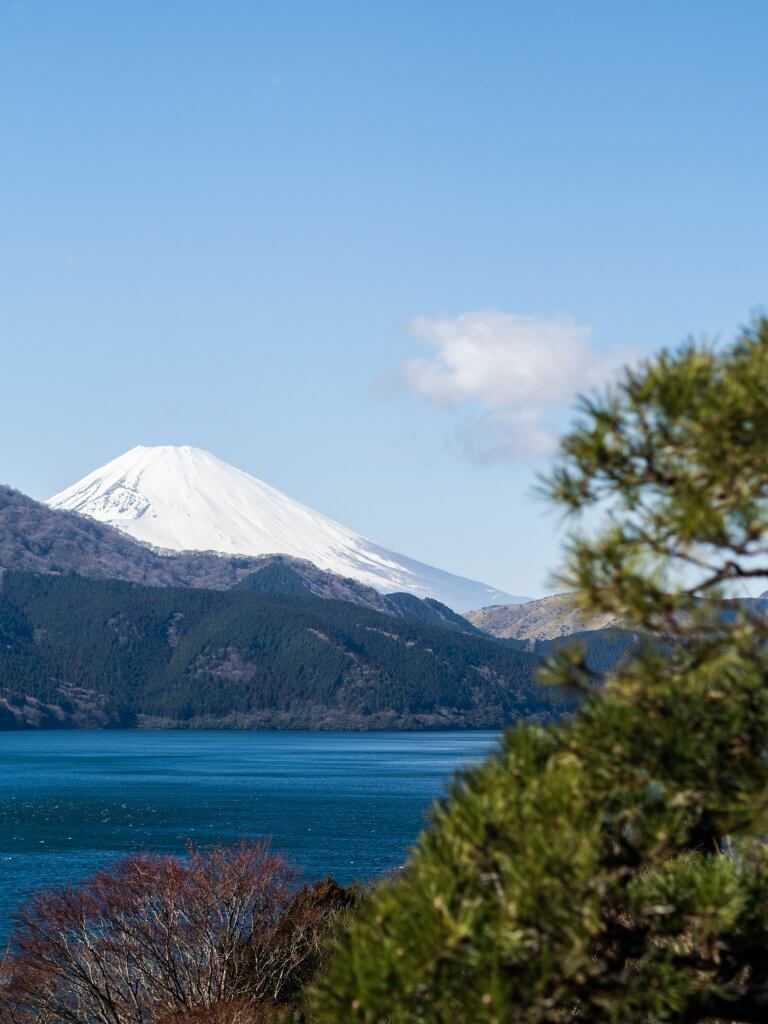 It was a beautiful sunny day during our time exploring here, but unfortunately it was extremely windy! This meant that the two things we’d been really excited to do (the boat trip across Lake Ashi and the cable car/ropeway that goes across a volcanic valley) were both cancelled that day. However we still had a great time hiking around the park, getting some stunning views of Mount Fuji as we went! 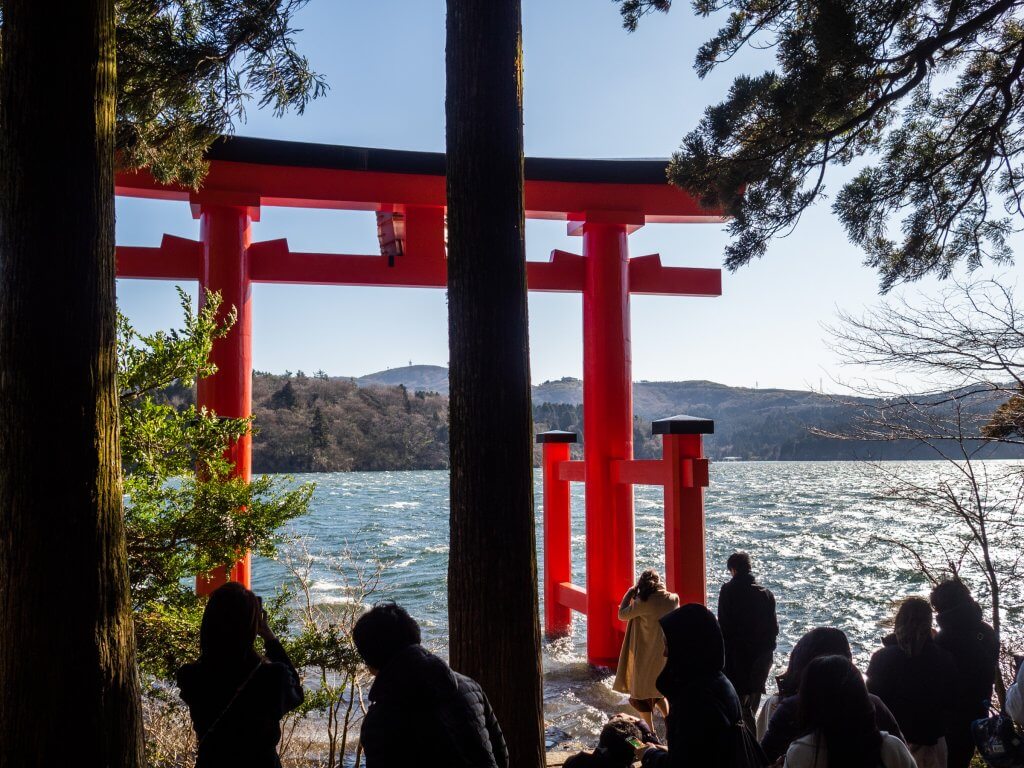 It was very hard to say goodbye to our beautiful ryokan room in such a stunning location on the Tuesday, but we were off to our next adventure – 3 nights in Kyoto! I’ll be sharing about what we got up to then very soon…

Would you stay in a Japanese Ryokan? 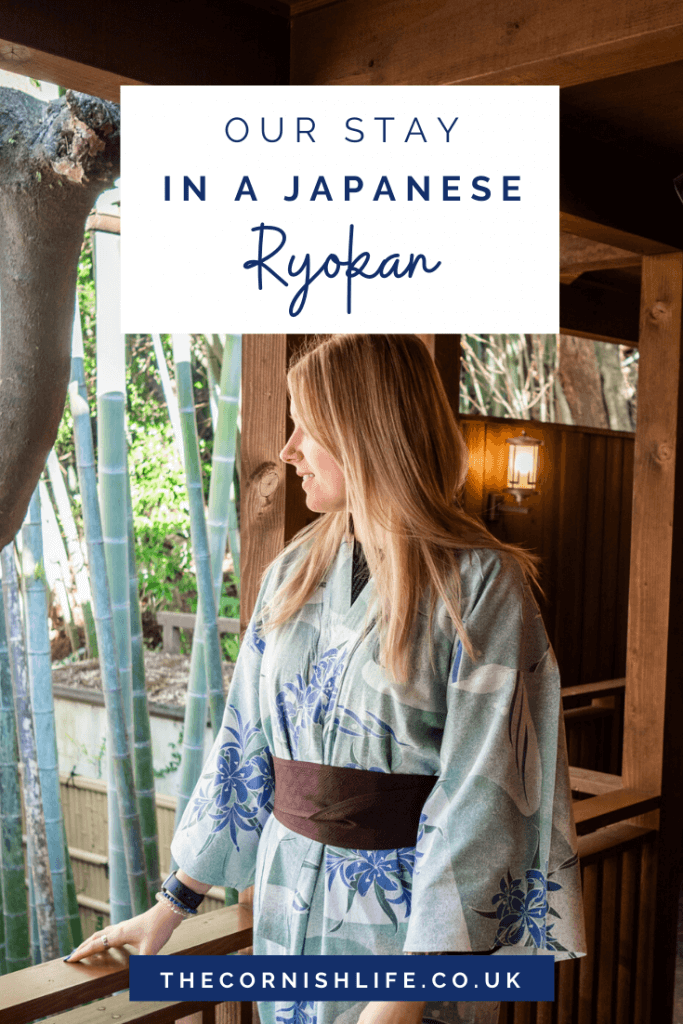