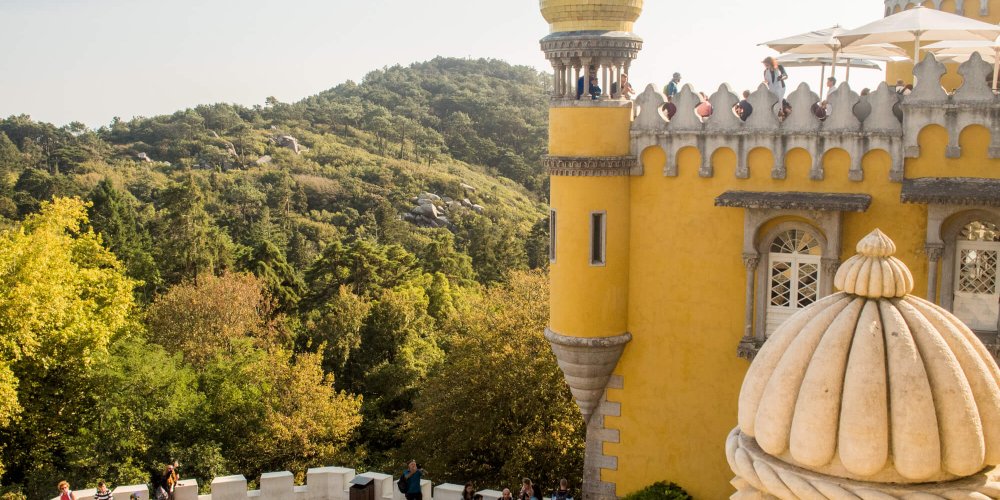 During my stay in Cascais, I headed out on a tour around Sintra on one of the days.

Everyone who had been coming in and out of the hostel kept saying to me how beautiful it was and that I must go and have a look around, so I couldn’t say no! However, after an exhausting surf session in the morning, the thought of getting a bus and navigating around myself and getting lost didn’t seem too appealing…

Luckily the hostel worked closely with a recommended tour company who picked a group of us up at around 2pm in a pair of jeeps to drive and show us to Sintra in a fun, safari fashion!

With the wind soaring past, the guides drove us to the best view points and talked us through the history of the park and palaces we’d be visiting. In Sintra, there are several palaces to explore, as well as beautiful landscaped gardens and wilderness too. 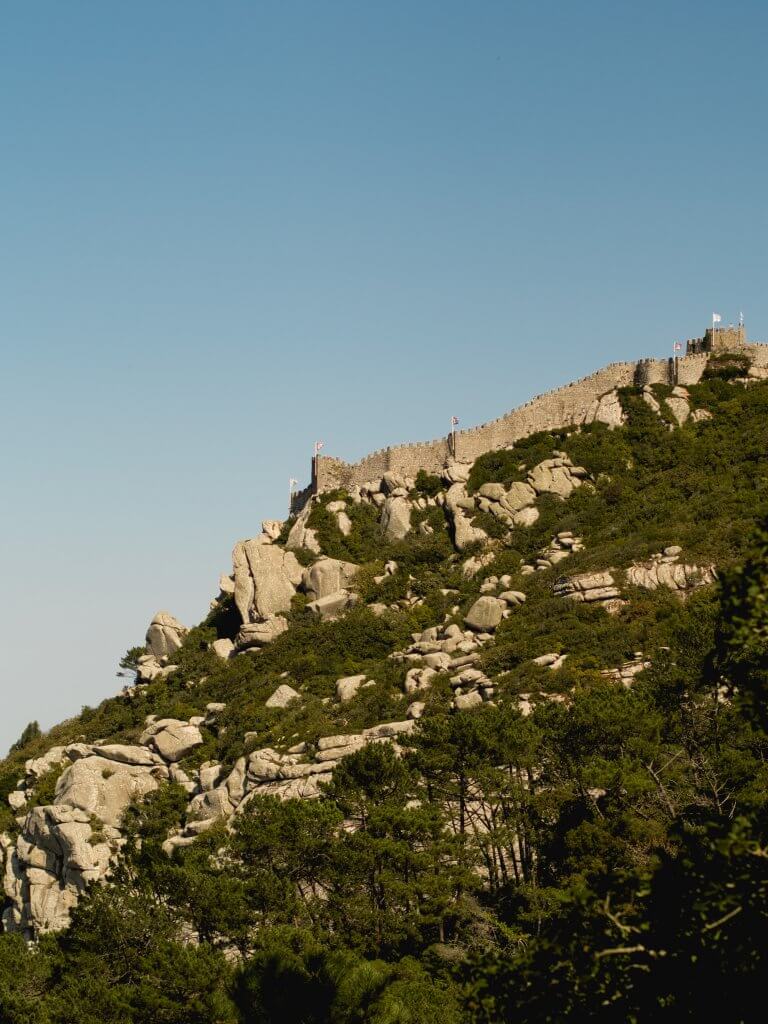 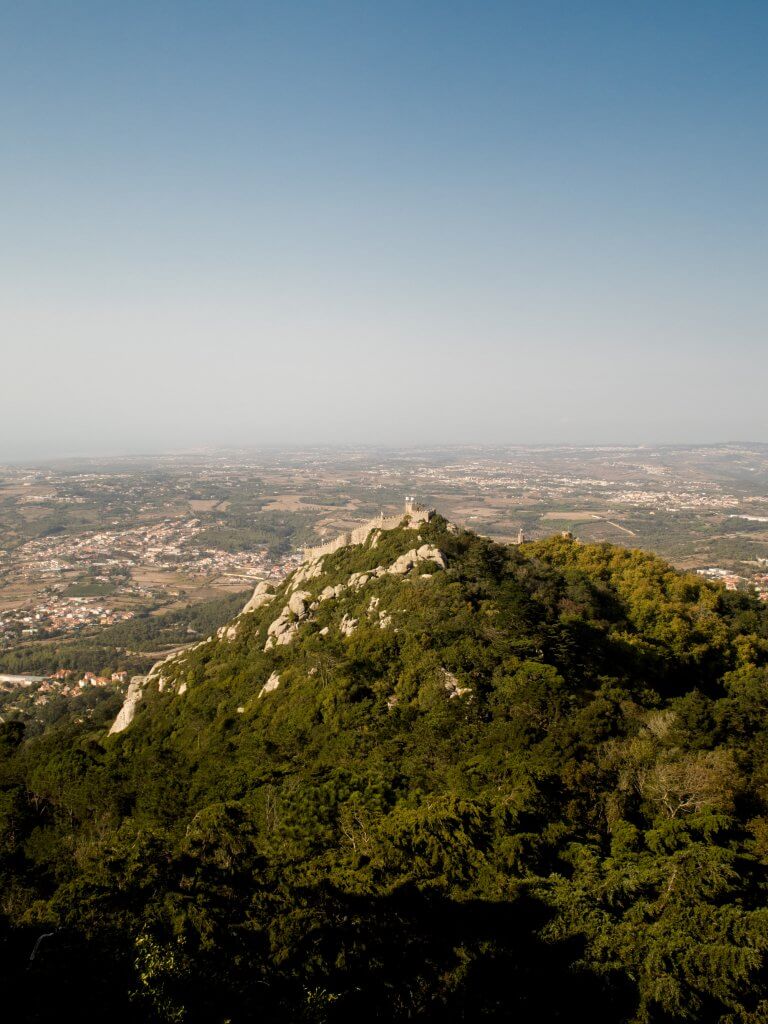 During our drive up the mountain, we stopped to admire the Moorish castle (Castelo dos Mouros); built in the 8th century this castle is the oldest of the bunch, and is mostly overgrown ruins now – but it looks very impressive with its views across the Atlantic ocean! 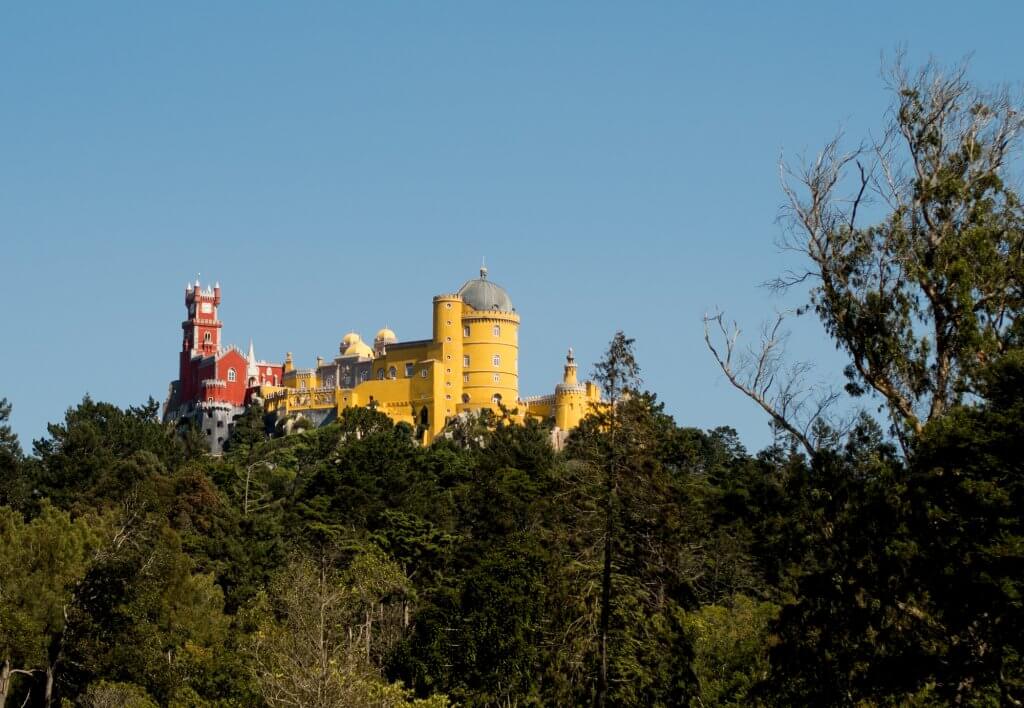 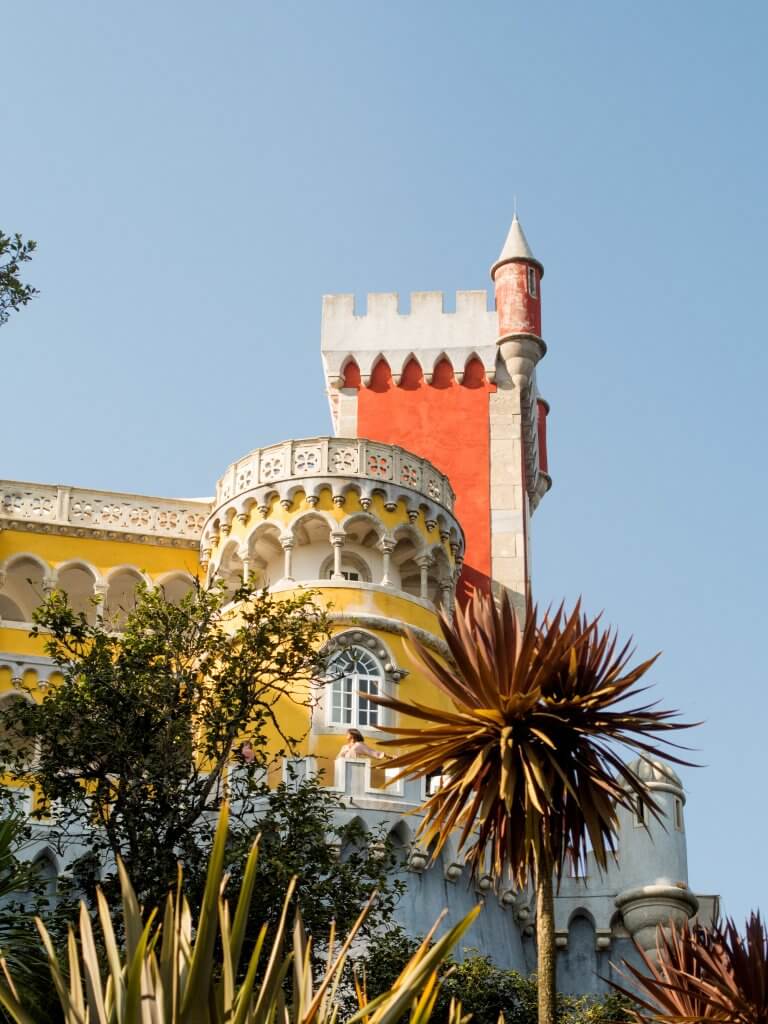 The main attraction and Sintra’s most popular icon is the Pena Palace; a huge colourful piece of Romanticism architecture surrounded by lush gardens and lakes that you can explore before climbing the hill and walking around the courtyards and turrets of the palace itself. The views from up there are incredible! 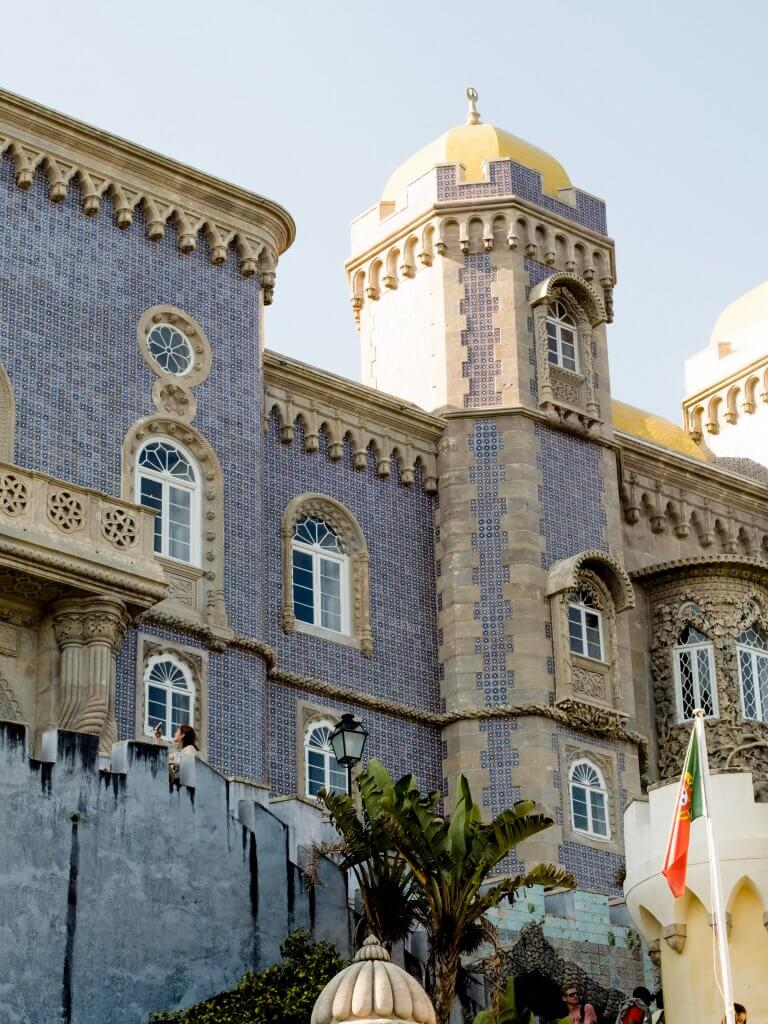 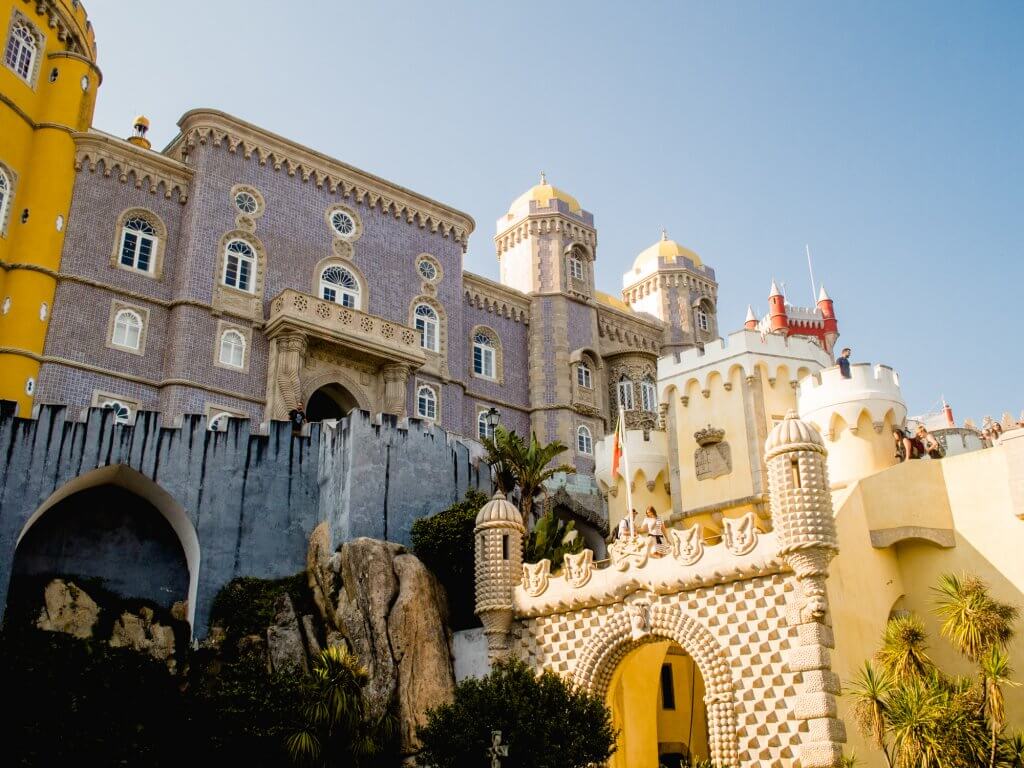 The colours are amazingly bright, like much of Portugal’s architecture, and a lot of the outside walls are also decorated in traditional tile-work too, giving the palace the impression of a gaudy patchwork quilt. 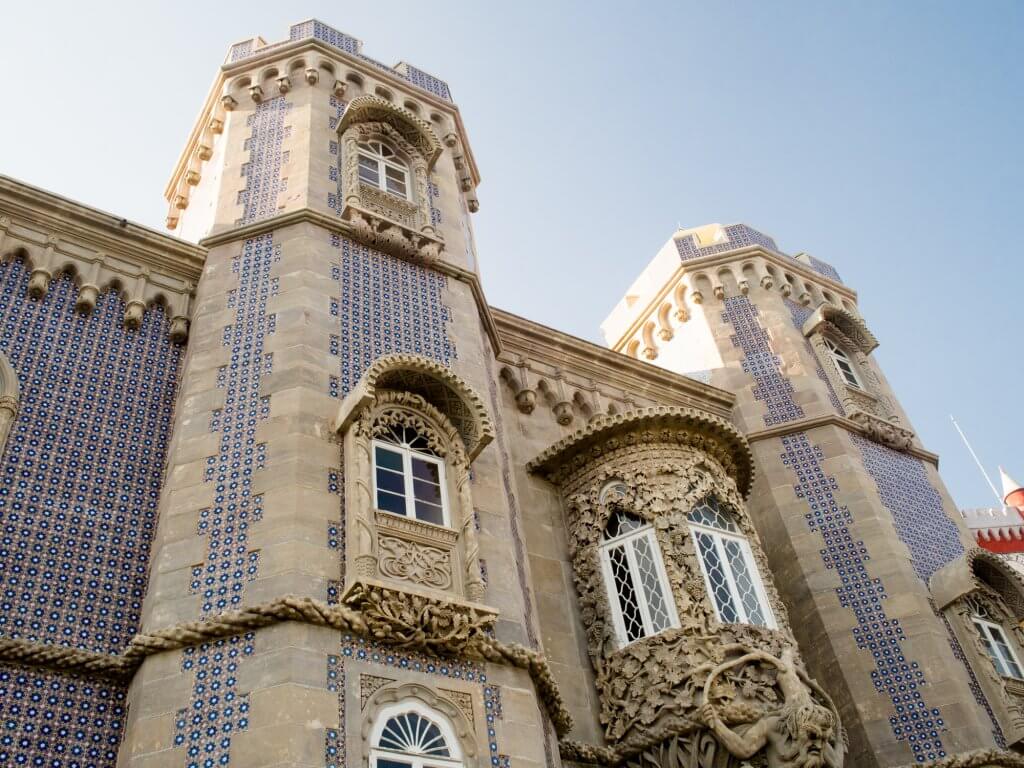 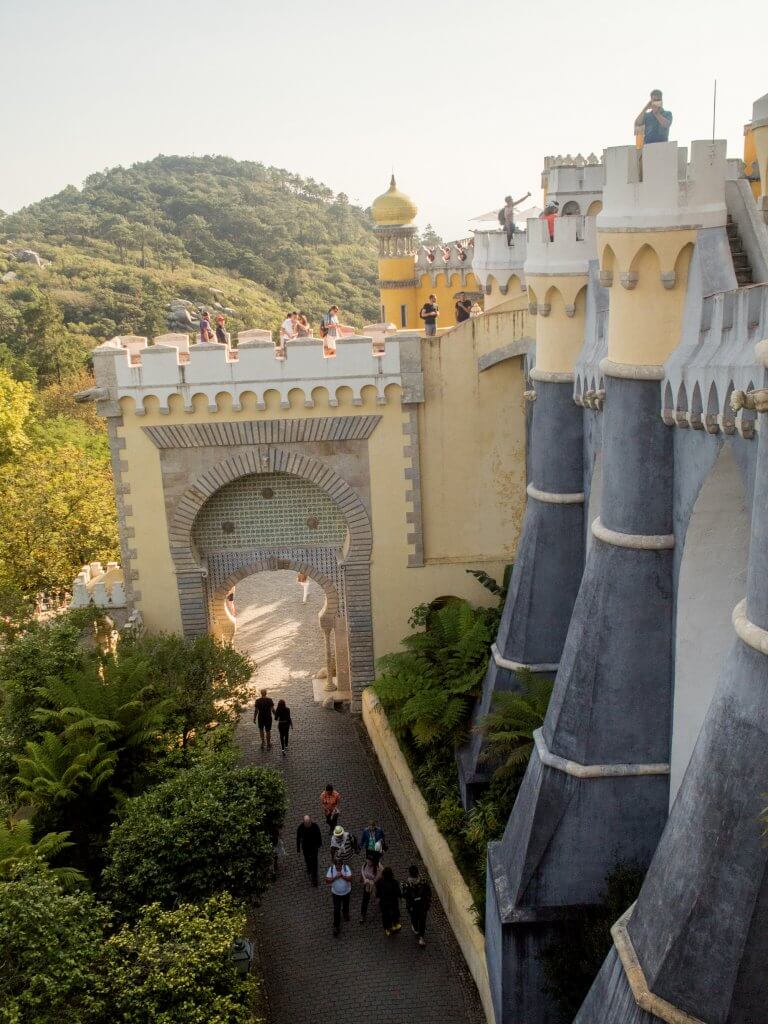 My friend and I commented as we were walking around that the structure reminded us of the palace in Shrek, and we could almost imagine Lord Farquaad trotting around the patios. 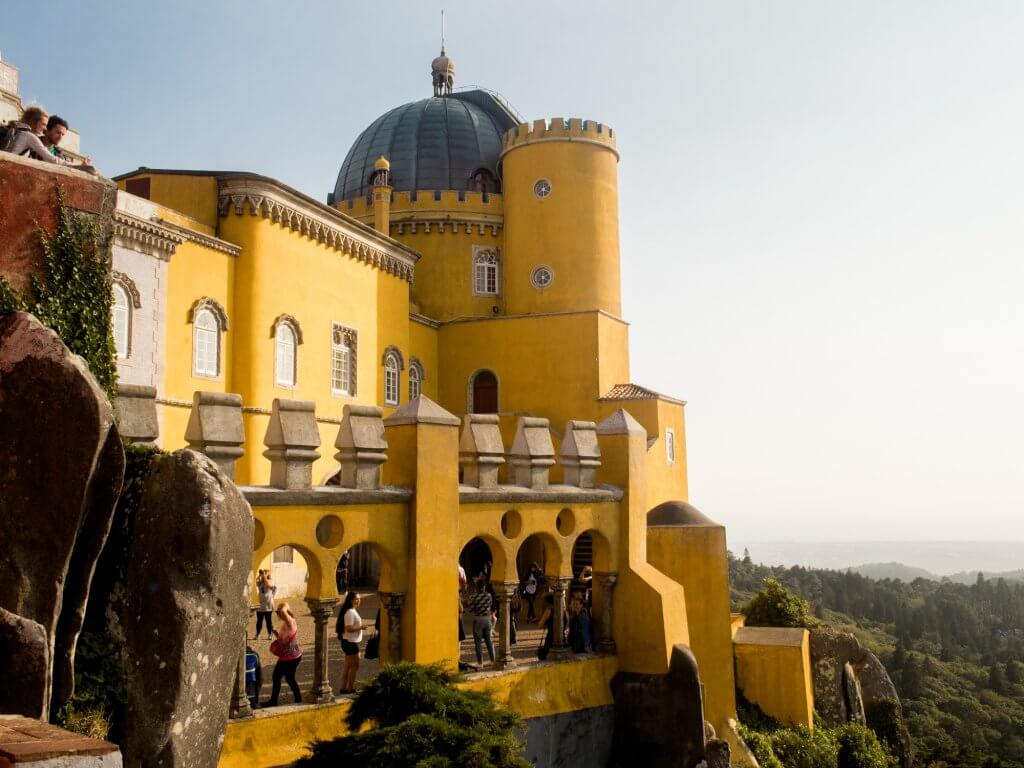 Back nearer the centre of the town, our last Sintra stop was The Quinta de Regaleira. This was by far my favourite spot during the trip, and our tour guides agreed too! 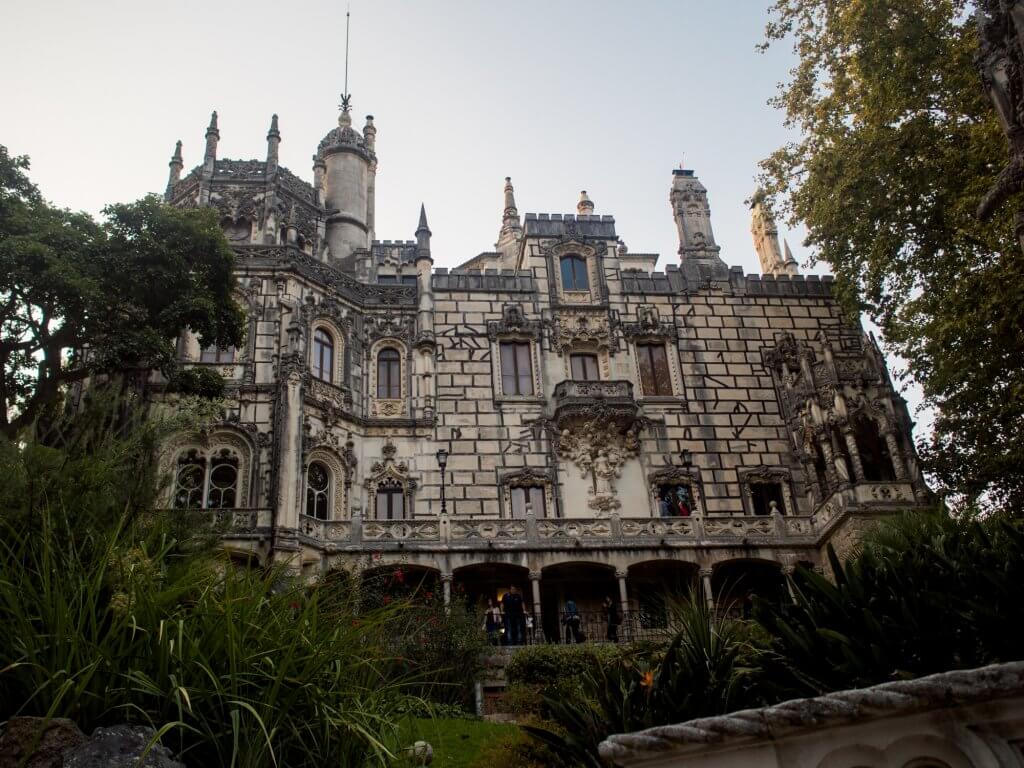 Set within a lush green jungle-like park with castle ruins and chapels around every turn, the The Quinta da Regaleira is a stately home and gardens made up of many secret tunnels, hidden courtyards and Gothic towers. 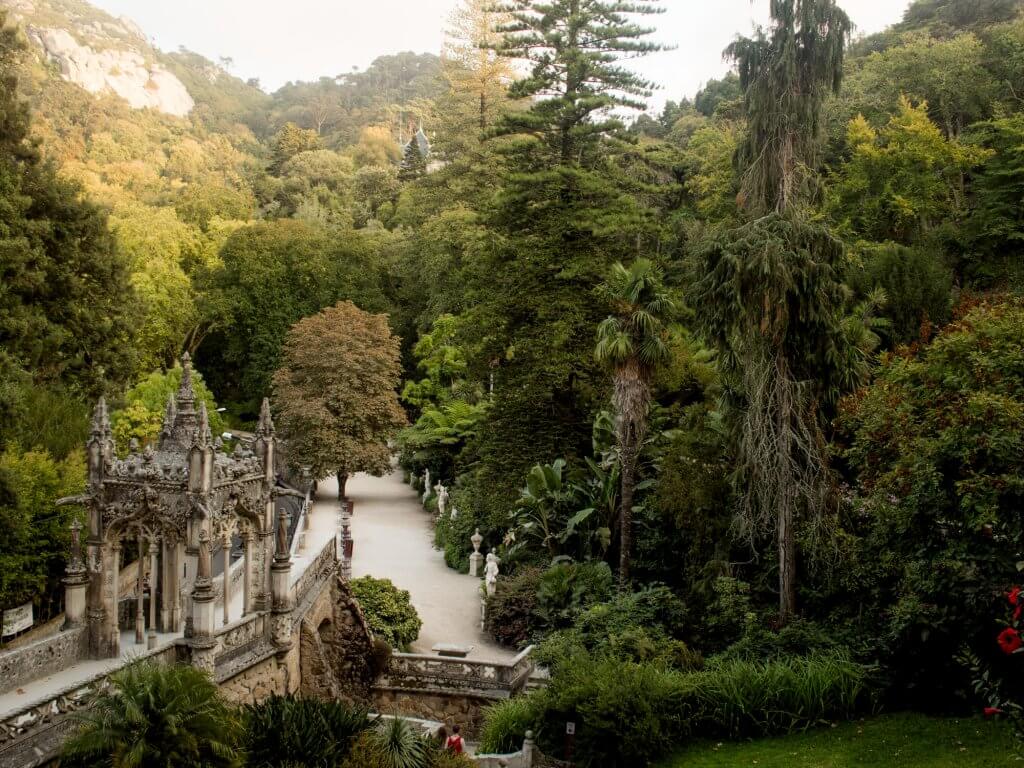 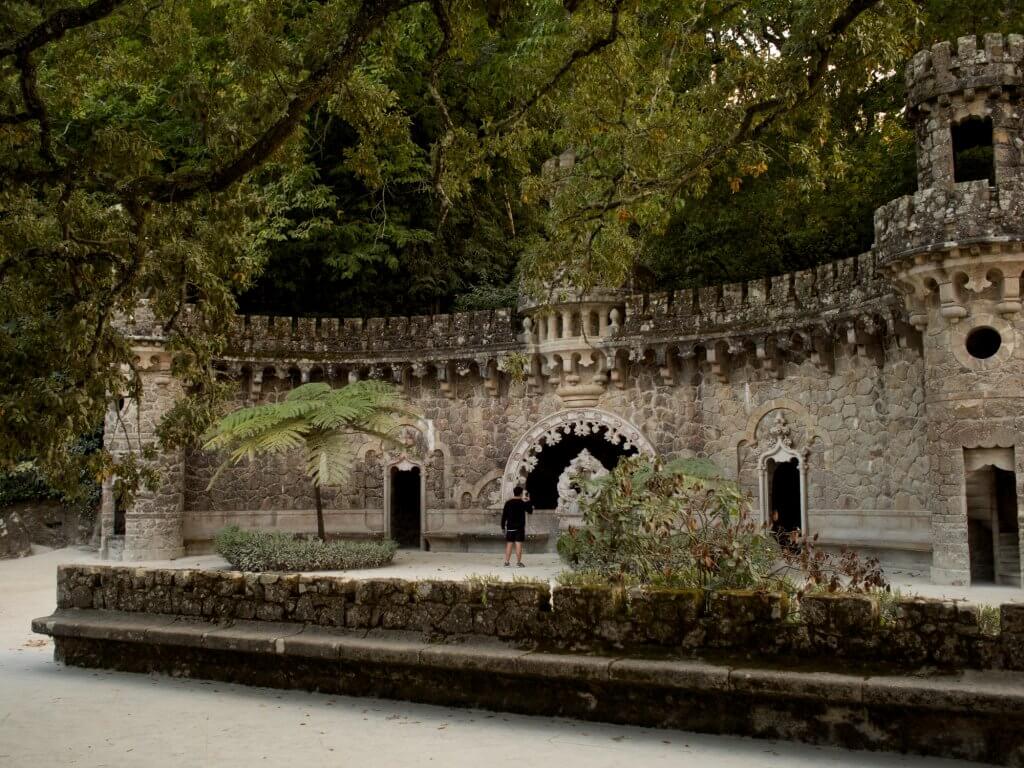 The gothic style architecture is incredible, and totally contrasts with that of the Pena Palace. It looked like we were in a totally different country, like Cambodia or somewhere like that. The whole place reminded me of the Jungle Book or Tomb Raider! 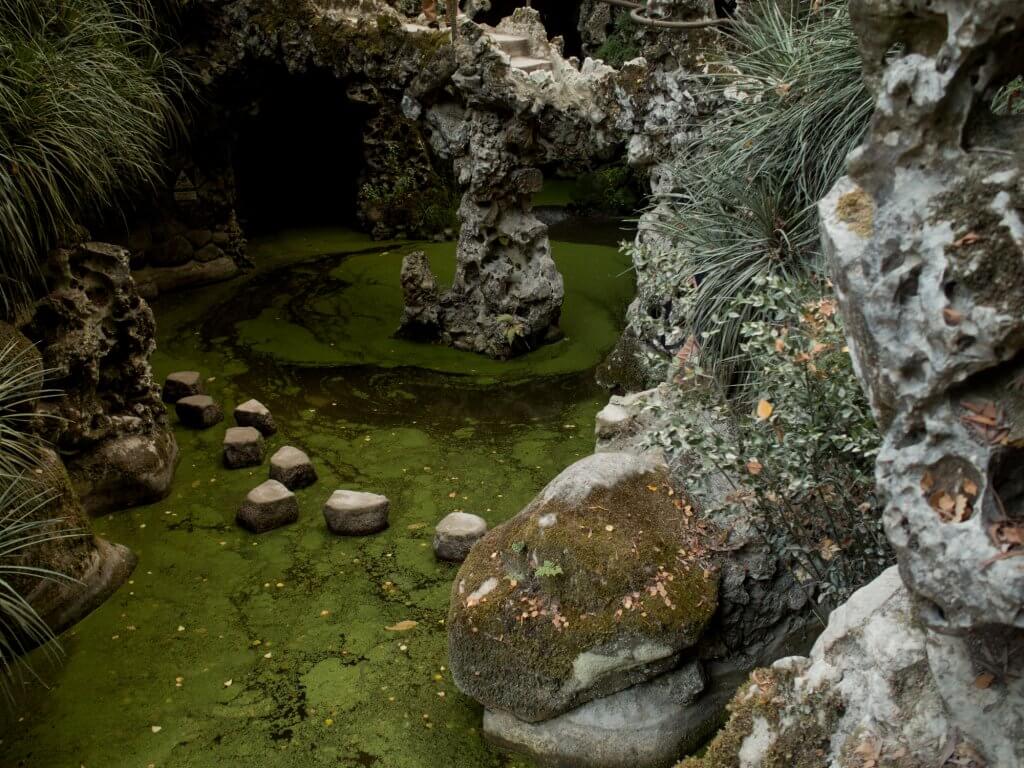 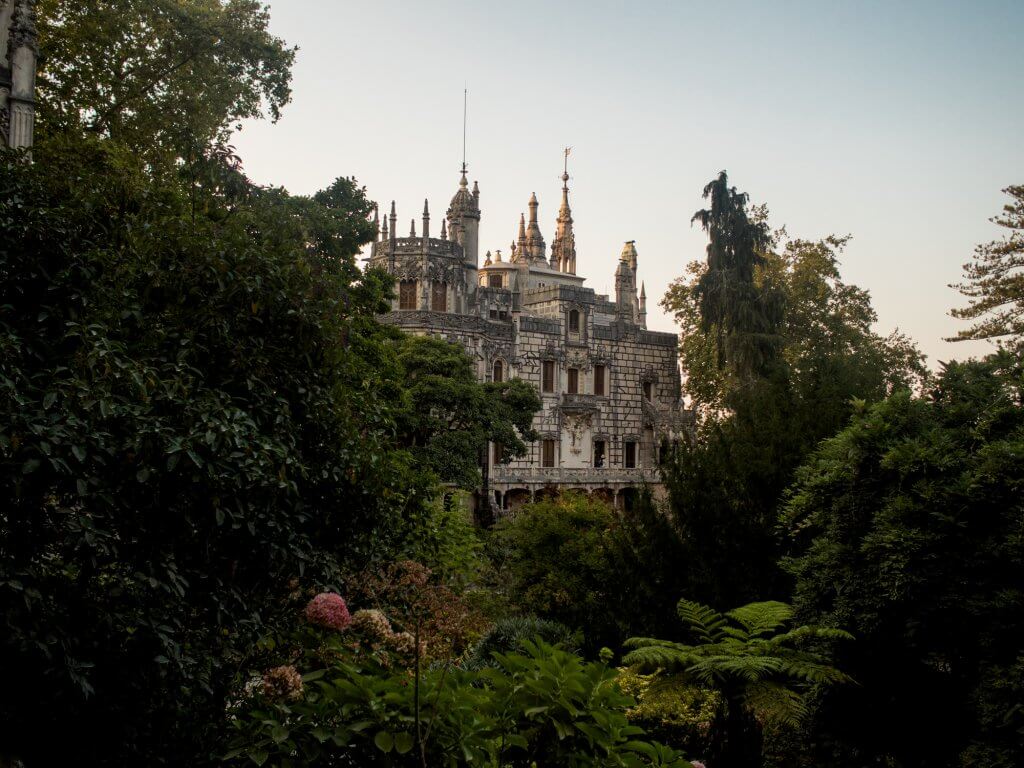 As the sun began its descent, we made a beeline out of Sintra towards the coast to catch the sunset. We were headed for a place called Cabo de Roca, which is basically a point of the coast which marks the most westerly point of Europe (marked with a cross and lighthouse that it is apparently obligatory to take a photo of!). 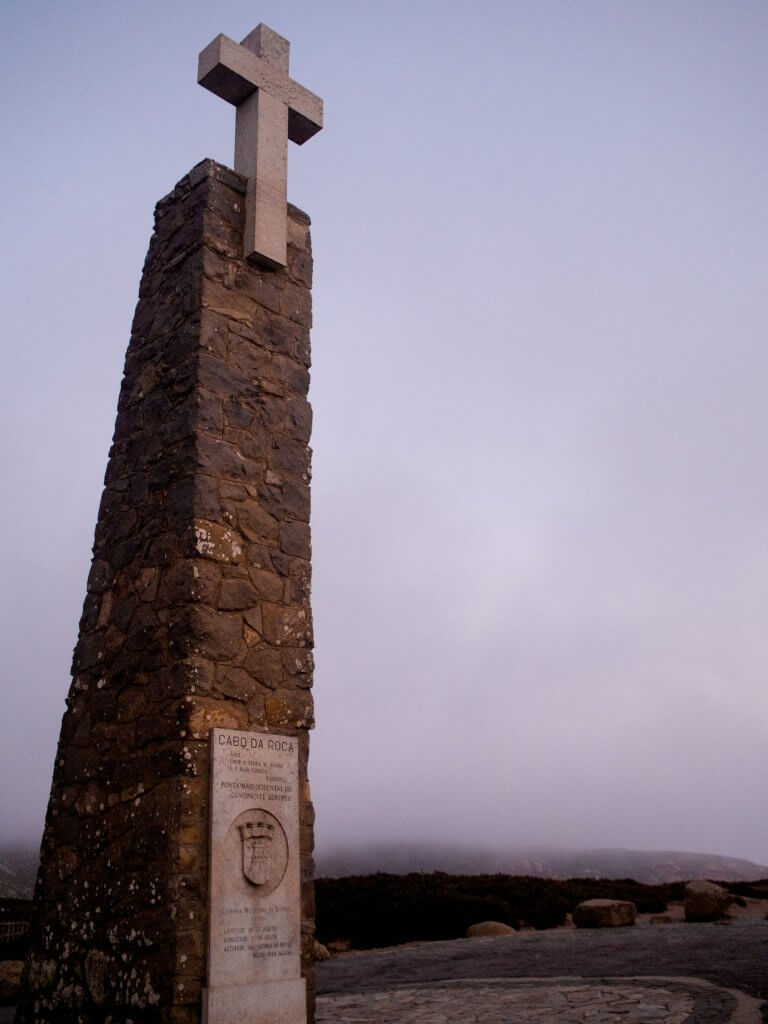 And yes, we had a heated debate with the Irish women in our group as to whether it really was more west than the tip of Ireland, but we decided it had been fairly called ‘the most westerly point of continental Europe’, so we all win. 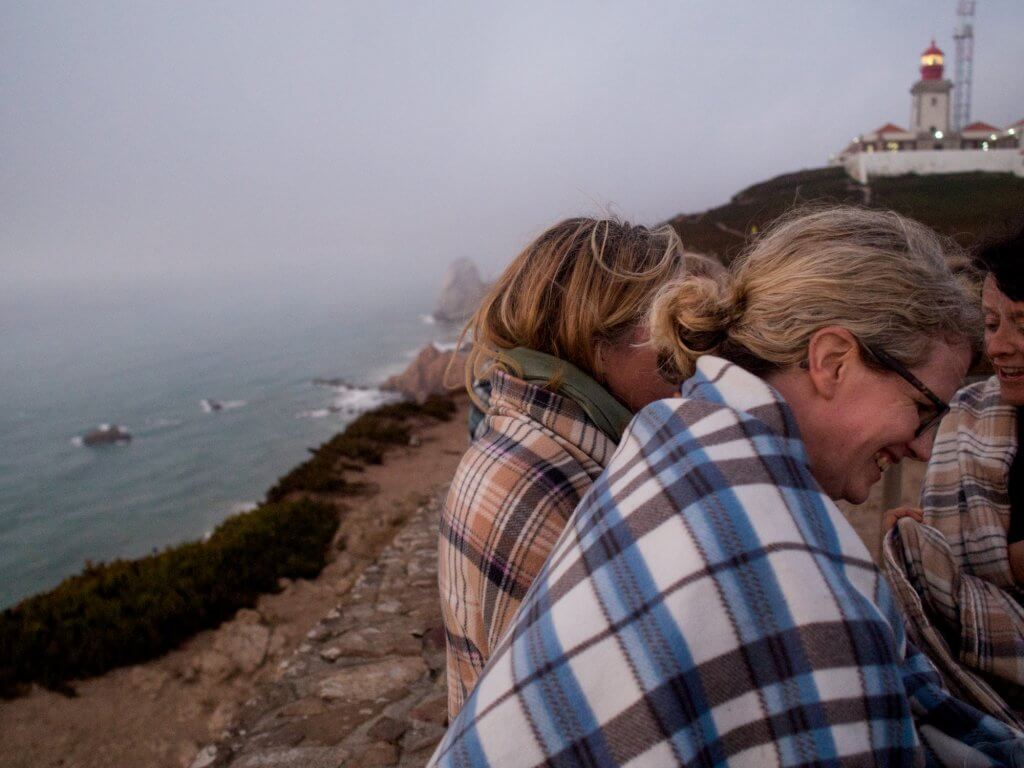 Sipping some local port and huddling around to keep warm, we would have watched the sun set but sadly an unexpected fog decided to creep in right at that moment! Unlucky, but it was a great end to the day none the less!

Big thanks to the guys at Safari Flamingo for being brilliant guides and showing us around Sintra (not sponsored – just enjoyed the trip)!